The people of Yokohama swear up and down that Yokohama is a very different place from Tokyo. Nevermind that the two abut each other, conspiring to create an uninterrupted expanse of urban sprawl. The Yokohama natives are proud of how different their city is, despite how it may appear to others. So say what you will about the area around Yokohama Station, the dizzying shopping and entertainment quarter. Today we’re going to talk about the adjacent Yokohama Bayside district, where there is no denying that you are no longer in Tokyo! The Bayside District encompasses Chinatown, a waterside promenade, and a number of parks, among other attractions. Start your day in Chinatown, which is easily accessed from the Motomachi-Chukagai station on the Minato Mirai train line, about 35 minutes from Shibuya. Step off the train hungry, because the most popular thing to do in Chinatown is pig out. You’ll see all-you-can-eat restaurants virtually every direction you look, as well as restaurants serving more elaborate courses and, on the other end of the spectrum, streetside stalls selling chinese pork buns, dumplings, and the like. If you can still stand the sight of food after all this, there’s a goldmine of shops scattered about selling hard to procure Chinese ingredients.

Squeeze in a cultural moment Kanteibyou temple was established in 1862, but been destroyed and rebuilt a number of times over its history. The current structure dates back only from the year 2000, but the gold, red, and other symbols of prosperity and good fortune transcend all temporal restraints. The temple functions as a cultural center for the Chinatown community, and of course also a popular stop for tourists. If you’re traveling about Japan, checking out various temples and shrines along the way, seeing this example of Chinese temple architecture is sure to conjure up some good juxtaposition.

With your chinatown vibe sated, it’s time to head to the water They don’t call it the Bayside District for nothing! When the weather’s fine, nothing beats a walk down the shore, with nicely landscaped park on the land side, and impressive ships harbored on the other. Views of greater Yokohama unfold before you, but you’ll have to share them with the pigeons!

Get off the beaten path, and up the hill, at "Minato no mieru" Hill Park. It’s a confusing name, but easy to find once you cross under the highway from the Chinatown side. You’ll have not only space to yourself, but long flights of stairs through lush greenery as well, as you climb up to the viewpoint, plaza, and rose garden at top. If you’re not in the mood to climb, hop aboard one of the frequently, 100 JPY (0.8 USD) “Akai Kutsu” (red shoe) buses that not only climb the hill, but also criss cross the Bayside District (see link below for more info).

It’s just the tip of the iceberg!

A large chinatown, beautiful bayside stroll, and hillside park don’t have to make for the only attractions you enjoy in the Bayside District, but they sure make a nice start! If you have the time, check out the Yokohama Marine Tower for even better views, or take a stroll down the Motomachi neighborhood’s high class shopping street. It’s all here for the enjoying, and absolutely nothing like Tokyo! 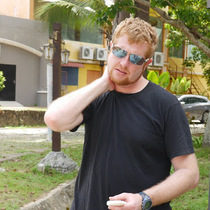