An Afternoon With Nature, History, Religion, Culture In Malmo, Sweden

Malmo is Sweden’s third-largest city and has some wonderful natural, historical, religious and cultural landmarks that can be perused over a free afternoon. If you’re in Copenhagen, Denmark, and you have a couple of hours to spare, I would recommend travelling to Malmo. It’s a brilliant destination for the lone traveller, couples, groups and families to check out. 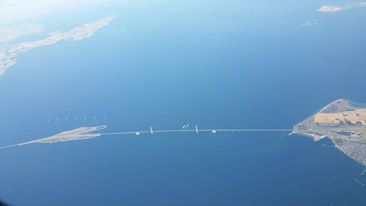 From Copenhagen’s Central Station, an Oresund Line train heading either directly to or through Malmo Central Station, departs every 10 minutes. The train journey from Copenhagen to Malmo lasts around 35 minutes and is a common journey that the Danes and Swedes both take when travelling for work or pleasure. A one-way train ticket from Copenhagen to Malmo costs 67 DKK (approximately 10 USD) and a ticket from Malmo to Copenhagen costs the same amount but you have to pay in Swedish Krona if you do not purchase a return ticket from Copenhagen. The train journey itself is a marvellous experience as you get to cross the Oresund Bridge where you can appreciate the clear skies and light blue waters with the wind turbines standing out in a row. Once you arrive in Malmo, you will immediately notice the beautiful canal outside the Central Station that runs through the city. There are a number of old stone bridges that will allow you to cross the canal in multiple places in Malmo. From the Central Station, you need to walk about 20 minutes to reach a fantastic haven of nature, which is the Castle Garden, and forms part of Malmohus Castle. During this scenic 20 minute walk, you will cross three bridges on your route.

Located on the Fortress Island (home to Malmohus Castle), Castle Garden is a lush area covering about about 12,000 square metres. It was officially opened in 1998 by a group of residents who wanted to create an organic garden that is free and open to the public for 24 hours a day.

Castle Garden is divided into different mini gardens that represent specific themes, flowers and plants. Walk around and find your favourite garden; there will certainly be one that stands out for you. I would recommend checking out Heidi’s Garden, which was created by garden architect Heidi Palmgren, and is a refined, stylish, uncomplicated and minimalist garden which primarily composes of green plants in various shades and shapes. The entire area is a brilliant location to have a picnic and appreciate the landscape. There is also a Castle Garden Café which serves homemade organic food from April to October.

The historical and educational Malmohus Castle Malmohus Castle, located on the Fortress Island and 5 minutes away by foot from the Castle Garden, was first founded by King Eric of Pomerania in 1434. However, the structure was demolished in the 16th century and so a new castle was built by King Christian III of Denmark in the 1530s when he ruled over Sweden. Today, Malmohus Castle has been restored to its 16th century glory and includes museums which have permanent exhibitions that focus on history and technology. There are also a few temporary exhibitions included each year.

Malmohus Castle has not only served as the home to royalty but was also a prison and a mint for Danish coins; when you visit it, you will see how it was able to serve such diverse purposes. However, it is important to note that whilst some of the exhibitions inside are fascinating; others seem somewhat arbitrary and a number of the artefacts do not include a description in English and, therefore, it may be a challenge to figure out their history and purpose. St. Petri Kyrka, which translates to St. Peter’s Church, is the oldest building in Malmo and dates back to the 14th century. The church can be reached by taking a 15 minute walk from Malmohus Castle or a 3 minute walk from Malmo Central Station. It is built in a Gothic style and is an exceptional medieval church that is still in use for sermons and celebrations. Whilst it is surrounded by modern buildings, its 105 metre-high tower makes it stand out in all of its glory.

The outside of the church is quite simplistic and there is a notice that states the following wonderful quote, “Every person also has a past to relate to. Like the 700 year old room, I as a human being must find a balance between living in the past and in the present. If I live only in what once was, I become a museum. And if I live only in the feelings and needs of the moment I soon become rootless”. The inside of the church is very white and airy and includes an impressive altarpiece, pulpit and font. However, what really stands out is the Merchant’s Chapel, which is inside the church. The Merchant’s Chapel received its name because it was built by local merchants and it is special because it includes some of the most well-preserved ceiling murals that have been discovered from the Middle Ages. Lilla Torg, which translates to Little Square, is a cobblestone square that was built in the 16th century and many of the buildings surrounding it were from this time. Lilla Torg can be reached by taking a 5 minute walk from St Petri Kyrka or a 7 minute walk from Malmo Central Station.

It is a charming area where locals and tourists come to eat, drink, shop and relax and it is well-worth the visit. A number of the cafes, pubs and restaurants have outdoor seating, which is perfect if you want to enjoy the sunshine which is abundant in the Nordic region. If you’re worried that it may still be chilly in Malmo, fear not as blankets are provided next to each chair in most of their outdoor seating so you have no reason not to sit outside! There are also a few quirky shops selling sweets, clothes and homewear in the area, as well as some souvenir shops from which you can pick up an item or two. Visiting this area is completely free and your only cost would be for souvenirs or food.

A quick get-away from Copenhagen

If you want to get away from the hustle and bustle of Denmark’s capital, Copenhagen, then visiting Sweden’s Malmo for an afternoon is a perfect way to do so. Indulge yourself in a relaxing environment where you can embrace nature, history, religion and culture. Malmo is a fantastic destination to spend a couple of hours and I would recommend visiting it in the summer so that you can enjoy eating under the sunshine, whether at Castle Garden or Lilla Torg.