Combine History And Art At Berlin's Colourful East Side Gallery

The East Side Gallery in Germany’s capital city of Berlin is a modern work of art on a significant piece of Berlin’s history. Striking and colourful murals cover part of the infamous Berlin Wall. Today an eye catching piece of public art, combine history and art with a walk along the 1.3-kilometre (0.8-mile) remaining section of the notorious wall that once split the city and nation in two. Located in the city centre, here’s why you should visit the East Side Gallery when in Berlin:

Brief history of the Berlin Wall Germany was once a land vastly divided. Four military zones were established after World War II, with zones administered by the four superpowers: the Soviet Union, the UK, France, and the USA. The three western sections were later merged, whilst the eastern section remained under Soviet communist rule. Tensions between east and west grew, culminating in the Cold War. Nowhere felt these tensions more than Berlin, a place that found itself divided between the democratic west and communist east.

Citizens of Berlin awoke on the 13th of August 1948 to find a thick wall dividing the city. Rapidly constructed overnight by the Soviets, the wall stretched for 48-kilometres (30-miles). It prevented people crossing between East Berlin and West Berlin. It was later extended to enclose all of West Berlin, an area that was totally surrounded by Soviet lands. The penalties for trying to cross the steel-reinforced, barbwire-topped, and heavily guarded wall were high; many people were shot and killed for trying to illegally cross the wall.

A moving memorial following the fall of the wall On November 9th, 1989, more than 40 years after the wall’s construction and following a period of intense civil unrest, East Germany announced that the gates of the wall would be opened. East Germans flooded to the checkpoints, demanding to be allowed to cross. A wave of East Germans crossed to West Germany, greeted by exuberant West Berliners on the other side. People began chipping away at the wall that same evening, with huge holes created in the once oppressive concrete divide. Official demolitions began in June 1990, and by October 1990 Germany had been officially reunified. The only remaining sections of the Berlin Wall were those that had been kept as historical monuments.

The East Side Gallery was established as an international memorial for freedom. Soon after the fall of the Berlin Wall, the longest remaining section was painted by more than 100 artists from various countries around the globe. Seeking to illustrate the political events from that time, the original works of art contained many bold statements and imagery. The memorial also remembers those who lost their lives trying to escape an oppressive regime and those who were separated from family and friends, their homes, or their work when the wall was erected.

Themes and artists of the East Side Gallery Prominent themes include freedom, human rights, and war, with many other social, moral, and thought-provoking messages also included. Slogans such as “Save the Earth”, “No More Wars, No More Walls”, “Stay Free”, “Get Human”, and “Dancing to Freedom” appear alongside more modern messages, such as one related to the banning of smartphones.

Numerous artists from around the world have contributed to the stunning artwork at the East Side Gallery. Artists include Andrej Smolak from Slovakia, Jolly Kunjappu from Germany, the USA’s Mary Mackey, Thierry Noir from France, Rosemarie Schinzler from Germany, and Russia’s Gamil Gimajew.

Imagery of the East Side Gallery The actual pictures reflect numerous artistic styles, with contemporary images sitting alongside more classic-style paintings and abstract works. Some of the most interesting works include a piece known as The Kiss that shows Leonid Brezhnev and Erich Honecker in a passionate clinch, a dove of peace chained to a hand that pokes through the bars of a prison cell to give the V for victory sign, and gas masks drawn to look like distorted faces.

Long faces with protruding lips, tribal designs, a peek through the windows of Berlin, Moscow, China, and everywhere else, children playing, the Grim Reaper, rainbows, and spectral figures are also sure to catch your eye.

A walk along the East Side Gallery 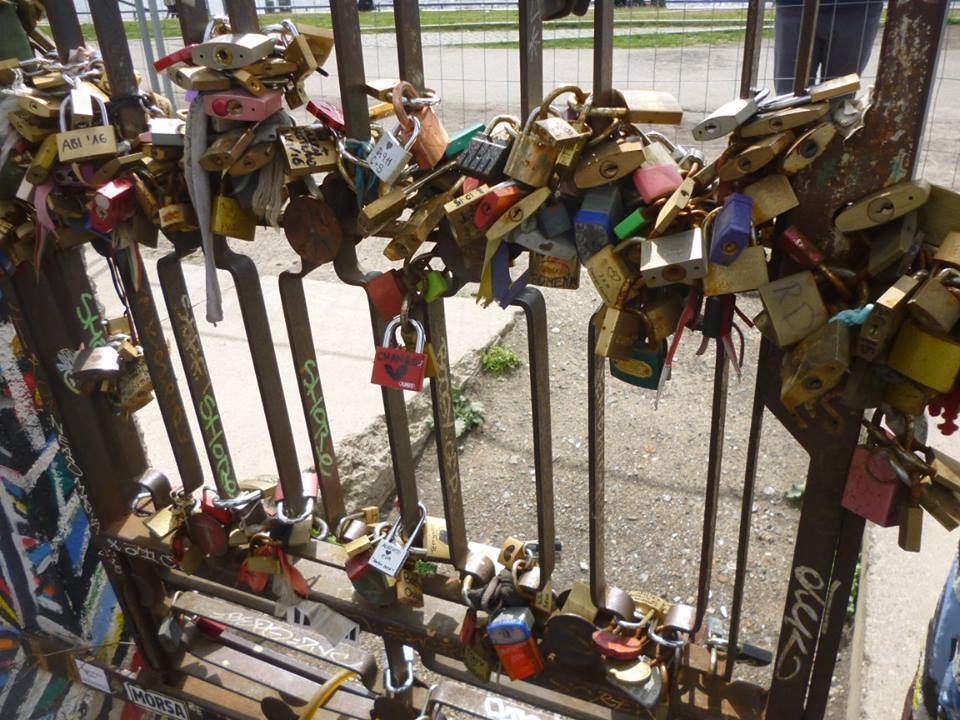 The best preserved and reconstructed images are mainly on the side of the wall alongside the footpath, with a metal fence now protecting the art. Step behind to the other side of the wall, however, and you can see more freestyle graffiti, with bold colours and lettering spelling out even more messages along with declarations of love and artists’ tags. You can also enjoy pleasant views of the river from the rear. One of the small fenced gaps in the wall is now home to many padlocks, left by people wanting to lock their love with a partner or other loved one. Allow at least an hour to walk the full stretch of wall and admire the artwork.

There are several other places around Berlin where you can see smaller sections of remnants of the Berlin Wall, as well as museums that tell the story of one of the world’s most oppressive structures.

The Berlin Wall Memorial, complete with an informative visitor centre, the replica of Checkpoint Charlie, and Mauermuseum are all top places to learn more about the Berlin Wall. You can also walk streets where the wall once stood, enjoying the freedom of moving where others once could not. The East Side Gallery, however, is the only Berlin Wall attraction to brilliantly merge art and history in such a spectacular manner.