Vietnam is an uprising, popular destination in Southeast Asia, not only for its breath-taking landscapes but also the sophisticated local cuisine that any traveler may fall in love with instantly (especially after tasting a bowl of pho soup!). While you can find strong influences of French, Italian, and Korean cuisine in the capital centre nowadays, the locals still love seeking out many small street stores in the hidden corners of Hanoi to enjoy our typical comfort foods. There is a huge range of street food to try, including different sorts of mini cakes, or bánh - some of my favorite food from childhood that I miss a lot now that I have been abroad for years. Bánh are usually referred to foods made from rice flour, wheat flour, or different kinds of flours mixed with various choices of fillings. Unlike in most Western countries, cakes in Vietnam are mostly not sweet but savory, and made in small sizes like snacks. Here are some that you must-try if you have time to explore the local street-food cuisine. Bánh tôm, originally known as Bánh Tôm Hồ Tây because of its originality from the West Lake (hồ Tây) area, is a shrimp patty made from deep fried julienned sweet potatoes. Bánh bột lọc is tapioca cakes, or dumplings, packed with shrimp, and served with sweet and sour fish sauce. This dish originates from the city of Hue, but is also a popular dish in Hanoi. Come to Ly Tu Trong Street on the corner of Ham Long, opposite to the church. Here you can find both bánh tôm and bánh bột lọc, along with many other kinds of mini cakes and street-food that the young locals love. You can expect the area to be crowded, as many young people come here during weekends. Bánh cuốn is steamed, thin, wide sheets of rice rolls filled with cooked seasoned ground pork, minced wood ear mushrooms (or fungi), and minced shallots (or fried onion), and served with fish sauce for dipping and herbs. The dish originally comes from the Thanh Tri District. There are vegetarian and non-vegetarian versions sold in the street markets as well. Another type of mini cake with similar ingredients but a slightly different taste is Bánh giò - pyramid shaped rice dough dumplings filled with pork, shallots, and wood ear mushrooms wrapped in a banana leaf. These kinds of bánh can be found at any time of the day, but I personally love getting them for breakfast instead of bread or a sandwich. Banh bao - a ball shaped bun filled with pork and other ingredients, such as noodles, cloud ear fungus mushrooms, and a boiled egg, is also popular as a breakfast treat. 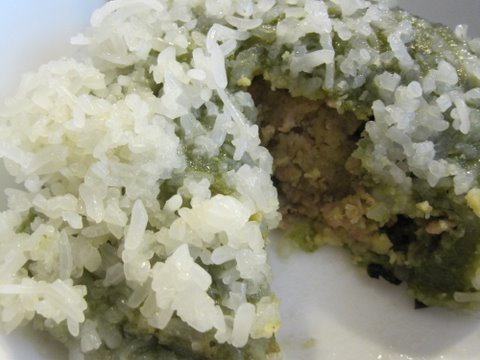 Both of these kinds of bánh are made of glutinous rice balls. Bánh khúc is usually boiled and covered with sticky rice, filled with mung bean, fatty pork, and wrapped with khuc leaves. This specialty can usually be found during February and March, in accordance with the Lunar Calendar. Bánh rán are usually filled with, or without, sweetened mung bean paste from Northern Vietnam, depending on your choice. Some of them are covered with sesame or sugar icing as well. If you happen to stop by a bánh rán store, also ask if they have bánh gối - a deep fried pastry stuffed with cellophane noodles, minced pork, and cloud ear mushrooms, served with fish sauce for dipping. If you happen to visit Hanoi during special holidays, such as the Lunar New Year’s Eve, the Lunar Full Moon, or the Cold Food Festival (also known as the Hanshi Festival), you will have a chance to taste the typical, traditional cakes, such as bánh chưng (rice cake), bánh trung thu (moon cake), and bánh trôi (boiled glutinous rice balls or floating rice cakes). Just before every Lunar New Year, family members used to gather together to make square-shape glutinous rice cakes wrapped in lots of layers of dong leaves, filled with fatty pork, mung beans, seasoned with black pepper, and served with fish sauce, pork roll, and pickled onions or vegetables. Bánh chưng requires long hours of preparation, many ingredients, and can be quite complex as it has to cook in boiling water in a huge pot for 10 to 12 hours. Nowadays, less families are preparing bánh chưng themselves, but rather choosing to buy them from the market. Due to an increasing demand for street-food diversity, nowadays, the locals have also adapted to the changes, and brought some of the dishes from Southern Vietnam to Hanoi. Some recently popular cake dishes you can find today are called bánh xèo - fried rice cakes with shrimp, pork, bánh tráng trộn, which is a stirred salad dish made with rice papers, coriander, egg, dry beef, and many moreseasonings.

Tips for eating around Hanoi

Hanoi’s street food stores and stands are spread around the city, though most of these yummy dishes can be found around the historic central area. To look for the closest spots around you, download the Lozi application and search via your phone’s GPS. Something you want to keep in mind is that most sellers do not speak fluent English, but the locals are friendly and eager to help you, so do not be afraid to ask them to order for you! Though eating at street-food stands, or small old local restaurants, sometimes does not appear hygienic, enjoying the local cheap-eats this way is one of the best means to enjoy the local street-foods.

Explore Hanoi
Good things are meant to be shared!