Gorgeous And Quirky Museum of Bags & Purses In Amsterdam

Amsterdam is full of a number of museums and one that is certainly unforgettable is the Museum of Bags & Purses. It is not your “average” museum, and it requires one to have an acquired taste for history, culture, design and importantly, bags and purses (wallets). The endearing Museum of Bags & Purses consists of over 5,000 bags and purses starting off with those from 1600 AD to the present day.

Based at Herengracht 573, the Museum of Bags & Purses is situated in a gorgeous canal house in the centre of Amsterdam and overlooks the Canal Ring Area, which is on the UNESCO World Heritage List. It is open from 10.00 am – 5.00 pm daily and ticket prices vary contingent on age. The cost of an adult ticket is 14 EUR (14.75 USD) and for a student it is 9.50 EUR (10 USD). Children that are aged 6 or less are allowed entrance for free. The Museum was created by Hendrikje and Heinz Ivo, a married couple who developed an interest in collecting bags. They searched near and far for different types of bags and opened the doors of their home in Amstelveen for the world to admire and enjoy their collection of bags. However, after ten years, their extensive collection could no longer fit in their home and they subsequently moved all the items into a beautiful canal house in Amsterdam at Herengracht, which is now the Museum of Bags & Purses. The Museum includes detailed descriptions in multiple languages including in English. For example, in respect to the aforementioned picture of bags, there was a useful and informative label educating visitors on how the bags were created and the python skin that was used as part of their exterior.

It is not just all about the ladies The Museum of Bags & Purses provides a brief history on the usage of bags and purses by both men and women throughout time. For example, it explains that as clothing did not have inside pockets in the Middle Ages, the necessity of a bag and purse was created. As a result, from the Middle Ages and up until the seventeenth century, bags and purses were carried by both men and women (and in the case of men, they would often hang their bag or purse from their belt). However, with the introduction of inside pockets in the seventeenth century, personal bags grew into disuse for men. Now if you’re a man, wouldn’t you have liked to know what type of bag you would have had in the Middle Ages? The only place to find out is the Museum of Bags & Purses. Much of the emphasis in each section of the Museum of Bags & Purses is placed on the materials, construction and uses of the various items over time. The incredible workmanship and craftsmen is absolutely outstanding. Some of the bags are so cleverly constructed to appear as something entirely different including the rather delectable cupcake handbag in the photograph. This cupcake, I mean handbag, was designed by Judith Leiber and is covered with Swarovski crystals and has to be one of my favourite items in the entire Museum. This is because it is one of the rather unusual and quirky handbags in the Museum. The Museum of Bags & Purses explains, however, that unusual and quirky bags were actually quite frequently produced throughout the centuries because every designer wanted their bag to be more noticeable, and so would give them unusual forms or decorations and; the 1930s was the period where things started really heating up on this front. The Museum of Bags & Purses houses a number of famous brands including Chanel, Dior and Prada. One of the most striking items in the Museum would have to be the vintage pop art, “Mademoiselle Clutch”, which was created in 2001 by Karl Lagerfeld for Chanel. The Museum teaches that the “clutch bag” has been popular since the 1920s and 1930s and really made its mark in the late 1940s and 1950s. It stands out clearly for its easy-to-hold-in-the-hand purpose and small size meaning that it is perfect for a short outing with friends and family. The Museum also teaches, however, that the clutch bag had some competition in the 1960s when the focus shifted to the “shoulder bag”, which became not only an accessory but a perfect item for practical use for the busy person who is out and about. Nevertheless, the clutch bag — with the addition of a strap that could be hidden — was a brilliant introduction. This is because it was a “shoulder bag” disguised as a “clutch bag”. As women tended to have bags for every occasion and time of the day, the handbag became a fixture for a woman. The Museum of Bags & Purses explains that bag designers were often inspired by the art movements and the Art Deco phase was the most prominent. Art Deco is all about geometric shapes combined with bright primary colours. The photograph above is of a bag by Karl Lagerfeld for Chanel. He named this bag, “Choupette”, which is the name of his cat and one could argue is inspired partly by the Art Deco phase and the desire to create a clutch handbag with a strap.

Dutch Tulip handbag is an absolute must 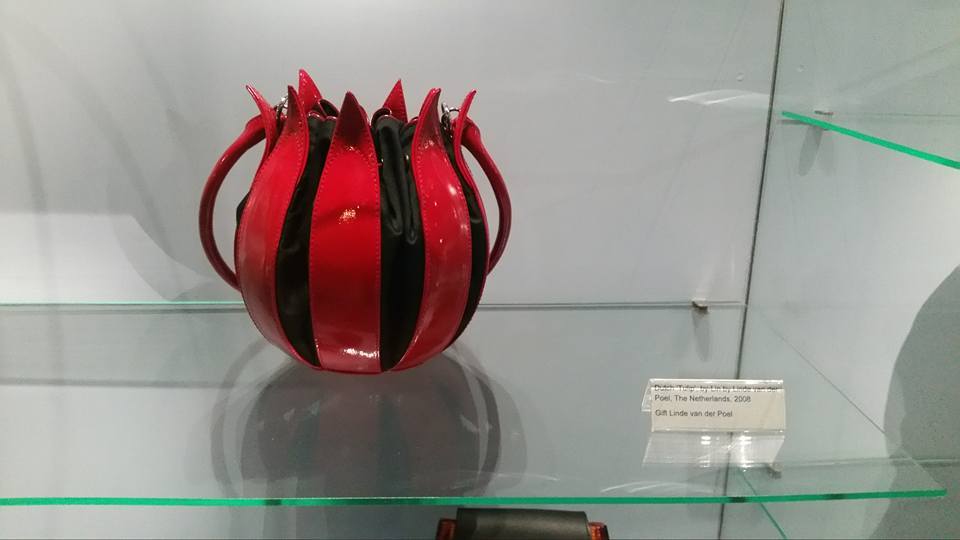 Alongside the unusual Cupcake bag by Judith Leiber, the Tulip shoulder bag designed by Linde van de Poel has to be a favourite, too. With the Dutch having such a great love for tulips that they even have a dedicated Tulip Museum in Amsterdam, the Museum of Bags & Purses would be incomplete without a bag in honour of this beautiful flower.

All bags by Linde van de Poel are fair trade and made according to traditional methods; if you would like such a bag, you will be pleased to know that the Museum of Bags & Purses has its own Museum Shop where you can unsurprisingly purchase bags and purses. Its product range varies and it sells a variety of Dutch and international brands to visitors. The Museum and the Shop appeal to the curious and history-loving fashionista and really show how personal objects can evolve over time. The Museum itself is very quiet and has a real peaceful feeling to it. It’s a wonderful place to wander around in a morning or afternoon. With the Museum of Bags & Purses being based inside a traditional Amsterdam canal house, it is a wonderful opportunity to see the interior of how such a house looks. There are two specific rooms that are absolutely exquisite and they are known as the period rooms. The rooms are part of the Museum Restaurant where one can make a reservation to have lunch or high tea. The small period room dates back to the seventeenth century and includes a painted ceiling, representing the City Virgin of Amsterdam and a beautifully decorated chimney piece and is pleasantly intimate. The large period room dates back to the eighteenth century and is reminiscent of a fabulous palace and has the most spectacular masterpiece on the ceiling, as per the photograph, which was painted by Louis Fabritius Dubourg from Amsterdam.

End your experience on a high with Fashion High Tea One of my favourite pastimes is having afternoon tea and I am very pleased to share with you that the restaurant in the Museum of Bags & Purses offers the opportunity for you to enjoy a very glamorous Fashion High Tea. It’s the perfect combination of small delectable items including ones that are shaped and inspired by iconic handbags that are included in the Museum. These include the Chanel 2.55 bag and a chocolate Moschino bag. The cost for afternoon tea per person is 42.50 EUR (45 USD) and is in addition to the entrance fee (that has to be paid even if you are only intending on having afternoon tea and not perusing the Museum). I found that the most wonderful part of the afternoon tea experience was being able to peer out of the window and see the world-famous canal with boats sailing past and birds chirping and flying from one tree to another. It was such a cultural and relaxing affair with sheer luxurious and edible handbags for my tastebuds to devour.

Whilst the Museum of Bags & Purses is not the most talked about museum in Amsterdam, it certainly should be because it offers something more than handbags. It offers an introduction to history, culture, fashion and evolution of items that were needed by both men and women. It is an informative, colourful and exciting venue where you can learn and be playful at the same time. There is something very charming about this little stop on Herengracht and I suggest that you stop over for an hour, or two or three and well, why not throw in having Fashion High Tea in this beautiful canal house?