Places To Visit In The East And West Of Shinjuku

Although Kagurazaka is a little less popular than the “glamorous” part of Shinjuku, this district has its hidden charm. Kagurazaka is most well-known for its slopping street, its home to the French community in Japan and a large concentration of French restaurants. In the early days, many geisha houses were set up in Kagurazaka and the town functioned as Japan’s premier pleasure quarter (or Hanamachi in Japanese). Today, many geisha houses, traditional restaurants and confectionary shops still exist, retaining their nostalgic flavor. Take a leisurely walk down Kagurazaka’s alleys and walkways to explore this beautiful town.

You can reach Kagurazaka through the Lidabashi Station (served by the JR Chuo Line and the Oedo, Tozai, Yurakucho and Namboku subway lines). From there, the bottom of the Kagurazaka slope is just a short walk away. Alternatively, you can stop at the Ushigome-Kagurazaka Station, and it will lead you to the top of the Kagurazaka slope. The Kagurazaka Station is located near the Akagi Shrine. The French Institute in Tokyo is a place worth visiting. The French library and courtyard give visitors a taste of Paris with its laid back setting that you would surely fall in love with!

Apart from that, we also recommend visiting the Akagi Jinja. Built in the Edo period, this shrine is a branch of the shrine at Mount Akagi Gunma prefecture. It was renovated by the famous Japanese architect, Kuma Kengo, who also designed other key landmarks like the Suntory Museum in Roppongi and the Asakusa Culture Tourist Info Center. Also, what makes this shrine stand out is that it has its very own Akagi café!

Access: 2 minute-walk from Kagurazaka Station Another unique café in Kagurazaka is the Manju Café (Manju is a traditional Japanese confection). Here, you can taste manjus of a variety of flavors, from anko (red bean) to cheese! A cup of hojicha, green tea and coffee would definitely make your snack better. Do look out for the resident cat!

Iidabashi is a station along the JR Chuo Sobu Line. It is also served by the Tokyo Metro Tozai Line, Yurakucho Line, Namboku Line, and Toei Oedo Line.

Tokyo Dome City Just a stone’s throw away is the Koishikawa Korakuen. This is one of the best Japanese gardens, well preserved since the Edo period. The garden initially followed the Kyoto style and was later remodeled to follow Chinese gardens. Quiet and tranquil, this park is a true gem in the city. 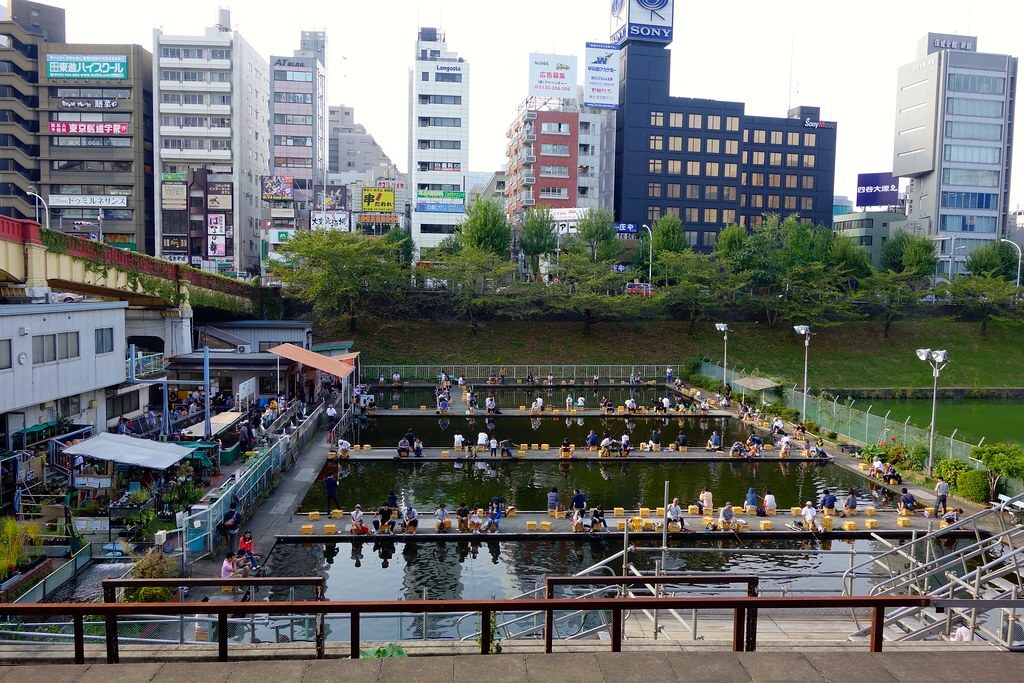 Ichigaya is an old residential and business district in Tokyo that lies just beside the Imperial Palace. Various institutions such as Hosei University, Chuo University and Japan’s Ministry of Defense are located there. Ichigaya is also close to the Yasukuni Shrine, one of the most controversial shrines in Japan regarding WWII.

Ichigaya Station is served by the JR Chuo-Sobu Line, Tokyo Metro Yurakucho Line, Tokyo Metro Namboku Line, and Toei Shinjuku Line. Chūō Line (Rapid) services pass the station as well. The Ichigaya Fish Center is a great place to enjoy some good fishing (as Ichigaya is comfortably located on the outer moats of the Imperial Palace)! They have a variety of packages and two pools for fishing. Once you’ve got your catch, you will receive points based on the weight of the fish caught. The fish will then be released to the pool to be “caught again”. Using your accumulated points, you can redeem prizes or get your next fishing session free! Ready for a good catch? 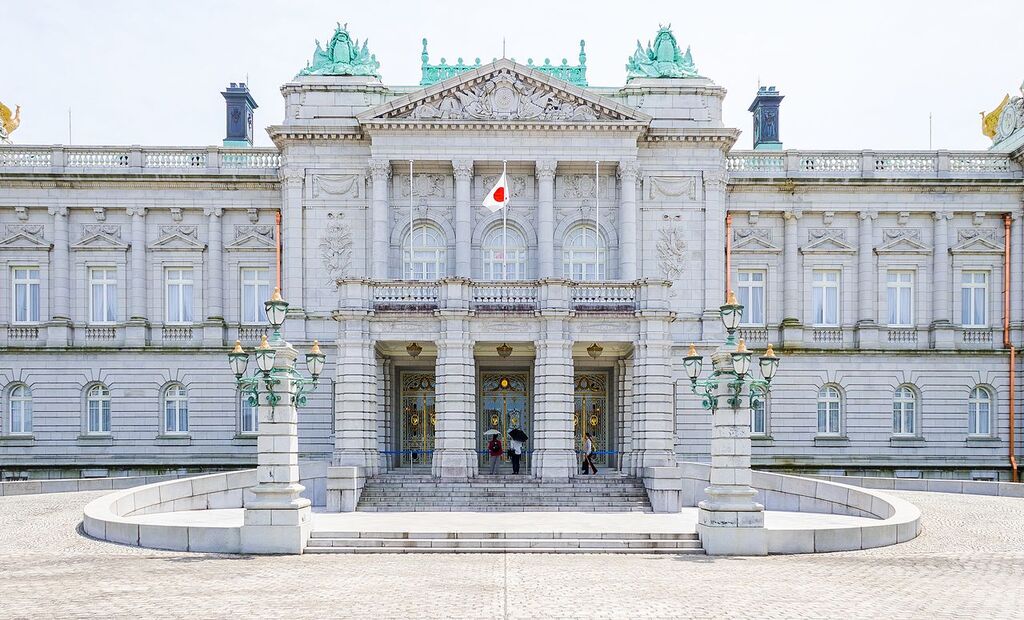 Yotsuya is a pleasant neighborhood with rich history. Akasaka Palace, aka, Akasaka State Guest House is located here, a building closely modeled after the Palace of Versailles in France. It is used to accommodate overseas diplomats during their time in Japan. Also, Yotsuya is also home to Sophia University, another prestigious institution in Japan founded in 1913.

Price: Front garden is free but entrance through west gate will cost JPY 1000 (8.80 USD) per adult 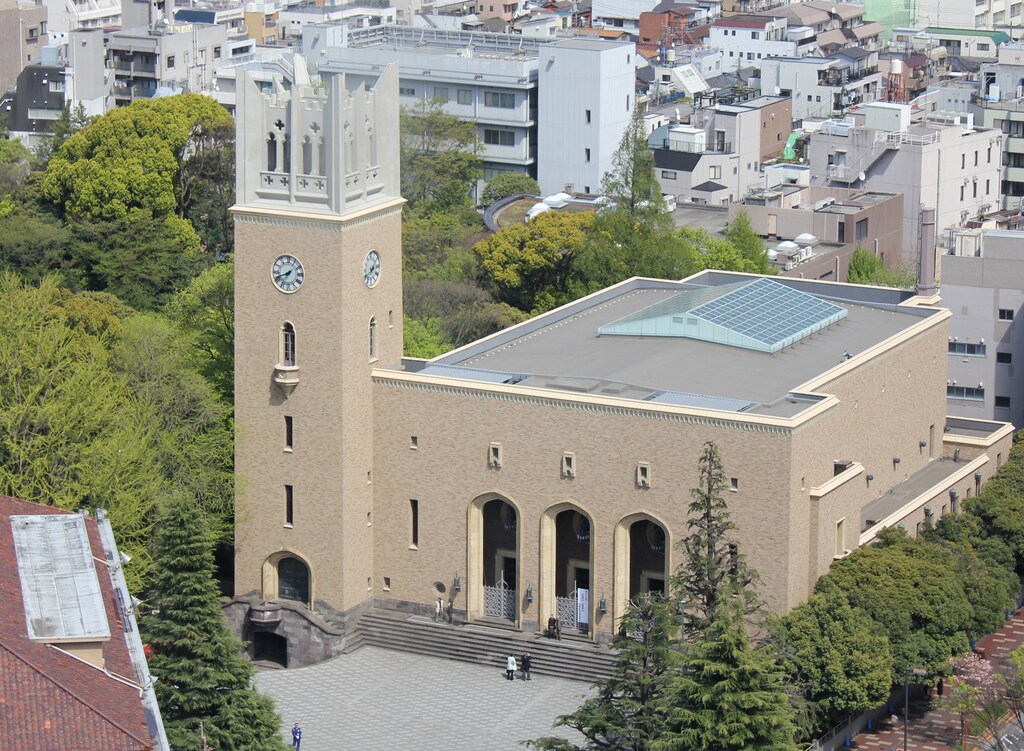 Nishi Waseda is home to the Waseda University, one of Japan’s oldest and most prestigious universities. Take a relaxing stroll in the campus and discover its unique architectural features and designs. Also, do drop by its university cafeteria, Okuma Garden House, for an affordable meal. They serve other food as well such as the Chef’s Special Set, pasta, ramen, sushi, katsu-don and more! The nearest train station is the Nishi-Waseda Station on the Tokyo Metro Fukutoshin Line.

The name “Takadanobaba” has an interesting origin. In the past, Shogun Tokugawa Iemitsu (the head of the government during the Edo period) frequently used the place for horse racing and horse riding, hence earning the name “baba” (which means “horse place” in Japanese). Located near the Waseda University, Takadanobaba has quite a number of affordable shops and eateries specially catered to the students in the vicinity. Also, Takanobaba is a major transport hub for commuters in Tokyo – commuters on the Seibu Shinjuku Line, Jr Yamanote Line and Tokyo Metro Tozai Line can easily transfer at this station.

You can’t possible miss the two large Astro Boy murals just outside Takadanobaba Station! Astro Boy is one of the earliest cartoon characters in Japan and many people are familiar with this anime character. Amazingly, Takanobaba is the supposed birthplace of Astro Boy. If you pay close attention to the train melody played at Takadanobaba Station, you’ll notice it is a song from Astro Boy!

Access: 1 minute walk from JR Takadanobaba Station. One mural is located underneath the JR railway right in front of the bus stop. The other mural is close to the road intersection.

Shin-okubo is famously known to be the “Korean Town” in Tokyo with a large number of Koreans residing in the neighborhood. At Okubo-dori, you can find everything from Korean restaurants and Korean supermarket, to K-dramas and Kpop. Shin-okubo is a station on the JR Yamanote Line. It is a 3-minute walk to the Okubo Station on the Chuo Sobu Line.

If you’re looking to have some good Korean BBQ in Tokyo, then Shin-okubo is definitely the right place to go. Don’t miss Korean street snacks such as Hotteok (sweet Korean pancake), gimbap (Korean sushi roll) and fried chicken!

One popular Korean restaurant you cannot miss in Shin-okubo is Tonchan. It serves amazingly delicious Korean grilled barbecue and other dishes such as Korean pancakes. The best way to enjoy Korean-style barbecued meat is, of course, to use a piece of lettuce to wrap the meat with some rice and some side dishes. Great food that hits the spot!

Several of the tallest buildings in Tokyo are in Nishi-Shinjuku, including many great examples of modern Tokyo architecture. The most prominent building with unique architecture is none other than the Mode Gakuen Cocoon Tower. Its sleek, modern and futuristic exterior is truly an art in itself!

See the best of Shinjuku

Many tourists recognize Shinjuku as a bustling and glamorous area packed with entertainment centers, shopping malls and high-rise skyscrapers. However, this article aims to shed light on the different side of Shinjuku, that offers many points of attraction worth visiting. Visit East and West Shinjuku today! Taking the road less travelled might give you a pleasant surprise! A nature lover with a curious mind, Charmain enjoys exploring the world for the best local experiences. She documents all her travel journeys in careful detail and hopes to turn them into...Read more
Want to contribute as a Local Expert?
Register Here
Hotels
Lowest Price Guarantee