Read Before You Visit: A Guide To The City Palace In Jaipur, Rajasthan

Jaipur, located in the state of Rajasthan, India, was founded by and named after Maharaja Sawai Jai Singh II in 1727. The word Maharaja originated in Sanskrit, and is used as a title to represent a Hindu prince or king, and is greater in power than the title Raja, which also refers to an Indian prince or king. For anyone taking a journey to the beautiful city of Jaipur, your trip would not be complete without a tour of the City Palace. Located northeast of the city center, you’ll find a beautiful complex built between 1729 and 1732, by Sawai Jai Singh II, which is the City Palace. Being enthusiastic about architecture himself, Sawai Jai Singh II also had aid from the two architects Vidyadhar Bhattacharya (who was the chief architect in the royal court) and Sir Samuel Swinton Jacob during the designing of the premises. Pulling inspiration from European, Mughal, and Rajput architectural styles, you will be captivated by this royal and majestic, once-thriving palace. Over the years, due to the wear and tear of time, there have been gradual restorations of the palace building within the walls. As well as the additional buildings, such as the Mubarak Mahal, which was built in 1890 along with the Chandra Mahal that is still used by the royal family of Jaipur today. However, the outer wall still remaining is from the original design. The entrance to Mubarak Mahal, the Palace of Welcome, will greet you with an elaborate marble gate with brass doors. This area was once used, during the early 20th century, to welcome foreign guests, such as in 1911 when King Edward and Queen Alexandria of England made a visit, as well as the Prince of Wales along with Lord and Lady Mountbatten in 1922. There is also a clock tower located in this vicinity that is widely seen at a distance from other areas of the city.

A look into the meaning of the seven floors 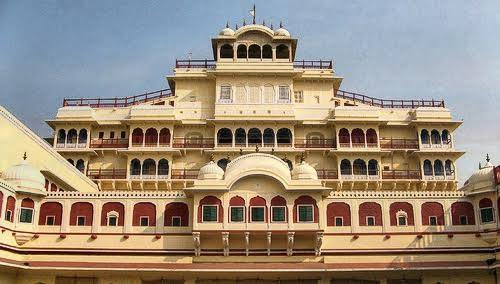 The Chandra Mahal, known as the Palace of the Moon, is made up of a glorious seven stories, is a part of the earlier structures, and was built between 1727 and 1734. Each floor of this rustic red and cream colored façade was given a specific name. You’ll notice the first and second floors seem to blend seamlessly together, creating more of a high-ceilinged hallway. This is known as Sukh Niwas, or the Hall of Rest, and where you’ll find the Maharaja Sawai Man Singh II Museum, and the royal family’s dining room. The third floor is known as Rang Mandir, meaning the Temple of Color. Shobha Niwas is the name for the fourth floor, and is referred to as the Hall of Beauty, housing several paintings, floral décor, and unique colored mirrors that act as artwork along the walls. The fifth floor is known to be a royal retreat during the monsoon season, which usually occurs from September until late November, and is referred to as Chabi Niwas, the Hall of Images. The sixth and seventh floors are known as both Shri Nawas or Mukut-Mandir, which is similar to saying crown of the home, or palace in this case, and are used by the royal family to look out over the city, enjoying an incredible panoramic view of the surrounding hills and the garden area down below. At the very top, you’ll be able to see the residential flags flying!

View pieces of the past inside the museum The first floor of Chandra Mahal is the only open area available to be toured by visitors, as it is still used today by the royal family, and here you’ll be able to gain entrance to the Maharaja Sawai Man Singh II Museum. Once inside, there will be galleries showcasing photographs of the royal family, along with paintings, and various pieces of clothing, costumes, and tapestries. There is even a section of the museum where you can view small cars, and carts, that were used during the glory days of the King’s rule. In the Sileh Khana, or armoury, you will be able to view one of the largest collections of fine weaponry and antique handguns in India. There are many swords that are of historical importance, with the names of Mughal emperors, such as Shah Jahan and Jahangir inscribed onto them. These weapons are absolutely beautiful as many of the hilts are made with crystal, ivory, silver, and even jade. There are also many semi-precious jewels adorning the swords and daggers.

You’ll be delighted to know that the City Palace is open daily from 9:30am until 5:00pm with an entrance fee of 400 INR (5.86 USD) for foreign tourists, including entry into Jaigarh Fort which is 10.2 km (6.3 miles) away, and remains valid for a period of 2 days. For Indian nationals the price is 100 INR (1.46 USD), and these prices also include the use of a still camera. Keep your entry ticket on you, as you will need to present this in order to gain entrance into the museum. You want to set aside at least 2 or 3 hours of your day for the touring of this incredible palace. Hawa Mahal is extremely close. In fact, it’s only one street over on Hawa Mahal Road, taking no more than a 10-minute walk. After your visit, you will also find many cafés and restaurants nearby to enjoy a nice lunch or dinner with your family and friends.