Stroll Around Tainan's Anping Old Fort And Its Surrounding The history of Anping Old Fort

Anping Old Fort is a historical fort built by the Dutch in the 1600s. During the Dutch colonization, this fort had full view of the sea so the Dutch could monitor ships bringing supplies and reinforcement from Batavia (now Jakarta, Indonesia). Anping Old Fort has witnessed many historical events, including the surrender of the Dutch that lead to the fort being the castle of Zheng Cheng Gong for three generations. Finally, after more than three hundred years of events, the fort is now a famous historical landmark in Tainan City. Anping Old Fort nowadays serves a historical museum, along with a nice park that comes with it. Since it has gone through countless reconstruction in the past hundreds of years, the fort has lost many of its original structures. There are, of course, some original features that are kept, such as the 70-meter wall of the Anping Old Fort, but a few parts such as the observatory deck is considered new. As for the exhibition area in the museum, there is plenty of historical information, both in Chinese and English, which one can gain. After a visit at the Anping Old Fort, it is mandatory to explore the busy and traditional Anping Old Street. These streets were the original settlements during the Dutch colonization, hence making this one of the oldest streets in the country. Of course the streets have been renovated, but it is still the streets where pedestrians would walk on back in the day. This old street surrounds the area of the fort, and many travelers are fond this street due to the presence of the many Taiwanese traditional foods, shops, and gaming stores. You can find food and souvenirs with various prices from 30 NTD (approximately 1 USD). Getting to Anping Old Street is quite simple thanks to the Tainan City Bus services. From Tainan Station, it is possible to take buses number 2, 88, 99, and get down at Anping Old Fort stop. The opening hours of the fort are from 8.30am to 17.30pm. To get inside the fort, there is an admission fee for travelers that cost 50 NTD (approximately 1.50 USD). Additional information is available at the visitor center in the Tainan Main Station, which is located just before the station’s front entrance. Taking a stroll at the fort and its surrounding would only take up a few hours of your day, so feel try to add other destinations such as a walk through the city.

As a tourist site in Tainan, Anping Old Fort and its surrounding are indeed destinations for those who want to learn about the local history of Tainan City and Taiwan itself. The museum, along with its observation deck and old wall ruins, and the old streets have become go-to destinations for both travelers and locals who want to have a nice stroll outside. It’s convenient transportation is also a plus side since travelers don’t always have their own transportation. Hence, for travelers who want to stop by at Tainan City, then don’t forget to visit Anping Old Fort and its surrounding! 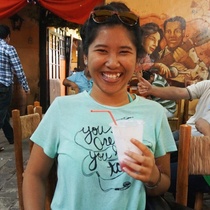 Hi! I’m Beth. I’m a 22-year-old Indonesian student who loves to travel the world. I am currently studying Spanish in a language university in Taiwan, and I hope to graduate in 2016 with the...Read more
Have a question? Ask fellow travellers and travel experts here.
Want to contribute as a Local Expert?
Register Here
Hotels
Lowest Price Guarantee

Explore Tainan
Good things are meant to be shared!