The Catlins: A Trip To The Edge Of The World

Wild, rocky coasts, vast sandy beaches dotted with sea lions, lush rainforests, and picture-perfect waterfalls — this is what you’ll experience if you make the journey to the Catlins in southern New Zealand. If you love the salty sea air in your lungs and the icy polar winds in your hair, and if you love taking the road less travelled, head South. Luckily there’s a route for you to follow. The Southern Scenic Route is relatively well sign posted and includes most of the highlights.

The Catlins are close enough to the city of Dunedin that you could knock off the highlights in one day. I know this, because my friends and I tested the theory a few months ago. It was a long day (8am departure, 10pm return) but we took our time at each of the sites that we visited (all four of us are hobby or professional photographers so we needed time) and we felt like we had seen the best of the Catlins. However, I would recommend taking two or three days to explore further, rather than attempting the one-day mission. It’s simply too beautiful down there, and there are plenty of accommodation opportunities that would save you the three hour drive back to Dunedin in the dark, after a long day of hiking and exploring. Our first stop on the itinerary was Nugget Point lighthouse. Naturally, it was not actually stop number one. There were so many shouts of “stop the car!” before we even left Dunedin, that a rule was created allowing only one ‘highway stop’ each, between every item on the itinerary. The lighthouse is about two hours south of Dunedin. From the car park, a walkway meanders along steep grassy hills, taking you across a natural bridge to the lighthouse. From the viewing platform, you can look along the coast to the North and South, and observe the seals resting amongst the rocks and frolicking in the ocean. The theories as to why the place is called ‘nugget point’ are as varied as the sizes and shapes of the rocks that rise up out of the ocean. Evidently the rocks are ‘nuggets’, but are they chicken nuggets, or gold nuggets? You decide.

After we’d had our fill of seal spotting, we headed further into the Catlins, through Owaka. We didn’t have time to stop there, but if you turn off towards Surat Bay, you will meet some of the larger, more boisterous sea lions that call the Catlins home. If you’re there over the summer, the young males will be fighting all along the beach, showing off their physical prowess to impress the females (sound familiar?). Despite the stories, they are unlikely to chase you unless you are as bold and curious as they are, or disturb their afternoon nap. Nonetheless, they do have sharp teeth, so I strongly encourage abiding by the advice given by the Department of Conservation: stay at least 10m away from seals and sea lions. Between Owaka and Papatowai are the Purakanui Falls. The gentle 10-minute walk takes you through native New Zealand rainforest. Gigantic tree ferns tower above you, and tiny playful native birds named fantails after their fan-like tails (or ‘piwakawaka’) will accompany you, making you feel like you’re in a Disney movie. The falls themselves are not particularly large, or particularly high, but they are strangely entrancing. Three distinct steps in the rock face make for a photogenic waterfall, and you can get up close by wading through the pleasant, shallow pool at its foot. Watch out though, the water is icy, and your feet will rapidly lose feeling, so make sure the photographer is ready and quick on the shutter button! Other waterfalls to check out in the area include Mclean Falls and Matai Falls, both are located on the Southern Scenic Route. Our end goal was Slope Point, the southernmost point of New Zealand’s mainland, but on the way, we also stopped off at the Tautuku bay lookout. The wind was wild, and seemed to be coming straight from Antarctica, but we stood and breathed in the salty air for a while. We needed a moment to take in the view; the grey Pacific rolling into a half-moon bay of golden sand, and the expanse of deep green native bush behind it with a haze of salt-heavy air blanketing the forest canopy.

Just past Tautuku Bay is the Whistling Frog café, perfectly placed for lunch or coffee on the journey. The staff are lovely, and the fries have an incredible flavour that we just couldn’t place! We agreed upon some paprika and garlic, but you’ll have to try them for yourself to see what it is that makes them so darn addictive. The café is also close to the Cathedral Caves, a highlight of the Catlins, which we were unable to visit due to our lack of cash (there is a small cash entrance fee of NZD5 - about USD3.50). Hence, those who plan to visit the Cathedral Caves should ensure that you are carrying sufficient cash at all times.

Once you’re refreshed and ready for some more exploring, Curio bay is even further south along the coast. Here, you’ll find a petrified forest — recognisable fallen trees which have been petrified in the rocks over centuries. Take note of the conditions, as the trees are only visible at low tide. Around the corner is the aptly named Porpoise Bay, where I have swum with dolphins multiple times. No boat, tour, or guide required. Just go for a swim and chances are some porpoises will come and play. This is polar water though, so perhaps observe the dolphins from a distance if you’re visiting between March and October, and even in summer - bring a wetsuit!

On the point between Curio Bay and Porpoise Bay is a reasonably priced campground, a good place to spend the night if you’re planning on heading further South, or if you find that it’s a little late in the day to start the drive back to Dunedin.

The Lodge at the Hills

No access to lookout on Slope point during September to December

Slope point is found on private land, which is used for farming year-round. This means that there is no access to the lookout during September and December, mainly for the protection of newborn lambs. We arrived at our final destination at around 4pm, giving us an hour to enjoy the apocalyptic atmosphere before darkness closed in. It was eerily still. The sky and ocean blended to create a dusky gradient, as hazy fog drifted in from the West. Windblown tussocky headlands, vegetation diminishing the closer you get to the ocean - finally leaving only red clay cliffs leading to the silvery waters of the South Pacific. If you’ve ever wondered what it’s like to stand at the edge of the world, this is the place to visit! 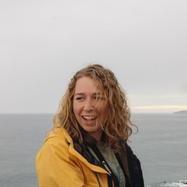 I am a twenty-something writer and photographer with a wandering soul and a deep connection to the ocean. I lead a double life, as I also study Geography at Otago University in New Zealand, work as...Read more
Want to contribute as a Local Expert?
Register Here
Hotels
Lowest Price Guarantee

Explore South Island
Good things are meant to be shared!