The Top 5 Reasons To Make Curaçao Your Next Break

Strolling down cobblestone streets, admiring pastel-hued colonial architecture and hearing conversations in Dutch, you could be forgiven for thinking you’re in Holland, not a Caribbean island just off Venezuela.

Curaçao is the largest of the “ABC” islands (Aruba, Bonaire and Curaçao), but it’s not your average Caribbean destination.

Like its more well-known neighbor, Aruba, Curaçao used to be a part of the Netherlands Antilles, a group of islands once ruled by Holland. The island became an independent country in 2010; however, it still operates under Dutch sovereignty, making Curaçao an intriguing blend of Europe and the Caribbean.

Discover five reasons you should make this unique island your next break.

1. It’s a melting pot of culture Although Curaçao has been ruled at one stage or another by the Spanish, British and French, the Dutch have had the most control of this Caribbean gem over the past 500 years. As a result, there are four regularly spoken languages, Dutch, English, Spanish and Papiamento — a Creole language which incorporates Dutch, Spanish, English, Portuguese and French as well as some Arawak Indian and African influences.

You’ll hear and see the word “dushi” a lot here, and if someone calls you this you can feel good about yourself. The word generally means sweet, but calling someone dushi means “sweetheart”, “babe” or even “sexy”. Are you in Holland or the Caribbean? In the historic center of the town, which was declared a UNESCO World Heritage Site in 1992, the architecture is unmistakably Dutch. One of the island’s most beautiful and recognizable sites is Handelskade; a row of colonial Dutch buildings lining the waters of St. Anna Bay and painted blue, pink, yellow, green and orange.

According to legend, the colorful buildings resulted from an order given by the island’s governor-general in 1917. He supposedly asked for the then-whitewashed buildings to be painted because the sun’s reflection on them gave him migraines.

The capital Willemstad is divided into Punda and Otrobanda on opposite sides of St. Anna Bay. The floating pedestrian bridge, the “Queen Emma”, connects the two areas and swings open to let ships into the harbor, which is a fascinating sight to catch.

3. You can eat adventurously For local cuisine in a casual environment, head to Plasa Bieu in downtown Willemstad, a cosy food court where you can enjoy traditional dishes such as fried fish with tomatoes and cornmeal for around 18 ANG (10 USD).

The island also has plenty of Dutch-influenced dishes such as keshi yena, a local specialty of stuffed cheese with chicken and prunes; and bitterballen, a deep-fried meat snack served with mustard.

If you want to really eat as the locals do, treat yourself to a bowl of iguana soup at Jaanchie’s, a famous restaurant at Westpunt on the westernmost point of the island. A very bony meat, iguana (which can be found all over the island) tastes like chicken and pork. It’s also a rumored aphrodisiac. Don’t think about it. Just try it! With almost 40 beaches to choose from, you’re spoilt for choice. Curaçao is blessed with abundant marine life and beautiful coral reefs and its calm, crystal-clear waters make it ideal for snorkelling and diving.

Some of the best beaches can be found in the northwest of the island, such as Cas Abao and Knip Beach, which boast heavenly water and gorgeous white sand. Cas Abao is a full-service beach (entrance is 10 ANG or 5.70 USD per car) offering food, Wi-Fi, toilets and changing rooms.

If it’s music, bars and restaurants you’re after, head to Mambo Beach or Jan Thiel Beach closer to the center for a livelier atmosphere. Curaçao’s prettiness masks a grim past. The island was one of the most important slave markets in the New World and a vital trade route. But it doesn’t shy away from its not-so-pretty past, and you can learn more about it at the Kura Hulanda Museum in Otrobanda, Willemstad for 17.80 ANG (10 USD).

Built on the site of a former slave yard, the museum exhibits the predominant cultures of Curaçao. This includes the slave trade: from the slaves’ capture in Africa, their journey through the Middle Passage and relocation in the New World.

Curaçao is regularly touted as the Caribbean’s best-kept secret. It’s one of those places not many people know much about. But it’s a place where old meets new, where European charm blends with a cool Caribbean vibe and where you’ll find the same idyllic beaches but with less crowds. If you’re after a destination with a difference, add Curaçao to your bucket-list. 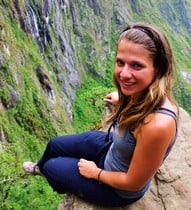 Explore Curacao
Good things are meant to be shared!