Where the medieval and the modern meet: Sensoji temple and Tokyo Sky Tree~ great photos and food!

Asakusa in Taito ward, Tokyo, is a place where the Edo period culture is still very much alive. Its center is Sensoji temple. And since the opening of Tokyo Sky Tree in May 2012 this place receives much attention for the harmony of nostalgic old culture with advanced modern civilization. Now let’s walk casually around Asakusa and explore the brilliant Sensoji temple and Sky Tree. I will introduce some great spots for taking photos as well as local delicacies!

We start at Omotesando road, followed by Kaminarimon, Nakamise and Sensoji. First let’s experience the atmosphere of Edo 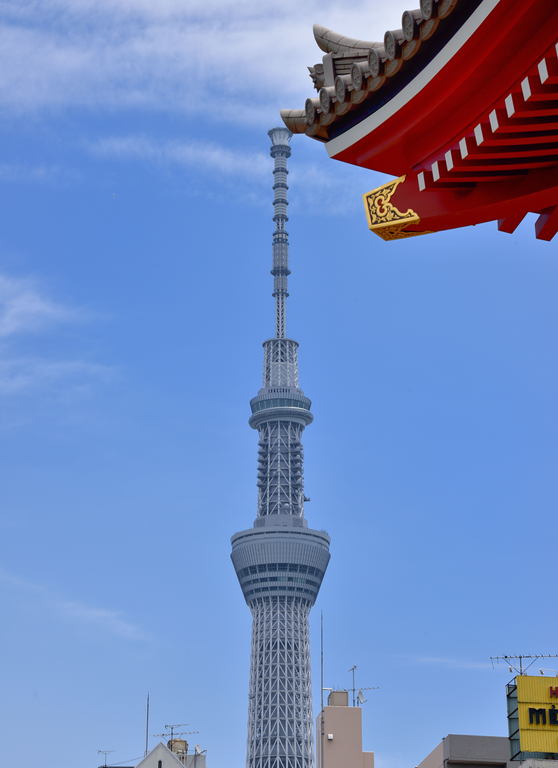 Sensoji temple’s official name is “Kinryuzan Sensoji” and it is the oldest temple in Tokyo. Originally built by the Tendai Buddhist sect, after the war the Kannon deity was enshrined in the temple as the principal object of worship and the place became the head of the Kannon sect. Its alternative name “Asakusa’s Kannon” comes from the enshrined deity. The temple is easily accessible within 5 minutes from Ginza subway line’s last stop Asakusa station. Now let’s start walking.

After passing the starting point of Kaminarimon gate, you will see the souvenir shopping street Nakamise continuing for about 150 meters. This is a familiar view as it often gets filmed by TV crews. The place I want to introduce is after you walk to the end of Nakamise street and pass through the main gate Hozomon. Look back and to your right. If you fix the camera angle a little bit, you will be able to take a unique photo in which Sky Tree looks as if it’s hanging down from the temple’s roof.

The illumination of the main hall is a beautiful collaboration of time and space which brings the cultural assets of the old centuries to the present! Now let’s visit the main hall after sunset. Around the main hall are the five-storey pagoda, which has been rebuilt many times, and Yakushido hall which has remained almost intact since its construction. The main hall, however, was completely burned down in the 1945 Tokyo air raid. The original building erected by Tokugawa Iemitsu 300 years ago unfortunately disappeared, but was rebuilt anew in 1958.

Now its roof uses light titanium and the traditional old style is being reinforced by modern architecture. If you stand right after Hozomon, where you took the previous photo, the panorama of the main hall will be well visible even if you don’t use special wide-angle lens. The pagoda on the left is illuminated too, and you can take a photo of it from the same place. What is the best place to see a high tower like Tokyo Sky Tree from? Do you know? If you look up from too close, the size difference between the high and low parts will be extreme and the whole tower will look tilted. From too far the view will be obstructed by other buildings. Have you experienced all of this? The best place to see such a high tower is from a distance about 3 times the size of the tower.

Tokyo Sky Tree is 634 meter tall, so the best place to see its slender body is from about 2 kilometers away. Where would that be? Well, that is Asakusa View Hotel. From the restaurants and bars on the 26th and 27th floors of that hotel Sky Tree can be seen beautifully. Of course the splendid view is visible not only from the restaurants, but also from the guest rooms facing to the east.

Asakusa View Hotel is a friend facility of Tokyo Sky Tree where the view to the tower is considered one of the best. The hotel therefore offers some attractive accommodation packages which include a specified-day ticket voucher to Tokyo Sky Tree’s observation decks. If you use the voucher you can enter the tower’s decks easier than if you go through the counters first. How about dining at Musashi Sky Grill Buffet on the 26th floor of Asakusa View Hotel? There is a big variety of Japanese, Western and Chinese delicacies, some of which are cooked in front of you and you can eat fresh. From the paid premium seats near the window you can enjoy the night view of Tokyo Sky Tree and Sensoji temple while drinking wine and eating your dinner. As shown on the photo, you can try a bit of everything. It’s a highly recommended place for special occasions. Of course, you can take as many photos as you want from the window seat without bothering or being bothered by anyone.

An evening view of a modern city emerges in the old traditional district. Enjoy Asakusa whose night view is similar to that of Kuala Lumpur Finally, you would want to take a photo of the gorgeous Tokyo Sky Tree rising amidst the modern city, between the highways and skyscrapers, as seen from Azumabashi bridge. That bridge spans over Sumida river so it’s very close to Asakusa. The view from its western side (near Asakusa station) is splendid. I recommend it because from here you can see the rising Tokyo Sky Tree between the highway road and the tall buildings in what is actually a traditional old district. This entire man-made scenic landscape reminds me of another big Asian city – Kuala Lumpur. Maybe that’s because Tokyo Sky Tree looks like the tower in Kuala Lumpur. You can feel as if you’re travelling abroad even though you’re in Tokyo.

Here you can use the tripod, adjust the aperture and add the road, the buildings and Tokyo Sky Tree to the depth of the field, then set a lower sensitivity and take photos with a longer shutter speed. You will capture a gorgeous view of Sky Tree between the highway road and the tall buildings, as well as the reflection of the illuminations on the river surface. Definitely try it.

Asakusa is easily accessible and has plenty of great spots from space and time perspectives. Here I introduced some places related to Tokyo Sky Tree, but there are many others where the medieval traditional aesthetics collaborates with the man-made modern landscape. And in the winter the illuminations are beautiful. I hope this article will help you to enjoy the night life in Tokyo in winter. 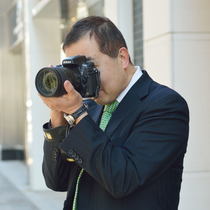