Armenia is a beautiful historical country located in the south Caucasian region of Eurasia. Since the ancient period, Armenia was ruled by different empires during different eras from the Orontid dynasty to Byzantine, Sasanian, and Seljuk Empire. However, by the 19th century, the First Republic of Armenia was established. It is a small country, yet it is rich in history and religion. Christianity prevails in the country as a strong religion. Also, it is locally known as Hayastan. Yerevan is the capital and the largest city of Armenia, and Armenian is the official language.

Armenia is surrounded by pristine nature and ancient monasteries that attract tourists from all around the world. The monasteries are built with unique architecture and they signify the history and spiritual meanings. As a result, this is the very reason for Armenia to be widely known in the world. So, let’s check some of the must-visit monasteries in Armenia. Located on a gorge of Kasagh River at Ohanavan village of Aragatsotn in Armenia, Hovhannavank is a medieval monastery. The monastery has St. Karapet Cathedral as its main component, which was built during Vachutian Dynasty. It consists of a narthex towards its western entrance, a cruciform on the floor of the Cathedral with carved walls of scenes from the parable of the wise and foolish virgins, and an umbrella-shaped roof with two floors. It is known as the center of education, and the study of God and religion of Eastern Armenia. Source: Photo by user Tamara Areshian used under CC BY 2.0

Tegher monastery is located on the southeastern slopes of Mount Aragats in Tegher in the 13th century. It was built for Princess Khatun during the reign of the Vachutian Dynasty. The monastery consists of a Surb Astvatsatsin Church and gavit. The church is made up of basalt with a cruciform design. There is a chamber in each of the four corners and a semicircular apse at the end of the hall. It has a gable roof and a drum with a cone-shaped dome. The gavit is supported by four huge columns and arches. Located in the village of Mekenis of Gegharkunik Province, Armenia, Makenyats Vank is a monastery featuring Armenian architecture. It was founded in the 8th century. It consists of Surb Astvatsatsin Church built by Prince Grigor Supna II. It was known as the center of culture and education. The church follows a cruciform plan with a conical dome of four windows. Makenyats Vank is surrounded by khachkars, gravestones and a continuous wall.

1 BD Studio in Downtown by a 5★ SuperHost! Aghjots Vank is a monastery located along the stream flowing into the Azat River of Ararat Province in Armenia. Built in the 13th century, it was founded by Saint Grigor Lusavorich of the Armenian Apostolic Church. Following the Armenian architectural design, Aghjots Vank consists of St. Stephen Church, St. Paul and Peter Church, and a gavit. St. Stephen Church is the main church following a cruciform plan with four entrances and Surb Poghos Petros church. Displaying three-dimensional carvings of Saint Peter on the left and Saint Paul on the right, St. Paul and Peter Church was completed in 1270. Located in the Artsvanist village of Gegharkunik Province, the Vanevan Monastery stands alone with St. Grigor Church as its main church. The church was first built by Prince Shapuh Bagratuni and Princess Mariam during the reign of the Bagratuni Dynasty, and the renovation was completed in the 10th century by King Gagik I of the Bagratid Dynasty. Vanevan Monastery features Armenian architecture with a cruciform church and four semicircular apses. The main church consists of an octagonal drum that is designed with moulded band. This drum is known to be the only one left after the collapse of other drums of the monastery. Khor Virap is one of the best Armenian monasteries with a scenic view of Mount Ararat, Armenia. Its best location attracts tourists from all over the world. For about 14 years, it served as a prison to Saint Gregory by King Tiridates III. The monastery consists of the Church of the Holy Mother of God, St. Gevorg Chapel and pits. The church has a 12-sided drum with a dome. The pit of Saint Gregory is located underneath the southwest of the chapel. Haghpat monastery, also known as Haghpatavank, is located in the Lori Marz region of Armenia. It was founded in 976 AD by Queen Khosrovanush during the reign of Ashot III the Merciful, King of Armenia, and remained as an important religious and cultural center. Due to its importance, it is now a part of UNESCO World Heritage. It is known for its religious Armenian architecture which blends the elements of a Byzantine church and simple architecture of the Caucasian region. The walls are built with arched openings, several cross-stones or khachkars, and no paintings on the walls inside the church except for a painting of Christ Pantocrator in its apse. Sanahin monastery is a part of the UNESCO World Heritage with its unique Armenian architectural design and ancient history. It has similarities with the Haghpat Monastery of blending the elements of traditional vernacular Caucasian architecture and Byzantine ecclesiastical architecture. It is located on a hill facing the Haghpat Monastery across the Debed River. It consists of St. Gregory Church, Astvatsatsin Church and Amenaprkich Church. It has a narthex at its entrance, a library, numerous cross-stones, a belfry and arched pillars in the hallways. Havuts Tar is a uniquely structured wall monastery located on a highland along the Azat River in Kotayk Province. The wall was built of hewn stones that surround the monastery. Havuts Tar has an arched entrance at the southeast corner connecting to the main trail of the monastery. It also consists of chambers and a huge underground chamber that served as a library of the manuscript. It has two churches within its border, yet only one is intact, and ruins of gavit. Source: Photo by user Alexander Naumov used under CC BY 3.0

A design of Armenian architecture, Hayravank Monastery is located on a hill along the shores of Lake Sevan of Gegharkunik Province, Armenia. It consists of a church that was built in the ninth century. The center of the church is designed with a quatrefoil cruciform and apses. It also consists of a gavit as narthex with an inscription on its tympanum. The monastery is surrounded by khachkars and gravestones. It is located in one of the historical sites of Armenia, depicting radians of the Bronze Age and Iron Age.

Visit Armenia and admire its beauty

With stunning nature and ancient historical Armenian architectural designed monasteries, Armenia has become one of the best destinations in the world. Its beauty of nature and history attracts people from all over the world. So, if you are planning to visit Armenia, you must visit the beautiful monasteries and learn about the history. 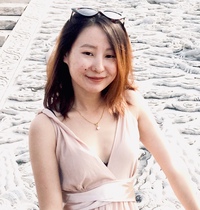 I'm from Bhutan, and I have always wanted to travel around the world. So, ever since I started travelling, I have never stopped. Travelling made me a whole new person and changed my perspectives of...Read more
Want to contribute as a Local Expert?
Register Here
Hotels
Lowest Price Guarantee

Explore Yerevan
Good things are meant to be shared!