Edinburgh has plenty going on, such as the decades-old castles, the famed National Gallery, and the all-time kid-friendly zoo. As such, not many visitors take day-trips out to the suburban areas and instead choose to stay within Edinburgh for their entire vacation.

However, if you’re heading to Edinburgh, take a few days to venture outside the city boundary and you won’t be disappointed! The rest of the country has more to offer than you probably can cover within your stay in Scotland. For those who would like to do some suburban exploration without needing to stay the night, here are some great day trips to enjoy from your Edinburgh base: Loch Ness is a large, deep, freshwater lake in the Scottish Highlands.

A must-see when travelling out of Edinburgh, this attraction is famous throughout the world for the mythical creature that supposedly resides here: the Loch Ness Monster, or, if you’re on more familiar terms, Nessie! There are two Loch Ness Monster visitor centres for those who are interested to know more about the aquatic animal, and there is also a castle that lies on the banks of the loch (lake) for the avid photographer who wants great shots of the lake!

The second largest loch by surface area and largest by volume, Loch Ness holds more water than all the lakes and rivers in England and Wales combined. The lonely island on the loch, Cherry Island, makes for a great day of exploring.

Perfect for a hike, stroll, or even just to take in some fresh mountain air, Loch Ness and its surroundings is a sight to behold (even if you don’t get to spot its famous creature!). 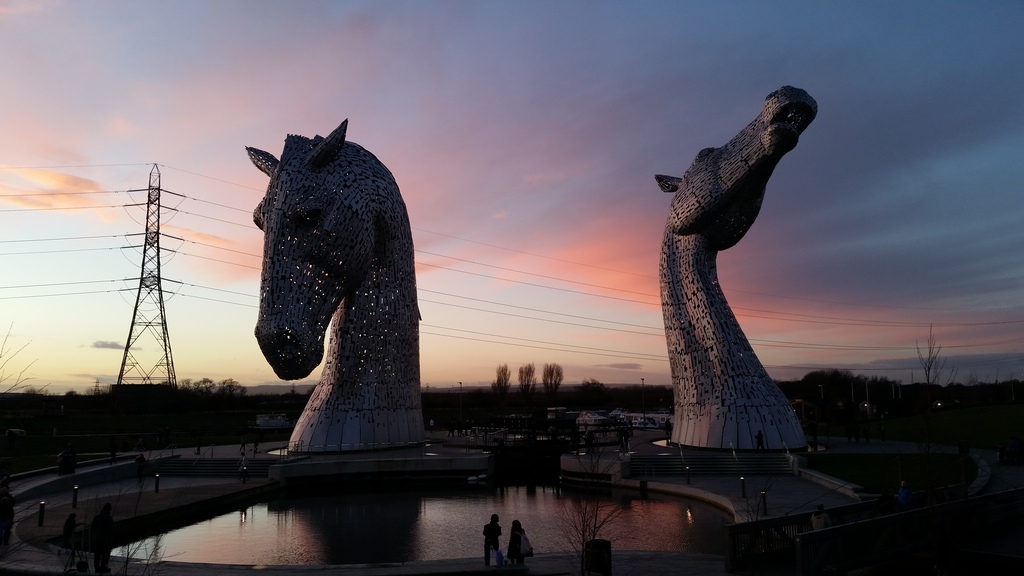 Source: Photo by user Michel Curi used under CC BY 2.0

Kelpie, or water kelpie, is a Scottish term given to a shape-shifting water spirit that inhabits the lakes and pools of Scotland. While it has usually been described as appearing in the form of a horse, this mystical creature does sometimes adopt human form, or at least the Scottish believe.

Almost every sizeable body of water in Scotland has an associated Kelpie story, the most famous being the Loch Ness Monster (discussed above).

In Falkirk you can see a huge monument dedicated to these mythical beasts, The Kelpies is a 30-metre-high (98-foot-high) horse-head sculpture standing next to the Forth and Clyde Canal. Visit this monument just to snap photos of it and marvel at its sheer size as well as the cultural significance of horses in Scottish heritage! Fun fact: Each night, one hour after sunset, the Kelpies glow brightly thanks to LED lights inside.

Innovative Architecture: Including the Kelpies, Falkirk Wheel, and Forth Bridge

Super King room in the heart of town

Explore the magnificent ruins of Linlithgow Palace, the birthplace of Mary Queen of Scots. Built and modified over two centuries by the Stewart Kings, the result is a superb Renaissance residence fit for royalty.

Constructed to act as a resting place for royals when they travelled from Edinburgh Castle to Stirling Castle, it boasts high towers that give spectacular views of lush greenery and lakes filled with wildfowl.

Visitors to the palace are invited to gain unique insights on the domestic life of the Scottish royalty and see the ornate fountain in action. Additionally, walk within the architecture of the King and Queen’s bedchambers and admire the oriel windows.

Have a picnic by the loch (lake) and take some time to spot some local wildlife, because this palace is the place to chill. A rotating boat lift in Scotland that connects the Forth and Clyde Canal with the Union Canal and that started operations in 2002, the Falkirk Wheel is a feat of modern engineering that helps to overcome landscape differences.

Visitors can enjoy the “Falkirk Wheel Experience” using the specialised boats on the site and view the distinctive visitor centre that shows the wheel in action. A medieval stronghold near the village of Doune, this attraction not only has the heritage but has also been used to film television series and films, such as Game of Thrones, Outlander, and the British comedy, Monty Python and the Holy Grail.

Situated 8 miles (12.9 kilometres) north-west of Stirling, the castle was built during the 13th century, explaining its strategic location and possible reasons for its damaged interior. It was rebuilt to its present form in the late 14th century and has been under the Scottish government’s protection as a heritage site ever since.

Naturally defended on three sides by steeply-sloping ground, the castle forms an irregular pentagon shape and has an enclosed courtyard. It is one of the few standing medieval labyrinth of rooms and passages bound together by spiral staircases, and its structure is one of the reasons for its popular appearance in many movies and television series that require a similar backdrop.

4. Admire Rosslyn Chapel, as featured in the Da Vinci Code (from USD 48.0)

Founded in 1446, the stunning Rosslyn Chapel attracts visitors from far and wide to see its unique and lavish interior. Its ornate stonework still remains inspiring and intriguing to artists and visitors today.

Almost every single surface of the 15th-century chapel boasts intricate carved stonework, with many Biblical stories depicted in detail. From its exterior, Rosslyn Chapel does not look anything special, as its size stands similar to a regular country church.

Architectural fanatics would know that its gothic pinnacles, flying buttresses, and points arches are something worth taking time to wow about and be amazed at. For the less structure-concerned visitors, you may be shocked to find out that the Da Vinci Code was filmed in this very church with its climactic scene played right here.

Be impressed by the fascinating architecture inside, its detailed carved stones, and even by the fact that the famous movie was played out in this very church.

5. Wander around Hawick, the home of cashmere

A frequent winner of national floral awards and internationally renowned for its fine quality knitwear, cashmere and merino wool, Hawick is the largest of the Border towns and has a long and colourful history. The city is becoming increasingly more popular with tourists.

Within Hawick, the famous Wilton Lodge Park is one of the most popular attractions. Comprising more than 107 acres (43.3 hectares) of the River Teviot’s wooded banks, it offers excellent tree-lined riverside walks, picnic destinations, and other recreational facilities.

As you walk around, take note of the James Thomson footbridge over the River Teviot. It was recently constructed in 2006 to honour the famous poet, James Thomson. Interestingly, it provides a stark contrast between the older buildings in the background and its new-age architectural style.

Additionally, visitors to this area can check out the textile production at Peter Scott for great cashmere goods at reasonable prices.

Did you know that every salmon hatching results in 5,000 eggs, but very few survive? Learn about the life cycle of the “King of Fish” from the Salmon Wall display in the Salmon Viewing Centre that opened in 2005.

The centre is a unique visitor attraction and a perfect place to educate kids on the underwater world of the salmon fish. Children can be entertained with the interactive displays, which are both educational and fun to partake in!

Philiphaugh is a village by the Yarrow Water, situated on the outskirts of Selkirk, and is one of the best places in the world to view salmon leaping up the cauld to get to the top of the river and reproduce. The best time to see salmon leaping is between August and November, so do take note!

Get your belly filled at the Waterwheel restaurant that is open daily from 10 am to 4 pm. They offer full meals, snacks, and refreshments in case you just need a drink and some food to keep that tummy from rumbling. 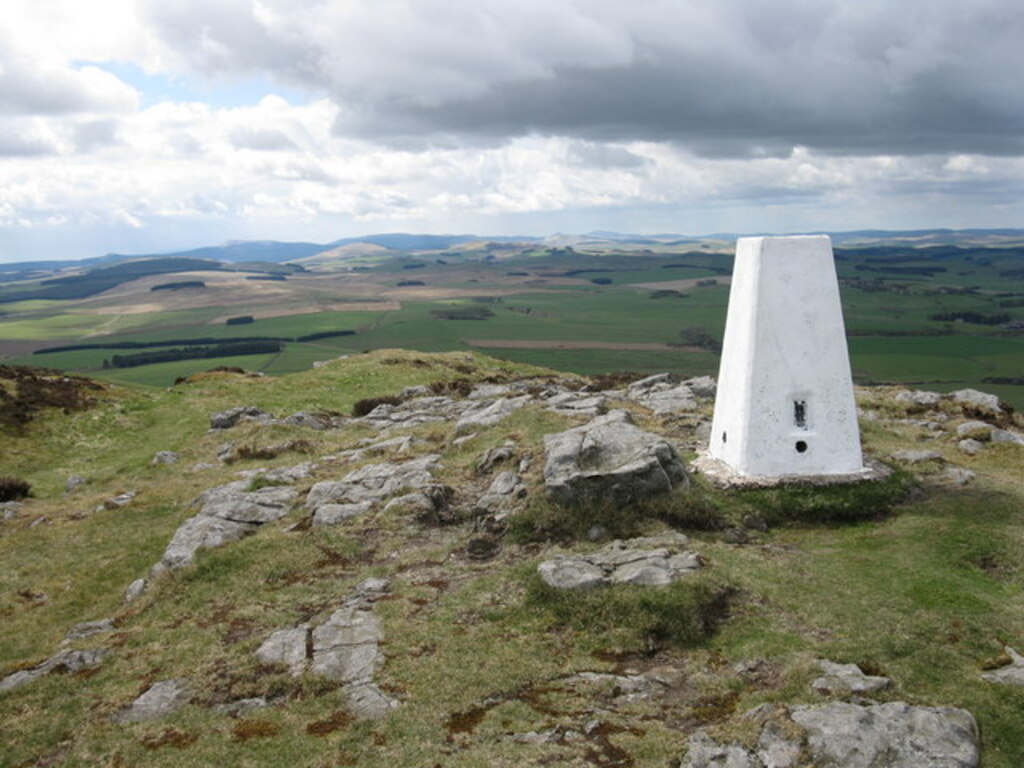 Interested in an adventure? Time to take those hiking boots and jackets out of the closet!

Hike up 424 metres (1,391 feet) to Ruberslaw, where stunning views across the area await you! Stand on Ruberslaw’s rugged summit and hopefully you can spot Hadrian’s wall about 50 miles (80.5 kilometres) to the south.

Most of Ruberslaw is agricultural land and made of red sandstone. Once an Iron Age hill fort, this mountain was converted into a Roman signal station during Hadrian’s times. The addition of a Roman fort to enhance the lookout was added slightly after the signal station.

There are plenty of activities catering to varied interests. Biking, climbing, and horse riding are just some of the things you can try when visiting the Ruberslaw Mountains. If you visit during the summer period, try out one of the oldest common ridings in Scotland for a true Scottish experience.

Where are you heading to?

So there you have it! 5 must-visit day trips out from cultural Edinburgh.

The best part is there is something for everyone to do, whether its castle-viewing, shopping, learning about myths and legends, or even just relaxing alongside a lake. Scotland continues to impress and renew its popularity amongst tourists who just need some time away from the bustling environment!

Go forth, explore, and make memories!