The 9 Most Haunted Places In Michigan

This Midwestern US state borders four of the famous Great Lakes and also offers thousands of inland lakes. Michigan is an ideal state for a great vacation with plenty to see and do. Detroit is home to the auto industry of the USA, while Detroit Institute of Arts exhibits murals by artist Diego Rivera. Hitsville USA is also in Detroit, which was the original headquarters for Motown Records. Other attractions include Pictured Rocks National Lakeshore on Lake Superior and Sleeping Bear Dunes National Lakeshore with its ocean bluffs and lakes. The state is also one of the best areas of the US to visit some eerie destinations, as can be seen from some of the most haunted places in Michigan, USA. Scroll below if you dare! The River Raisin Battlefield is located in Monroe, Monroe County, Michigan. The river was named by French-Canadian settlers due to the wild grapes along the banks. The battles held here occurred in 1812 when the militia was called to build a military road to link Detroit to Ohio. In July that year, General William Hull invaded the area with the goal of capturing Fort Malden but was defeated by the British and their Indian allies. This is the site of one of the largest, bloodiest battles in the state, where over 500 American soldiers were killed. Their remains are still being discovered, with the last found in 2000. Some claim to have photographed ghostly figures and others have heard cries of agony on the field. 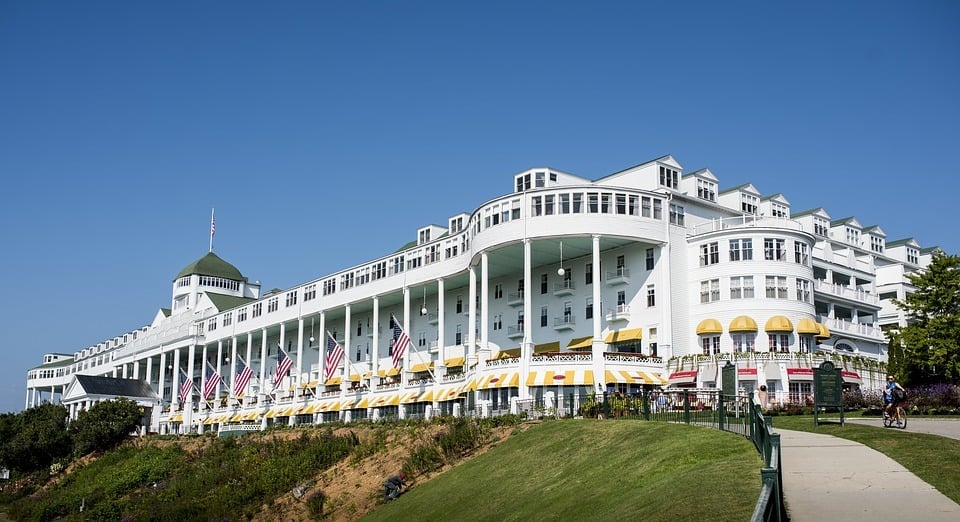 Mackinac Island on Lake Huron is known for its beautiful, unspoiled nature. This quaint town is where visitors can explore the historic Fort Mackinac and experience the famous Mackinac Island Fudge. However, those looking for a haunting experience will enjoy the Haunted History Tours conducted on the island. The tours take place downtown, where you will be regaled with the history, ghost stories, and legends of the island - a huge Native American burial ground. One of the hot spots is Grand Hotel, where legend tells of human remains uncovered in the building’s foundations. A maintenance man once reported a “black mass with glowing red eyes” rushing at him. A man wearing a top hat was seen playing the hotel’s piano, while a woman dressed in Victorian clothing was spotted roaming the halls. Another spot from the 1700s and the 1800s is the Drowning Pool, where seven women were accused of witchcraft and drowned. Visitors report seeing mysterious splashing in the pool and dark figures moving just under the surface. Felt Mansion was completed in 1928 and was a summer home for Dorr. E. Felt and his family. However, his wife, Agnes, died not long after the house was completed. It is believed that Agnes haunts the mansion, particularly the couple’s bedroom. The property was sold in 1949 to St. Augustine Seminary for Boys. In the 1960s, nuns took over the mansion, and in the 1970s it was used as a State Police post. Dunes Correctional Facility was also built on these grounds. Besides poor Agnes, a number of ghosts have reportedly been seen on the property, and in 2001, West Michigan Ghost Hunters Society started ghost tours. The money they earned from the tours went towards renovating the property and bringing it back to its former splendor.

Peaceful & Heated Yurt in the Forest

Enchanting & Heated Yurt in the Forest This striking, soaring building is thought to be one of the top 10 haunted places in the state. The building dates back to 1912 and has more than a thousand rooms, plenty of secret stairways, passageways, and hidden floor compartments. It is also said to house a number of ghosts! The temple was built by George D. Mason, who went bankrupt while building it. This caused his wife to leave him, after which he went up onto the roof and jumped to his death. Security guards have since reported seeing Mason’s ghost heading up the staircase to the rooftop, while visitors have heard strange noises, like windows and doors slamming shut. They have also reported mysterious shadows moving, the feeling of being watched, and experiencing cold spots. This building was constructed in 1885 and was known as the Northern Michigan Asylum. Run by Dr. James Decker Munson, the asylum housed up to 3,000 patients across several buildings. His method of treatment was that beauty can be used as a form of therapy. He believed that if patients were surrounded by tranquillity, their problems would go away. There have been several unusual occurrences at the hospital, including the legend of the Hippy Tree, which was believed to be a portal to Hell. One person claimed that as you approached the tree, you could feel people watching you who didn’t want you there. People were warned not to approach the tree and that evil lives there. Other rumors speak of bodiless voices and unexplained lights in the building, as well as a priest who was driven to suicide by dark forces in the hospital. Doherty Hotel opened in the 1920s and was notorious for being a speakeasy during the Prohibition and the perfect place for mobsters to hang out. This included the notorious Purple Gang, so many gangland murders occurred here. One featured an oil promoter, Jack Livingston, who shot and killed his cousin, Isaiah Leebove at the bar. These days it is believed that Isaiah, along with the Doherty matriarch, Helen Doherty, both haunt the hotel. It is still open and ready to take guests if you are willing! Among the haunted hotels that still welcome guests is Landmark Inn in Marquette. The hotel was built in 1930 and was originally the Hotel Northland. A unique and beautiful hotel, it was popular with the rich and famous for several decades, including Amelia Earhart, George C. Scott, Jimmy Stewart, and Abbott and Costello. However, this also includes a number of people who never checked out of the hotel. One story features a man who murdered his girlfriend at the hotel when she admitted that she was cheating on him. The hotel was still under construction and he hid her body in the basement. Workmen who came back to finish the building reported strange sounds coming from the basement - a whispering and weeping female voice. Another story involves a ship worker who stayed here and fell in love with a local librarian. They used to meet on the sixth floor of the hotel, but after they made plans to marry, he died on a shipwreck. The woman returned to their room to grieve and apparently died from a broken heart. Her apparition can be seen to this day, pacing the floor and weeping. This prison was the first permanent structure built in Jackson in 1842. It moved to a new building in 1926 and housed 6,000 inmates - once known as the largest walled prison in the world. On a tour of the prison, your guide will regale you with enough tales of cruel punishment, bungled escapes, torture, sickness, and wrongful deaths to make you glad you weren’t one of the inmates back then. Visitors have apparently seen ghosts and heard phantom screams and unearthly moans. Others heard doors slamming and banging on pipes. Paranormal investigators have reportedly managed to record voices screaming and pleading for help. In 1894, the Whitney was the home of David Whitney, a lumber baron and once the richest man in the city. Some years later, the building became a tuberculosis ward where many patients died and are said to haunt the mansion, including Whitney himself who also died here. The Romanesque revival mansion is now a restaurant that retains all its original charms while serving delicious cuisine. However, the building is more than a place for fine dining - every first and fourth Sunday of each month, the restaurant’s owners “pull back the curtain” on this enigmatic place and invite paranormal hosts to guide you through its legends and its history, including a champagne tour, a five-course dinner, and an expedition through the mansion, its gardens, and the carriage house.

Every day is Halloween in Michigan, USA

This fascinating and beautiful state has a lot to offer its visitors, including many lakes, great cities, and historic sites. However, it is also home to scary paranormal stories and locations that you can learn about by visiting some of these most haunted places in Michigan, USA.

Explore Michigan
Looking for accommodation?
Good things are meant to be shared!