Many people are familiar with the fact that the city of Kolkata is the cultural hub of India. However, when you get to know this city more intimately, you will know about the city’s haunted secrets. The city houses several old buildings and people believe that some of these houses have spirits and ghosts in them. Kolkata is also regarded as the center of black magic and tantra. All these definitely sound interesting and at the same time a bit eerie. Some of you must be great admirers of horror films and get turned on when you get to see one. If you are one of the horror movie buffs who love the feel of spookiness, you should certainly visit these haunted places in Kolkata, India. Source: Photo by user Ankur P used under CC BY 2.0

Built-in the year 1767, South Park Street Cemetery is one of Kolkata’s oldest graveyards. The cemetery has a unique beauty of its own featuring tall vegetation, ancient graves, and a feeling of serenity. These ancient graves mostly belong to the British soldiers. The cemetery is considered to be one of the city’s most haunted places. There have been several spooky incidents reported such appearances of hazy shadows on its walls, as well as, strange sounds. All these occurrences have accentuated the feeling of the presence of spirits around. Writer’s Building used to be the office of junior staff and clerks when the British ruled over India. It has also been the State Government secretariat. The building has several vacant and big rooms that are not utilized and are extremely eerie. Night shifts are refused by the workers for the fear of ghosts. Also, food vendors and night guards on the nearby pavement have heard screams from the building at late nights quite often. 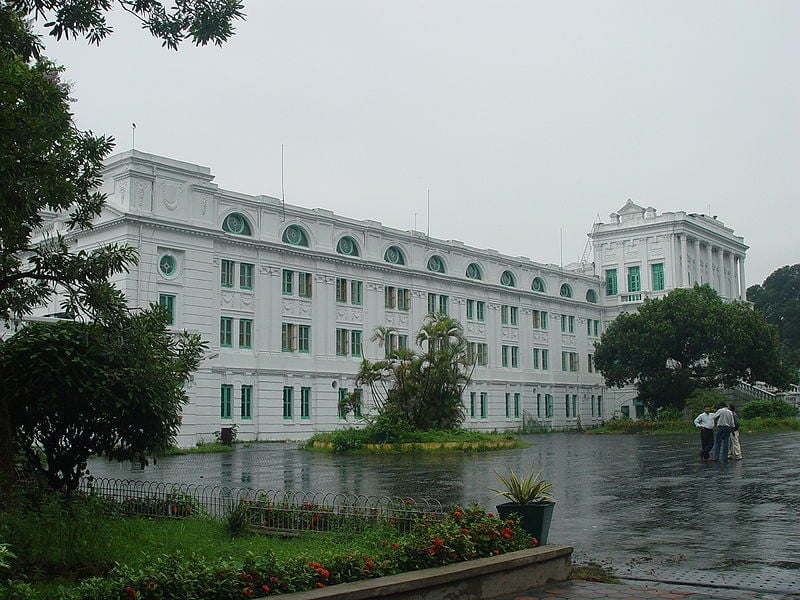 National Library used to be the official home of the Governor-General of India under the British rule. Today it is one of the most famous attractions in the city and houses an impressive collection of important and scarce publications and books. However, there have been many ghostly stories that have been knitted around this iconic building. It is believed that Lady Metcalfe, the wife of the Governor was a cleanliness freak and loved books. Many students who study in the library till late in the night and night guards have heard unnatural footsteps of the spirit of Lady Metcalfe, as well as, hazy shadows on the library’s walls.

Hastings House is considered to be another major haunting place in the city. If you are not faint-hearted, a visit to this building should be definitely on your cards. According to rumors. uncanny footsteps of someone can be heard, which people believe belongs to the ghost of Warren Hastings who visits the place to look for his folder. The folder is supposed to have had some important documents, which could have rescued him from his impeachment procedure in London. Some have even reported that they saw a horse rider visiting the place. One of the city’s bustling metro stations, Rabindra Sarobar Metro Station also happens to be the spot where many people have committed suicides. It is said that the souls of all those people can be seen on the platform of this metro station at late hours. Many passengers have seen strange shadows on the pillars of the platform or strange people crossing the tracks. The station is considered to be scary and is among the city’s most haunted sites.

6. Under the Howrah Bridge The banks of River Ganges are major haunted places in the city. These places are witness to innumerable deaths due to drowning accidents or suicides. It is believed that the unsatisfied and sad souls of all the victims of these suicides and accidental cases haunt the locality. They can be seen walking around in grey shadows. Many people who visit Zanana Ghat and Millick Ghat in the morning have seen unnatural cases of hands coming out of the river water seeking help.

House of dolls or Putulbari is a hundred-year-old haunted house in the City of Joy, which is almost in ruins. Located in proximity to the Sovabazar jetty, this ancient house is also close to the haunted Nimtala Shamshaan Ghat. The house still has some inhabitants but no one visits the building’s upper stories. In case you are in pursuit of some eerie adventure in this city, you should try to visit Putulbari. The affluent owners or Babus who resided in this house previously brought young women here and exploited them sexually and even took their lives to hide their crime. It is believed that the undeparted spirits of those victims haunt the house seeking justice. Source: Photo by user Avik Banerjee used under CC BY 3.0

The late Nawab Wajid Ali Shah, who was the ruler of Awadh used to own the Kolkata Dockyard. He was thrown out of power by the British so that they could rule the then princely state. The Nawab was furious but reportedly passed away after suffering a heart attack. There are many eyewitnesses who claim to have seen the ghost of the Nawab moving around in the dockyard’s bylanes. It is believed by many that his ghost can be seen haunting the Kolkata Dockyard. It is believed that he still seeks vengeance and wants to avenge his unfair dethronement. George William was passionate about race and he was obsessed with winning a bet on a snow-white horse named Pride. Pride was a champion horse but became weak and old with the passing years. One day, out of the blue, Pride was found dead after losing a derby the previous day. People suspected that the horse was killed brutally. Spooky events began thereafter with many passers-by claiming to have seen a snow-white horse running on the race tracks on a Saturday night.

One of Kolkata’s most ancient burning ghats, Nimtala Shamshaaan Ghat also features on the list of the city’s most haunted places. People believe that the “aghoris” or sadhus visit the ghat for carrying our different rituals during Kali Puja to invoke the goddess known as the Shamshaan Kali. The locals say that the names of these “aghoris” should not be pronounced loudly. Apparently, these people feed on the burnt bodies’ leftover flesh and use this rite to gain supernatural powers.

Kolkata is known for countless mysteries and dark secrets on its various streets and walls. While there is a string of haunted places in this city, we have compiled a list of the top haunted corners in Kolkata, India, for your convenience. Pala Sen is an avid follower of travel and health updates, current affairs and entertainment news from all across the world and writing is a passion for her. She had been previously associated...Read more
Have a question? Ask fellow travellers and travel experts here.
Want to contribute as a Local Expert?
Register Here
Hotels
Lowest Price Guarantee

Explore Kolkata
Good things are meant to be shared!