Mount Athos is one of the magical and most beautiful places on earth that will make you feel like living a fantasy rather than what we know as reality. Towering monasteries and fortresses surround the slopes of the mountain. Some caves need exploration here. Churches around the place house rare pieces of icons, that according to locals, perform miracles. The oceans that surround Mount Athos might be the loveliest thing you’ll see in the Aegean. It’s truly an ideal place to find yourself in if ever you are soul-searching or in need of enriching your spirituality. The only downside is women are not allowed to enter the mountains. Lucky for men, this destination is the place where you can think and strengthen your faith. While here, make sure to check out our list of amazing monasteries to visit in Mount Athos, Greece. Built in the late 10th century by three monks and disciples of St. Athanasios Athonite, Vatopedi Monastery is one of the 20 monasteries on Mount Athos that travelers from different places go to whenever in Greece. It’s a big and expansive monumental compound housing almost 100 monks, portable icons, manuscripts, and holy relics. With its enclosure of tall walls, the entire place looks like a gated community. The central church is in its big yard, which is the only walled mosaic in Mount Athos. There are a total of 12 chapels in the monastery. Ranked as the fourth in the hierarchy of Athonite religious institutions in Mount Athos, Hilandar Monastery is a significant center of Serbian spiritual and cultural life. It plays a vital role in the survival of Orthodoxy and Serbian national consciousness in the country. Its great walls house some of the greatest artistic treasures found in Mount Athos, including iconic paintings and relics. Hilandar Monastery also boasts a classic library that contains collections of important books and manuscripts. According to most, the monastery is the most beautiful church on Mount Athos. It has its charm and ambiance that will make you feel connected. Take advantage of Mount Athos’s rich culture and indulge in a spiritual trip to one of its promising monasteries, The Holy Monastery of Simonopetra. Established in the 13th century by Saint Simon, this church is on a rock that has a height of 300 meters (984.3 feet) above sea level. Upon visiting the place, you will learn that Simonopetra features three seven-story apartment buildings. Although it suffered from damages by continuous fire incidents in the past, the monastery is still able to get past it. Also, the miracle-working left hand of Saint Mary Magdalene is in the church. Koutloumousion, the sixth place on the list of monasteries in Athos, is only 500 meters (0.5 kilometers) away from the capital of Mount Athos in Karyes. Its establishment was during the reign of Alexius the First Komnenos in the 12th century. Its name is originally from the founder Kallisto Koutloumous, who is an official of Turkey, who later on converted to Christianity and became the first abbot of the monastery. One of the most significant characteristics of this monastery is the foundation of its main church. It stands on the roots of trees and stumps due to the unstable land of the place. Known as one of the smallest monasteries in Mount Athos, Stavronikita is a holy land founded by Patriarch Jeremiah in 1540. Its architecture follows the traditional style, where the Catholicon is in the middle, the Refectory is on the ground floor of the southern wing, and several chapels surround it. The monastery underwent a lot of renovations from the 18th century until the present time. Its library contains a vast number of illuminated manuscripts and liturgical scrolls and the mosaic icon of St. Nicholas. Once you visit, you’ll meet a lot of monks and scholars living here. Placing third on the hierarchy of the monasteries in Mount Athos, Iviron Monastery is one of the holy places you shouldn’t miss. It was established by John the Iberian in 1030, highlighting the presence of the Blessed Virgin Mary. It’s a spacious compound with a large courtyard that houses a chapel with the miraculous icon of Panagia Portaitissa. Its beautiful library is the richest and contains approximately thousands of manuscripts that are all important. Some of the icons found in the monastery include a copy of the Holy Icons Extreme Humility and Mother Of God, Portaitisaa. You can even avail of postcards here. Xenophontos Monastery offers every visitor sweeping views of Mount Athos, especially with it standing by the sea on the western shores of the Athos peninsula. With the help of the funds given by Basil II, St. Xenophon successfully established the monastery at the end of the 10th century. There are two Katholikons in the place, the old one in the year 1000 and the new one in the 18th century. The new one is said to be the largest of its kind in Mount Athos. Some of the many relics inside the monastery are the rare large mosaic icons of St. George and St. Demetrios. Tucked between the monasteries of Gregoriou and St Paul, Dionysiou Monastery is the fifth place on the list of the monasteries of Athos that is on the southwestern part of Athos peninsula. It was established in the 14th century by Osios Dionysios, with the support of Emperor Alexios III Great Komnenos. Its building is on a steep rock found 80 meters (262.5 feet) above sea level and it will remind you of those tower castles you see in Disney movies. In this location, visitors will surely love the breathtaking views of the coast. It houses 14 small churches, with the main church dedicated to the birth of John the Baptist. Known as the only Bulgarian monastery in Mount Athos, Zograf Monastery is one of the biggest monasteries in this Holy Mountain. It was established in the early 10th century by three Bulgarians from Ohrid, named Moses, Aaron, and John. The monastery got its name after the 14th-century icon of Saint George, commonly known as Saint George the Zograf. Monks inhabiting the place are all Bulgarians. Also, there are eight chapels within its precinct and an addition of eight on the outside. Its refectory is on the west wall of the monastery. When it comes to rare manuscripts, Greek and Bulgarian codices, the library is the best place to go. Founded by Euthymios, a disciple of St Athanasios the Athonite, Docheiariou Monastery is primarily at the port of Daphne. However, during the Byzantine times, it was moved to its present location in Mount Athos. There are important relics found in the place, such as the miraculous icon of Theotokos Gorgoepikoos, which you’ll find in a chapel. To find the library, you have to go to the monastery’s tower. There are hundreds of manuscripts and thousands of printed works there. Its Katholikon is the largest amongst the others, with its distinct characteristic focusing on its height. It ranks 10th place on the hierarchy of monasteries in Athos.

Escape to the high mountains of Mount Athos

Whenever you find yourself feeling a little lost in life, one of the best things to do is soul search. Mount Athos is the perfect destination for you. A trip to this holy land will not only help you get back on your feet, but you will also have all the break you need. Surround yourself with the positivity and serene ambiance of the place so that when you’re ready to go back, you’ll be as good as new. 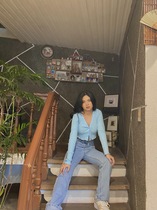 Elah Angelica Casallos is a Psychology student who hopes to see the world one day. Right now, she's currently exploring the world around her through writing. When she's not busy with school works...Read more
Want to contribute as a Local Expert?
Register Here
Hotels
Lowest Price Guarantee