Sail Down The Nile On A Dahabiya Boat

Sailing down the Nile in Egypt has always been on my ‘to do’ list. When I finally got the chance to tick it off that list, it easily lived up to my expectations. Egypt is struggling for tourists right now and I was happy to work with Djed Egypt Travel and get on board one of their beautiful Dahabiya Boats to sail up the Nile from Esna to Aswan. These graceful boats are built by local craftsmen in Esna following the design of the original 19th-century vessels. They have delightful cabins (with air con) with antique furniture, en suite bathrooms and a view to die for. These boats only take up to a dozen passengers and so it is a very personal experience. It’s nice to have some fellow passengers to chat with up on deck while watching the banks of the Nile glide by. It looks like scenes from the story of Moses. Palm trees, small villages, donkeys, boys, boys on donkeys, water buffalo, and always the cool green, river, glittering in the sunlight. Dahabiya means ‘the golden one’ in Arabic. We were traveling on the Orient, a wooden vessel with two large sails, one at either end.

Dining on the Nile 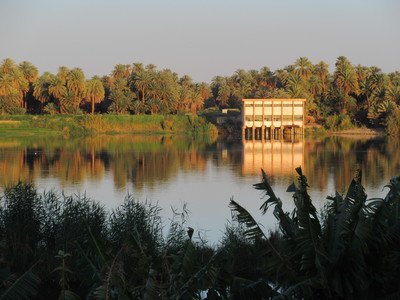 Our ship’s crew were a real asset. Our captain Mr Nubu was said to be the oldest man on the Nile at 78, still sailing and cracking jokes with the crew. The chef conjured up three delicious meals a day with super fresh local ingredients in his galley kitchen on board. We even had tea at 4pm on deck with scrumptious homemade cakes.

The food was lots of salads, grains and fresh vegetables - tomatoes and cucumbers taste so much nicer when grown in the Egyptian heat. Homemade bread was served with some chicken, duck or fish from the river in the evenings. The beef stew was particularly tasty.

Mohmaed Bashek the chef also lead impromptu drumming, singing and dancing in the evening after dinner on deck - a man of many talents. It was all a lot of fun.

Sites along the river The smaller Dahabiya can moor in places where the large cruise ships can’t go, so we got to stop and see lots of interesting but less accessible local sites along the route.

We stopped at the ancient ruins of Al Kap and saw the tombs of the nobles. The hieroglyphics inside these tombs explained much more about the everyday lives of people, than the religious scripts within the the more famous tombs in The Valley of the Kings. The images showed parties where they drank wine and sniffed Lotus flowers. Others showed hunting, agriculture and farm animals.

We took a caleche (horse drawn carriage) to the temple of Edfu which was even more impressive as we pretty much had the site to ourselves for quite a while.

We were pursued through local villages by gangs of curious children, and visited the sandstone quarry where huge blocks were hewn to be sent up the Nile (or down) to construct the incomparable temples of Egypt. These giant blocks were cut from the rock bed with only primitive tools and drills with incredible precision and strength. Tombs set into the rock overlooking the river were nearby with the most amazing view. A bit lost on the dead really!

It is safe to swim in the Nile now, as long as you are careful about the currents. It wasn’t always this way. Until relatively recently, the aggressive Nile crocodile was a real threat to people living along the banks of this enormous river. The ancient Egyptians revered the power of this fearsome creature, and created Sobek the crocodile God in their honour. At the temple of Kom Ombo (City of Gold) there is a large selection of mummified crocodiles, as one specimen was chosen to be a God from time to time and preserved upon its expiry. Today, the dam has contained these predators, and so it was safe for us to swim in the cold, clear refreshing waters of the Nile, which was lovely.

Villa next to Nilo - BLU FLAT -

apt. on the Nile with roof terrace, chef and tours

apt. on the Nile with roof terrace, chef and tours A trip highlight was the camel market at Daraw. On Tuesdays, the market sells lots and lots of camels. Camels are working animals here in Africa but they are also sold as meat. There were lots of young camels (with one leg tied firmly up at the knee to prevent escape) who were looking about curiously but also sheep, goats, cows, bulls, and poultry. The donkey barber giving his animal a bit of a crazy hair cut to show off its best features, boys were leading bulls about and sheep were being made to walk on two legs as their front legs were tied up too.

It’s a dusty noisy experience but full of bargains being struck and disputes bubbling up, as markets often are. The animals here have to put up with quite a lot of rough treatment, I’m not sure the RSPCA would approve, but it’s a fascinating thing to see which will not have changed for many, many years.

A special way to see Egypt

I loved my trip on the Nile Dahabiya boats. The beautiful scenery gliding by, the friendly people and the ancient sites are a pretty unique combination. It’s pretty safe around the Luxor area and if you decide to go there now, believe me, you will be very well looked after. There are bargains to be had and it is a fantastic time to visit the sites without the hordes of tourists that were there a decade ago. I now have a passable knowledge of hieroglyphics and a great respect for the ancient Egyptians who lived there three thousand years ago. I also have a renewed affection for the people who are trying to make a living there today.

These Dahabiya boats belong to Djed Egypt Travel and I can’t recommend them highly enough. There are a few other companies which offer these kind of sailing trips but the attention to detail and the first class service certainly make this one stand out.

Explore Luxor
Good things are meant to be shared!