10 Best Street Food You Must Try In Jerusalem, Israel

Jerusalem’s street food scene is a vibrant one with a medley of culinary traditions to be found. It perfectly mirrors the country’s food culture with a variety of delicacies just waiting to be tasted. Jerusalem is a pioneer when it comes to delicious street food. The infusion of classic Western and Eastern heritage shines through in its cuisine. Its well-balanced dishes have become synonymous with Israeli culture and the city. As you explore Jerusalem’s bustling markets, you’ll be intrigued by a wide variety of mouthwatering street foods on to offer. More often than not, the best places to find authentic Israeli street food flavors are at market stalls and tiny hole-in-the-wall restaurants which have pretty much everyone delving into something delicious. From shawarma and hummus to sabich and falafel, you have plenty to choose from. Here is a compilation of the best street food you must try in Jerusalem, Israel. Sabich is the ultimate meat-free sandwich. Fried eggplants, eggs, and pita are the dream team, backed up by a whole line of salads. Arikha Sabich stall near Mahane Yehuda Market is one of the popular spots to try this sandwich. This dish came into prominence in the 1940s and the 1950s when Iraqi Jews came to Israel. Having originated as a breakfast dish to eat on the Sabbath, it has evolved into a favorite street food for any time of day. Everything is packed into a pita and customized to order, with drizzles of tahini (a silky-smooth dip), hummus (a paste of ground sesame seeds) and amba (a pickled mango sauce). A must-try dish for the busy traveler. Knafeh or Kanafeh is a delicious and rich treat made with unripe cheese. It is baked in crunchy, shredded kadayif (phyllo pastry) filled with a mild cheese – usually akawi (made of pasteurized cow’s milk)– and once cooked, it is drenched in the sweetest sugar syrup that’s lightly flavored with rose or orange blossom water. This results in a sickly sweet flavor that may take a bit of getting used to, but once converted, you’ll never get enough of it! Jerusalem and Nablus are the two places where this classic Middle Eastern cheese pastry treat is a staple. If you’ve never tried it, now is the time! Falafel was popularized in Israel by Yemeni Jews in the 1950s and is now the country’s national dish. The Arabic word ‘falafel’ actually means fluffy, which is in reference to the delicious deep-fried chickpea balls that are served in pita bread. You can pair these with a tahini dip, hummus, and or salad items of your choice such as cumbers, carrots, tomatoes, fried eggplant, cabbage, and pickles. Shalom Falafel and Falafel Brothers Levy are famed for their delicious falafel. The best way to eat falafel is head first so that you can devour all the delicious flavors, one bite at a time! These famous elongated and sweet bagels that are sold on the streets of Jerusalem are affectionately called “baygaleh” by the street vendors. They are simple, yeasted bread shaped like hoops, topped with seeds and baked. Unlike chewy, regular bagels, these are more bready and airier, with a crisp crust and distinctive soft interior, so they’re better for scooping up dips. Some good accompaniments are hummus, baba ganoush, eggplant caviar, white bean dip, or a bowl of good olive oil. You can pick up a bagful at most open-air markets, bakeries, and little roadside kiosks. Bourekas can be found everywhere in Israel. This very popular street food brought to Israel by settled immigrants is served at souks (outdoor markets), both as a breakfast dish and common street food. It is a tasty, light pastry made of phyllo dough and contains various fillings including cheese, mushrooms, mashed potatoes, mushrooms, and spinach. You might also find them topped with pizza sauce or seeds. Bourekas come in many different shapes and sizes. This self-contained, nutritious, and filling pastry makes for the perfect portable snack that can satisfy your hunger cravings at any time of the day. Me’orav yerushalmi, also called Jerusalem mixed grill, is Israel’s signature fast food. It is an assortment of grilled, skewered offal and some chunks of meat with an actual emphasis on chicken spleen, liver, gizzards, and hearts. The meat chunks are fried or roasted over a fire and mixed together with herbs such as onion, cumin, and turmeric. Me’orav yerushalmi is usually served warm inside a pita bread spread with hummus and tahini, together with vegetables, pickles, and fries. The appetizing smells resulting from it are difficult to miss for passersby who wander the street stands that serve this snack. The very humble hummus is the go-to food for most Israelis. It is a creamy, thick dip made from protein-rich mashed chickpeas and blended with tahini, lemon, and garlic and is usually eaten with warm pita bread. Hummus has become imperative at every Jewish festival. Israelis consume it on a daily basis and it can be eaten at any time of the day either as an appetizer or as the focus of a meal. Hummus pairs well with other popular local delicacies such as the famous falafel. The best hummus can be found aplenty in the back alleys of the Old City in Jerusalem.

8. Halva (dessert with a flour or nut butter base) The Israeli halva is a flaky, dense, sesame or tahini-based candy made with a base of flour or nut butter and sometimes includes vegetables (such as carrots). Halva is served mainly after breakfast or lunch as a dessert and it is the foremost comfort food of the Israelis. The taste of halva is often enhanced with the addition of spices, dried fruits, and coconut. Hence, its flavor varies at each street stand. You can always find big chunks of halva at Jewish delis. This dish is definitely worth trying at least once! This iconic Israeli street food is a delectable blend of well-seasoned marinated meat slices stacked on a tall skewer and slow-roasted on a flame. The meat is commonly served with Israeli salad or chopped tomatoes, tahini sauce or pickles, and is spiced. Shawarma rivals falafel as Israel’s favorite street food and is popularly called the “queen of street foods”. This all-round favorite is a must-try dish when visiting the shuks (outdoor markets) in Jerusalem. The Israeli schnitzel made its home in Israel, thanks to the Ashkenazi Jews. It usually comprises thin, fried slices of boneless chicken covered with a layer of egg and breadcrumbs. The thinness of the slices is what lends succulence to this already flavorful dish. Its juicy coating comes in a variety of colors, tastes, and spices. Schnitzels at street stalls are usually served tucked into pita bread with a side of fries, pickles, hummus, and tahini. The vegetarian versions feature corn and tofu but are just as delicious. If you’re looking for something light and airy to munch on while taking a stroll around the city, the schnitzel can never disappoint!

Wander the streets and taste the flavours

For the adventurous, yet budget-savvy traveler looking to explore a good street food destination, Jerusalem is one of the best. The exciting part about Jerusalem’s street food is that there are endless combinations waiting to be tasted and though street cuisine has always had its place in society, its popularity is now reaching new heights. Bon appetit! 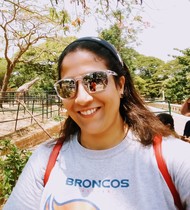 Chandana is a versatile writer with nearly two decades of experience in media, spanning clients across the globe. An avid traveler, she enjoys experiencing every new place to the fullest. Having...Read more
Want to contribute as a Local Expert?
Register Here
Hotels
Lowest Price Guarantee

Explore Jerusalem
Good things are meant to be shared!