If Chiang Mai were a high school student, it would walk with a jock’s swagger, have the student body president’s charm and wear the threads of an artsy kid. It has a ton of hustle, bustle and activity without the insane traffic of Indochina’s other main cities, and exemplifies old world meets new world. Here, wats, cart vendors, tuk tuks and market stalls coexist with McDonalds, Starbucks and Angry Bird loving Thais (seriously, the Thais are OBSESSED with Angry Birds). More than anywhere, Thai tradition and modernity clash in spectacular fashion at the Thaphae Boxing Stadium. No visit to Chiang Mai is complete without experiencing a Muay Thai fight and no Muay Thai fight is better experienced than at the Thaphae Boxing Stadium. While other venues exist throughout Chiang Mai – and numerous locals will stop you on the street with flyers touting Muay Thai exhibitions and underground fights – there is something to be said for convenience, entertainment and safety.

Located a fifteen minute walk or quick tuk tuk ride from Chiang Mai’s entertaining night market, it’s easy to grab dinner and drinks, ogle lady boys and do some gift shopping before making your way to the stadium. The entrance to Thaphae Stadium is on Moon Muang road, opposite Thaphae gate and next to the ‘Top North Hotel’.

The fights start at 9pm, but if you’re looking to get prime seats, arriving early at the 800-seat venue is not a bad idea. Tickets can be purchased at the door and range from 400 THB / 11 USD for General Admission to 600 THB / 16 USD for VIP ringside seats.

The nice thing about Thaphae is that it caters to both local and international audience so, while other, potentially ‘more authentic,’ venues may exist, there is a sense of comfort and decorum amidst the gambling and drinking spectators.

It’s okay not to know your stuff, but know it 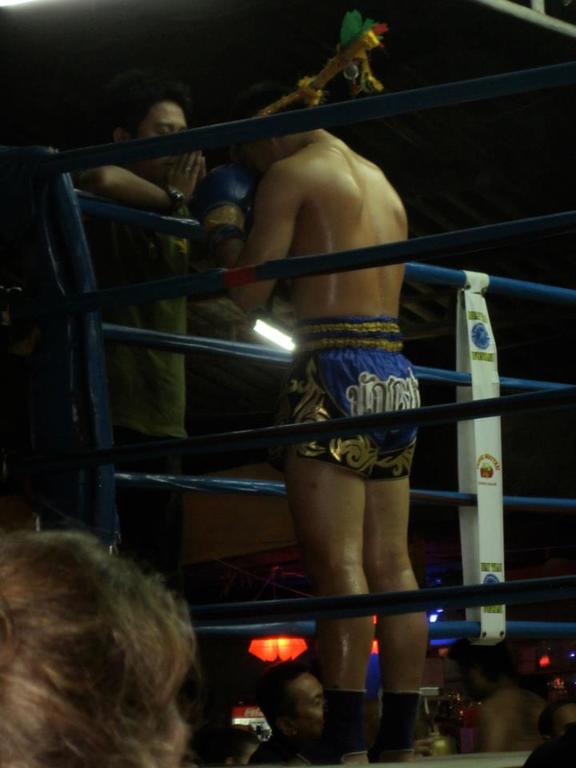 The energy at Thaphae is contagious, so even if you know absolutely nothing about the sport of Muay Thai, you’re guaranteed a night of entertainment that can captivate even the most clueless of onlookers.

That said, it doesn’t hurt to attempt a little background research before attending a fight as there is no guarantee that your seat neighbor will be willing to break the event down for you play by play – though some will be delighted to impart their wisdom.

To help you out, here is a quick breakdown of the sport: Muay Thai consists of five rounds; each round lasting three minutes, with two-minute rest periods in between (the rules are slightly different for females). Points are earned by strikes using a punch, kick, knee or elbow. The boxers are dressed in red or blue Muay Thai shorts dependent on what corner they are in, and, in response to the pressing question on your mind, yes, cups are allowed and encouraged to protect groins.

Also, prior to the start of each match, expect to see some sort of ritualistic dance. Apparently, the dance pays homage to the teacher of Muay Thai and is a parting thanks to the coaches before one or both individuals experience a severe beat down.

Now you know your stuff a little better than the next Joe Schmo who doesn’t. You’re welcome.

What you’re paying for Muay Thai boxing fights take place every night from Monday to Saturday and your ticket gains you access to 5-8 fights, a “free” welcome drink and a night of great entertainment.

Not every fight is a showstopper, but you can expect a variety of fighters. Types of fights include up and coming teenage fighters who eat, sleep and breathe the Muay Thai lifestyle; insanely fit women who tend to aim their kicks at one another’s baby making regions and will leave you sympathetically clasping your own; buff male professional fighters and well known champions.

Pick a favorite for each round and shout along with the rest of the crowd to cheer on your fighter while pop music and hip hop blare in the background. You can even Instagram or Snapchat it live to all your friends back home using the stadium’s free Wi-Fi. Tradition meets modernity.

Oh, and if you feel especially strong about anyone in the line up, there is plenty of betting happening on the premises – though the safe move is to keep your money in your wallet where it belongs; no need to go asking for trouble.

Stick around for intermission While the intermission of a show is usually the time to get up, stretch, go to the bathroom or head to the bar to buy a drink, that is THE LAST thing you should do when intermission rolls around at Thaphae Boxing Stadium.

The program lists a “special fight” for the intermission and, considering the eccentricities of Chiang Mai, one might predict ladyboys or animals to come on stage, but what actually takes place is better than anything you could imagine. Spoilers alert, so if you want to be surprised, continue to the next section.

Here’s what goes down during Thaphae’s intermission: Six young fighters are brought into the ring, blindfolded before the crowd, positioned in different parts of the ring, then, at the sound of the buzzer, are left to fend for themselves to the likes of Sak Noel’s hit song Loca People. It sounds absolutely awful, but add a few pints of Chang beer to the mix and it is pure comedy.

The guys in the ring spend half the time swinging and kicking at air, and every so often the referee will take it upon himself to fling one fighter into the other until people actually made contact. A favorite move is ‘the helicopter’, which involves spinning in circles, arms out, until fighters run into each other, then swing.

You will find yourself caught between gasps of horror and tear inducing laughter, and it is worth every Baht you paid.

Your turn to try You’re at the stadium; you understand why the Thais love their Muay Thai, and now, a few drinks deep, you get the crazy idea that you want to try this terrifyingly wonderful sport. Believe it or not, you’re not the first.

Fortunately for you, Thaphae Stadium partners with the Chay Yai Muay Thai Gym to offer Muay Thai training classes, so, if you wake up in the morning sober and still want to pursue a class, title holding and English speaking instructors are available for group and private lessons. Good luck, book in advance, and may the force be with you.

A total knock out

Chiang Mai is an amazing place, but unless you plan to check out a Muay Thai fight, you aren’t getting the full experience. For a ‘total knock out’ of a night, Thaphae Boxing Stadium brings the old world and new world together for an unforgettable and entertaining evening. 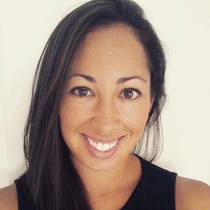 The stories that captivated me as a kid were those of eccentric characters who took wild adventures and dared to be different; ever since, I’ve wanted to be one of them. Two years ago, I grabbed...Read more
Want to contribute as a Local Expert?
Register Here
Hotels
Lowest Price Guarantee

Explore Chiang Mai
Good things are meant to be shared!