10 Best Palembang Dishes That Will Leave You Wanting More

Palembang, the capital of South Sumatra, doesn’t only come with cultural attractions and historic buildings, its incredible foods always draw people’s attention. The host of the monumental Ampera Bridge offers a unique blend of Chinese, Malay, and indigenous tastes and there are so many interesting and tasty dishes to sample if you’re in the area.

If this piques your curiosity, you better learn more about what type of delights await your taste buds. Here are the 10 best Palembang dishes you need to discover during your trip! Everyone will agree that the dish pempek should be at the top of the list. Who can deny its deliciousness, with its crunchy, mild texture and sour, savory flavor? River fish and sago flour are the most vital ingredients of this dish and you will never find it boring, as it has numerous variations in shape and filling. There is elongated pempek, submarine pempek, shrimp pempek and much more. Don’t forget to dip it in the spicy vinegar sauce, known as cuko. Tekwan is a close relative of pempek – they both have similar ingredients and cooking process. What makes this fried, starchy ball distinguishable from pempek is that it’s smaller in size. It’s usually served with a heavenly prawn broth, rice vermicelli, ear mushrooms, and a sprinkle of fried shallot and spring onion. It’s indeed best devoured quickly. Laksan is another dish made of a mixture of ground fish meat and sago flour and is usually eaten during religious festivities. The dough is shaped, boiled, and drained and finally simmered with coconut milk and some spices, which consist of chilies, shallots, garlic, bay leaves, and galangal. Sprinkle it with fried shallots, to make it more flavorful. Kemplang is a type of fish crackers, basically made by using the same fish dough. A mixture of freshwater fish meat, salt, and sago flour are the main ingredients. The boiled dough is thinly sliced and dried under the scorching sun. Then, the raw chips are fried to a crisp. They are a perfect match with soupy dishes or fried noodles. Maksuba cake is a favorite dish among the Palembang people. The texture is fluffy and delicate and the flavor is sugary, yet luscious. Duck eggs and condensed milk are required to create the primary layers of this dish and it comes together through a slow cooking process – it takes eight hours just to make it! The dessert is often used as an offering or presented during local celebrations. Mie celor is a typical dish which is quite similar to Japanese soba. Yellow noodles are doused with coconut gravy and served with shrimp, a boiled egg, and bean sprouts. Toppings might include chopped celery, spring onion, shredded chicken, and a sprinkle of fried shallots. Slurp them while they’re still hot. Martabak har is both legendary and phenomenal. Unlike other typical egg dishes, this Palembang specialty is soaked in a curry gravy. The yellow broth is comprised of several ingredients, such as turmeric, nutmeg flower, cinnamon, chilies, curry leaves, diced potatoes, and coconut milk. To add to the flavor variations, you can have it with a vinegar sauce.

Kue srikaya can be found throughout Palembang, particularly at traditional markets. This egg-based cake has a sweet and savory taste. The green color is obtained from aromatic pandan leaves. To make this snack, a batter consisting of eggs, sugar, thick coconut milk, is put into pandan leaves and is steamed for about 15 minutes.

At a glance, celimpungan looks very similar to tekwan. What makes this flavorful, starchy dish a bit different is the shape of the dough – making it bigger than tekwan. A coconut milk gravy, enriching the dish’s taste, is another highlight to notice. The thick sauce is simmered with turmeric, pepper, and bay leaves.

Don’t get confused by its name! Model is a type of soupy dish, comprised of fish balls, rice vermicelli, and an aromatic, clear shrimp broth. Other ingredients might include ear mushrooms, chopped cucumber, prawns, and fried shallots. Adding vinegar sauce is definitely recommended.

Try Palembang food to enjoy the combination of sweet, sour, and savory!

To sum it up, most of Palembang’s food is comprised of fish dough, coconut milk, and vinegar sauce. The local delicacies can only be described with one word – delicious! 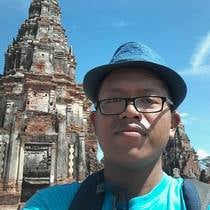