London is one of the great cities of the world. Oscar Wilde even went so far as to say that “If a man is tired of London, he is tired of life”. We certainly agree. Apart from being a colorful cosmopolitan city, it also offers beautiful parks, fascinating castles, and museums galore- perfect for keeping the littlies entertained. Many think summer is the best time to see the city in its full glory but we think spring signals fewer crowds, less of that merciless heat and more smiles all around. This hit list of things to do in London has been road tested with Miss 1 and Master 2, so we know it’s sure to please!

The West End of London is one of the world’s premier theatre districts. The first theatre opened on Drury Lane in 1633 (Yes…. Drury Lane, of “Do You Know The Muffin Man” fame!) and is home to about 40 theatres, mainly beautifully restored Victorian marvels of architecture in themselves. To fully immerse yourself in the West End experience, a walking tour is highly recommended. Foot traffic is dense around here so depending on the age of your little ones, we would suggest bringing either a little portable stroller or putting the kids in a baby carrier/backpack. Going on a walking tour will also help you decide which show to watch!

At any one time the children are spoilt for choice; world renowned productions such as Matilda, The Lion King and Aladdin enjoy runs of a year or longer. Top tip: buy afternoon matinee tickets on a weekday at the official TKTS discount theatre ticket booth located at Leicester Square. Nobody pays full price for theatre in London! This is especially great because you’re never sure if the little ones will sit through the entire performance- which is heartbreaking if you’ve paid through your nose for tickets! 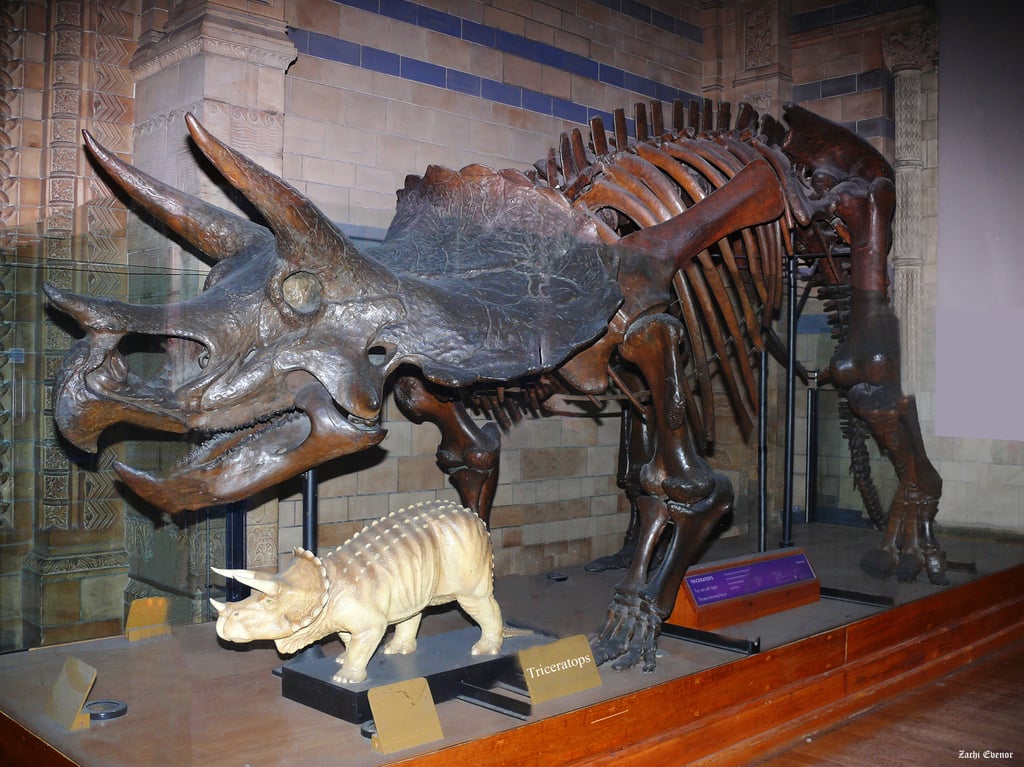 Source: Photo by user Zachi Evenor used under CC BY 3.0

If like me, you have a dino-crazy little boy, then the Natural History Museum will be a bigger treat than ice cream. The museum boasts one of the best collections of dinosaur exhibits, including a Triceratops’s skull, a dinosaur egg and the most complete Stegosaurus specimen in the world. Entry to the museum is free, and gives you access to 36 galleries including but not limited to, the Dinosaur zone, as well as the Mammals, Fish, Reptiles and Amphibians Galleries. Learn about the Earth in the Red Zone, which tracks the history of evolution.

The museum is home to the Darwin Centre, which allows children a peek into the work of a scientist. This is a great activity for a “bad weather day”, which you are bound to have in Blighty! Expect to spend at least 3 hours here. For older children (aged 7-11) the museum has a new series of sleepovers titled “ Dino Snores for Kids”. This is a monthly ticketed event. Set up your camping spot in the museum’s designated galleries, go dinosaur hunting (armed with only a flashlight, eek!) and participate in planned activities. Wake up to an awesome breakfast before the museum opens to the public. Cool!

3. Museums are (not) boring

Expanding on the museum theme, the British Museum is also a gem for entertaining the kids, for free! However, expect to pay a small fee for special exhibitions. The museum opens at 10am and offers late night Fridays. For children under 5, the museum runs the “Little Feet” series which is an interactive and sensorial experience based on the exhibitions running at that time. As these are on a drop in basis, go early to avoid disappointment! The museum gift shops are also nice for a browse. Pick up some educational souvenirs and games here to reinforce learning.

4. Sunsets at the London Parks

Go for a run about! Children get really tired and cranky when too much is crammed into a day’s activities. Our tip for happy traveling with kids is to keep itineraries light (1-2 attractions a day) and to let them stretch their little legs wherever possible. In a busy city like London, more likely than not you will want them strapped in their buggies and carriers while traveling point to point to keep them safe. Luckily, London offers a vast array of parks and green open spaces perfect for letting off steam and enjoying the fresh air. Buy some sandwiches, bring a blanket for sitting on and let them explore! Not only is this less stressful than eating at a restaurant, it is also a more budget friendly option.

City parks include Regent’s Park, which you can go to after visiting the London Zoo; and St James’ Park which is just 5 minutes from Buckingham Palace, the Houses of Parliament, Big Ben and Westminster Abbey. While there be sure to go to the St James Park Playground, your children will love playing on the little stone bridges and rock garden. There are plenty of other lovely green spaces around London if you are so inclined, such as Hyde Park, Hampstead Heath and Kew Gardens. Weather-permitting, of course!

A Guide to London Parks If your feet are sore after all that exploring around the beautiful Kew Gardens, opt to take a river cruise back to Westminster. It is perfect on a glorious day and is a hit with the children! The added bonus on our cruise was the Captain. My kids were convinced he was a pirate, which tickled them pink. The boats are comfortable and well appointed with clean facilities on board, as well as really friendly and helpful staff who thought nothing of lifting our stroller on to the deck for us. From Kew Gardens the boat takes about 1.5 hrs to get into Westminster, which is a good length of time for cranky ones to get a quick nap on the go too.

Formerly #9476 with Abellio London, AD Trident/Enviro 400 is one of a number now in open-top format with Big Bus Tours London as DA224. Seen in Westminster yesterday.

Everyone knows this favorite children’s song! You will probably hear it a hundred times over before the end of the city tour, especially since it is a double decker, open top, red bus just like it is in the nursery rhyme. It is worth it though, to see the little excited faces as they climb up the stairs on to the top deck, shouting “Wow!!!” at the top of their little lungs. On a mild day this is a great way to see the city, with the wind tousling your hair as you listen to the commentary about the city as it unfolds before you. Tickets are available for 1, 2 and 3 days and can be bought on Viator. There are 3 main routes which take you all over London and are perfect for exploring all the attractions we’ve suggested! Windsor Castle is the oldest working royal residence in the world today. It is also the largest. The Queen is known to spend her weekends and a month over Easter here. To know if the Queen is “in”, one just has to look for her royal standard flying from the Round Tower. We were lucky enough to spot her in her chauffeured car leaving the castle for the Royal Ascot on the day of our visit; we even got a royal wave as her car drove past. How many people can say that about their trip to Windsor Castle?!

One great thing about traveling with kids in London is that entry to most attractions is free. The Windsor Castle is no exception and is free to children under 5. From London, there are numerous tours available, mostly leaving by train from the London Waterloo station. If you ask us, Buckingham Palace’s changing of the guard display is overrated. It is heaving with tourists and our little ones never get a good view! All that jostling does not make for a memorable experience. Windsor Castle, on the other hand, is a good option for a day trip and gives the kids the opportunity to get really close to the guards. Don’t miss it- Changing of the Guard is on at 11am, Mondays to Saturdays.

There are also plenty of other family friendly activities at the Castle, such as a free Family Tour and family Activity Trails. Children will also enjoy looking at Queen Mary’s Dolls’ House, the State Apartments and Henry VIII’s 500 year old suit of armour in the Lantern Lobby.

25 reviews
Oops, this activity is currently unavailable. Check out these alternative activities in the same location.

A taste of London (with kids!)

In our opinion, a “taster tour” of London with little ones would require a minimum of 5-7 days. This would allow you to experience all of the “essential” London attractions at a reasonable pace. London is a unique city that can be returned to time and again, and you will make new discoveries each time! Oscar Wilde certainly knew what he was talking about. It would be no mean feat to get tired of London.