If you live in Tokyo, then you have likely seen the very flashy advertisement cars for Robot Restaurant. Kabukicho? Robot? Something shimmering… you just can"t ignore it! It has been reported on internationally by CNN and has been visited by international stars including famous movie directors. This super popular spot for foreign tourists is none other than Robot Restaurant, and It’s located in an “unexplored part of the city.” Let us explain this new type of entertainment that has surprisingly been attracting a large number of female customers!

After making a reservation, head for Kabukicho, Shinjuku! Robot Restaurant is reservation only. Reservations can be made by phone or online. There are four show times per day at 5:00pm, 6:40pm, 8:20pm, and 10:00pm, and you can reserve the date and time you want. The restaurant is a five minute walk from Shinjuku Station’s East Gate.

The doors open one hour before the show, and we recommend arriving right when they open. The reason is that even before the show starts there is a lot to look at. Right off the bat at the entrance you can see a large female robot moving every which way. Next is a vivid, glittering staircase that was used as a location for a shoot by Mika Ninagawa. As you are drawn into the unique setting (be sure to watch your step as you descend), you will come upon rows of shining golden sofas (see photo). Looking at photographs of celebrities who have visited such as directors Tim Burton and Takashi Miike and model Kiko Mizuhara, you can drink cocktails made by beautiful girls, and enjoy the time until the show starts in a place completely unlike what you normally experience.

The robot show starts with a "female battle" on drums! As the start time nears, the ushers will guide you to the show floor located two floors underground. For an extra 1,000 yen you can get a boxed meal, so those who requested them can enjoy the meal with tea as they take their seats.

The show starts with the sound of a beating drum. Just as the name “female battle” implies, the female dancers split into two teams and square off with drums and portable shrines. Over half of the customers are foreigners, so things get lively with cries of “Whoa!” and applause from the crowd. It feels like you aren’t even in Japan, and we mean that in a good way. You are also treated to other things like a marching band, pole dancers with their breathtaking stomachs visible, and more. You are even allowed to take photos during the show. Many places like this don’t allow cameras, so being able to take a photo of a posing dancer is part of what sets Robot Restaurant apart.

Here they are! The giant female robots that give Robot Restaurant its name! The show is broken into several parts including a scene where a mysterious panda battles a robot, a scene where a female warrior rides a giant dragon, and a scene where a giant shark eats a villain, amongst others. It is quite surreal, and the show unfolding right in front of your eyes is an experience that can’t be topped. Finally, in the second half of the show the giant female robots you’ve seen on the advertising cars appear! The dancers wear the dazzling costumes as they enter. As the uptempo music plays loudly, the customers wave the light sabers they were given earlier in rhythm with the dancing, and the voltage of the entire area goes up! It seems as though each one of the giant female robots costs a hundred million yen, and afterward there is time for you to take a photo with them with your own camera and completely get your fill of robots.

If you are chosen as a warrior you can battle a robot! Among the customers a single person will be selected to battle a robot. You don’t know who will be selected so your heart will pound as you await the verdict. If you are chosen, cast aside your feelings of embarrassment and think how lucky you are and give it your all! After weapons like oversized gloves and a paper fan are provided the battle will start. The opponent is a super strong robot so the battle won"t be easily won. The other customers will be cheering you on. Foreign customers in particular seem to really get into shouting encouragements like in a pro boxing match. If you win the fight you get a prize, so don’t hold anything back and throw all of your anger and stress into every single punch, punch, punch! The stronger the warrior the more excited everyone will get. Warriors are not chosen in advance, so if you feel up to the challenge be sure to exude an aura of confidence and have that look about you that tells the world you are ready for the fight.

Finally you can dance to the max along with the dancers! As the show nears its end, the voltage in the area reaches its peak. The dancers climb aboard the dazzling giant robots and dance with passion right in front of you. At first the customers are unsure how to react, but soon they are swinging their light sabers and high-fiving the dancers as they realize they might as well enjoy the ride. Rather than a restaurant it feels like you’ve entered a theme park, and after the show is over you are full of excitement as if you just stepped off of a roller coaster. It truly must be seen to be believed. How about going to see what sort of place it is? We guarantee that after going you won"t be able to wait to tell your friends all about it!

So what did you think?

There are sure to be some people who are a bit uneasy due to the amount of skin showing and the pole dancing, but there is no need to fear! There are many female customers, and it feels like a new theme park. This tourist spot that has gathered attention from all over the world is definitely worth seeing at least once. If you like unique things or are looking for something interesting, invite your friends to the “unexplored part of the city” and enjoy the show. 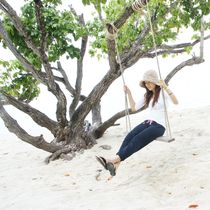