Kanazawa Confectionary Wooden Molds Museum does not appear in most touristic guide books and pamphlets, but it’s a highly recommended place to visit if you want to learn in depths the history of Japanese confectionary. Kanazawa is the home of some popular types of Japanese confectionary, like “rakugan” (dry sweets of pressed starch and sugar) or “kinkato” sugar sweets, and in this museum you can learn a lot about this local culture. One of the highlights is the exhibition of many different wooden molds which are usually used for making Japanese confectionary. The museum is an ideal place to feel the peculiar spirit of Kanazawa’s confectionary tradition.

So cute that you don’t want to eat them! Kinkato candies for the Peach festival Over a thousand different confectionary wooden molds are exhibited at Kanazawa Confectionary Wooden Molds Museum. Some of them have been used for generations in traditional confectionary shops. But first let me explain more about the typical local sweets rakugan and kinkato candies. Generally, Japanese sweets can be divided into two groups: soft raw sweets, such as those with red bean paste, and harder dry sweets. Rakugan and kinkato candies belong to the latter.

Kinkato candies are traditionally used as a decoration during the Peach festival (also known as Hina-matsuri in early March) and as an early spring present between related families. They’re made by melting sugar and casting it into the mold, then hardening it and dying so that the candies resemble seasonal foods like sea bream, bamboo grass leaves or bamboo shoots. The sea bream-shaped candy is especially popular during the Peach festival as it symbolizes auspicious future and is the more valuable the bigger it is made. Some candies can be produced quite large.

On the photo you see the candies I bought from Koshino shop in Kanazawa city. It’s a small shop, but it sells some rare types of kinkato candies until early May every year. Outside of the spring season you have to order specially. Koshino shop, established 90 years ago Phone number: 076-252-1856 Location: Along Johoku-Odori street, before the crossing at Moriyama-Itchome, walk for about 15 minutes from Higashi-chaya district By the way, kinkato candies are made of sugar, so after the decoration is over, you can simply crush them and put the sugar pieces into your tea, coffee or cooking.

They come in many different shapes, such as fish, pomegranate, vegetables, grapes, bananas and others, therefore little kids really like them. The sizes also vary. For example, the fish one on the photo above is a bit smaller than a human palm. That is why confectionary shops need a big variety of wooden molds. Now let me move on to the rakugan sweets.

Rakugan sweets began as a tax evasion scheme to save on ingredients! Rakugan are sweets made of rice starch combined with sugar and syrup cast into the mold and later dried. As they use refined Japanese sugar, these sweets were adored by the ladies in the shogun’s harem. They come in many different shapes according to the season: plums or sakura petals in spring, bamboo grass leaves, clouds, then gingko or maple tree leaves and chrysanthemum flowers in the autumn. But in fact their shapes were originally developed as a tax-evasion scheme to save on expenses for ingredients!

The symbol of Kanazawa’s rakugan sweets is the 400-year-old famous “Choseiden”. It was developed by the well-known confectionary maker Morihachi in Edo period, and they’re still using the same recipe now. Another famous maker, Moroeya, produces a rare type of raw rakugan sweets. Both types are something you must try when you visit Kanazawa! (On the photo you can see Moroeya’s plum and bell-shaped rakugan sweets)

Every old confectionary shop uses its own unique wooden molds. There is a great number of different molds used for making all the different shapes of kinkato and rakugan sweets. Kanazawa Confectionary Wooden Molds Museum introduces them all.

Impressive! At Kanazawa Confectionary Wooden Molds Museum you can see many old molds used for making some of the city’s best sweets! Kanazawa Confectionary Wooden Molds Museum displays some of the wooden molds that Morihachi maker has used throughout the centuries. They are literally over a thousand! You can see them on the second floor of Morihachi’s main shop at Hashibacho near Higashi-chaya district. All the wooden molds used for making rakugan sweets are displayed on the walls. Right after entering inside the room you will be first impressed by their enormous number, and then by the skills of the craftsmen who created them. It’s really stunning!

The museum displays wooden molds grouped into several time periods, starting from Edo and going all the way to Showa period. There are hundreds of different types: wooden molds in the shape of Kaga feudal domain’s plum flower crest, special molds for sweets which were sent to the shogun in the capital, molds in the shape of characters used for municipal ceremonies, molds used for candies that were given as a present to soldiers during the war, molds for sweets given to ill people, and many, many others. By exploring the exhibition carefully you will learn many things about the spirit of the past. In the museum you can also see some wooden molds for making kinkato candies in the shapes of pomegranate, banana and various flowers. All of them look beautiful and expressive, and you will be amazed by the fine workmanship. Especially the large molds are unique to Ishikawa prefecture and require a difficult technique for their creation. The ones that Morihachi maker use for their big fish-shaped kinkato candies are 30-centimeter long, 60-centimeter wide, 15-centimeter thick and symmetrical. They are the oldest kinkato candies wooden molds, a must see! In the museum there is also a video room where you can watch documentaries about confectionary making. You will even learn about the metal molds used for making burnt-in marks that we often see on some sweets or use for art decoration. (on the photo you can see some metal molds)

Tired from walking around the city? Then have a delicious Japanese sweet with coffee! There is a little tea room on the second floor of Morihachi’s main shop where the museum is, so you can try the sweets right there on the spot! They’re nice to look at and nice to eat! You can choose between 5 types of seasonal raw Japanese sweets. Have them together with green tea, or Kaga twig tea, or another type of rare Kaga region tea. The sweetness will restore all your energy lost in exploring the city. The combination of coffee and Japanese sweets is also typical for Kanazawa. Personally, I recommend it!

Kanazawa’s confectionary products are known for being quite sweet. One of the reasons for that is the local climate. In order to survive the humid snowy winter, people here need food that can be preserved for long time and be rich in calories. Also, back then sugar was a precious item, so using much of it boosted up the luxurious quality of the products. Therefore the delicious Kanazawa sweets like rakugan and kinkato candies, together with the tea ceremony, are a result of the local climate and a long historical tradition.

In Kanazawa, Japanese sweets are a form of social courtesy and hospitality. They’re given as presents for good omens and as a sign of celebration. This is a deep-rooted local culture in the city. In these Japanese sweets you can find the traces of the history and local art. Rediscover the charm of Japanese confectionary from a new perspective and make sure you visit Kanazawa! 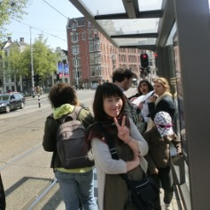