Kanazawa, Japan: 9 Best-Preserved Temples & Shrines To Visit In A Day!

Previously a hidden gem in Japan, Kanazawa was often overlooked by foreign travellers because of its relatively remote location off the main bullet train (Shinkansen) track and public transportation network. Now, with the Shinkansen going to Kanazawa from both Tokyo station and Ueno station, it has become more convenient to access. Thus we are starting to see foreign media picking up on Kanazawa.

As one of the most well-preserved Edo-period cities in the country, Kanazawa is a destination rich in history and culture. Because its culture, architecture, food and ambience are very similar to Kyoto, it is also known as “little Kyoto” to the Japanese. If you love Kyoto for its sheer number of elegant temples and shrines, you will definitely love and enjoy “little Kyoto” too. So go ahead and enjoy these 9 exquisite temples and shrines to go around in a day in charming Kanazawa, without the crowd like in Kyoto!

Erected by Aoki Gohei, one of the chief retainers of the Maeda clan in 1650, the Korin-ji Temple is the top spiritual power spot in Japan where devotees go to pray for love and marriage. To pray at Korin-ji, start by walking three times around the “Road of Happiness” inside the temple’s garden. After that, touch your Chinese zodiac sign image, followed by praying at the statue of Fudo deity. It is believed that you will be blessed with fair beautiful skin if you touch the deity!

Besides seeking spiritual power at Korin-ji, you will be able to immerse yourself in the pretty sight of flowers here too. Don’t miss the chance for a best view of the lovely cherry blossoms around late March to early April here. From late April to early May, bright crimson-coloured Kirishima azalea flowers in bloom delight visitors while beautiful white amaryllis flowers fill the temple grounds around late September to early October. 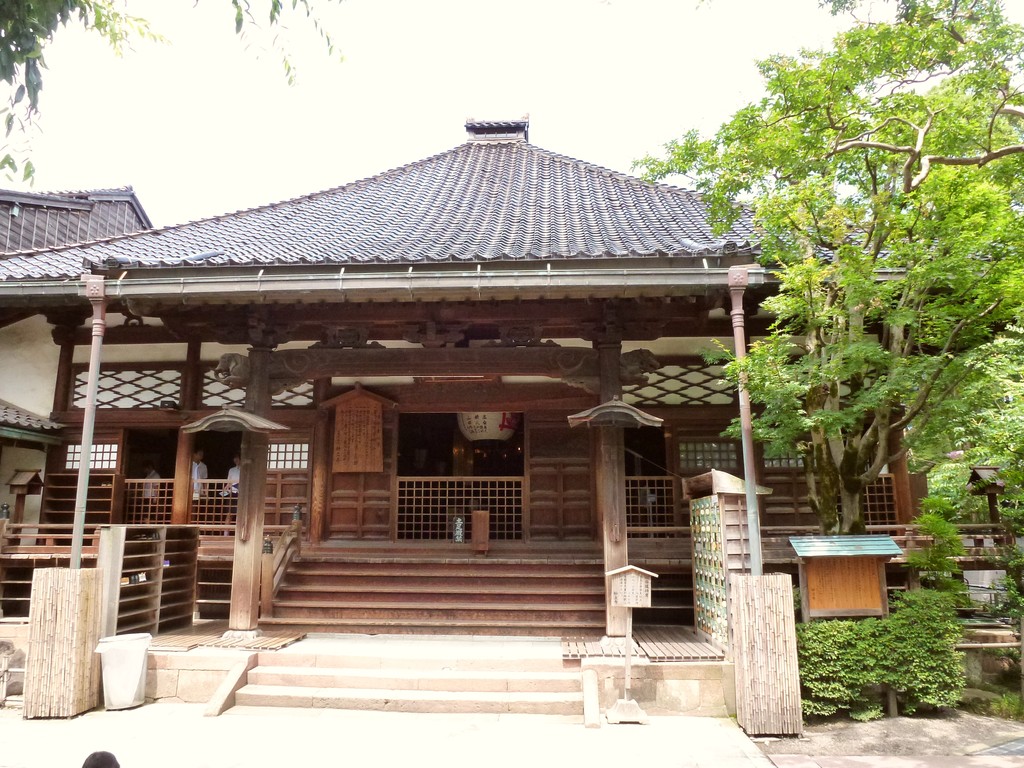 Nearby the Korin-ji Temple is another well-known temple in Kanazawa called the Myoryuji Temple (妙立寺). Its history dates back even earlier to 1585, and its smart and sophisticated structure has earned the temple its nickname as the Ninja Temple. Myoruji looks like a 2-story building on the outside, but it is actually a four-story building with a complicated structure designed to fool enemies and intruders. Head to the Ninja Temple to see this cleverly-designed ancient architecture now!

Opening Hours: 9 am - 4.30 pm (till 4 pm during winter) daily except January 1 and infrequent irregular closures.

Access: 5-minute walk from the Hirokoji stop on the Kanazawa Loop Bus 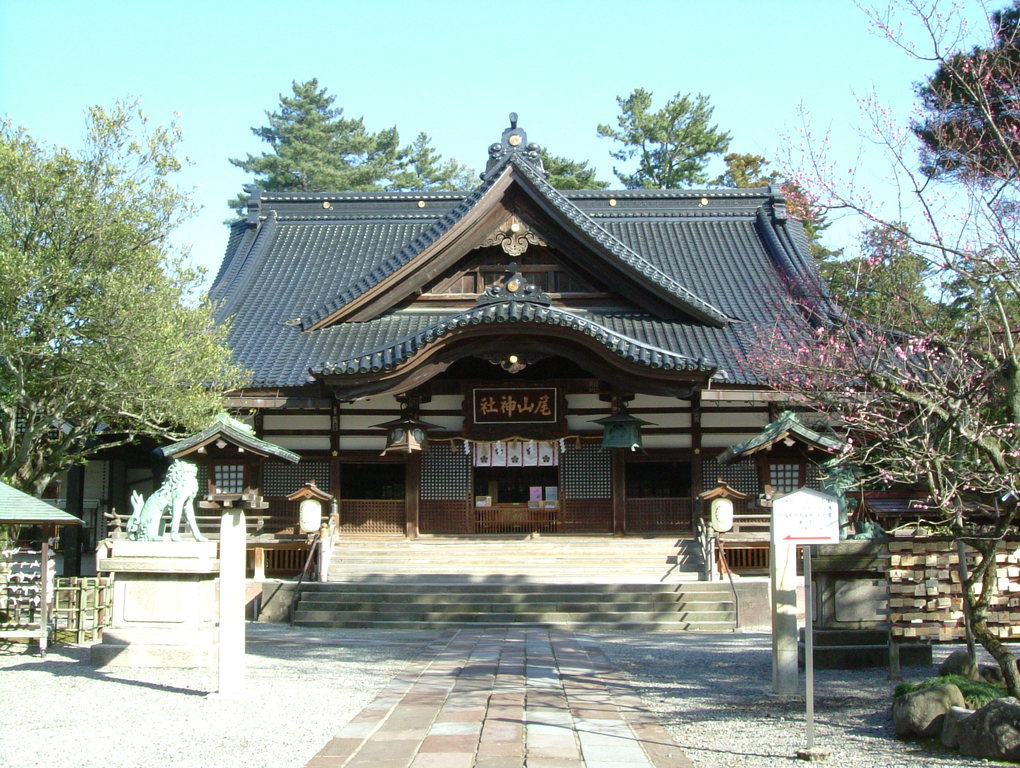 Source: Photo by user Yusuke.ogawa used under CC BY 2.5

Designated as an important cultural property of Japan, Oyama Shrine is known for its unique gate that was designed by a Dutch architect, using elements of European and Asian religious themes. The first storey of the shrine displays a mix of Japanese and Chinese influence, while its upper storeys feature a Dutch-style stained glass window. Besides a statue of the Lord Toshiie - the first lord of the powerful, local Maeda Clan on the shrine grounds, there is also a beautifully landscaped garden with ponds and bridges, where you can take a nice stroll in.

Access: short walk from either Minami-cho or Korinbo bus stop

The Kanazawa Shrine is located nearby to the popular Kenrokuen Garden, but it is often missed by foreign visitors as it is not as famous as the latter. Housed in a red beautiful ancient building, the shrine has been the guardian of the Kenrokuen Garden. Just like the well-known Kyoto Fukushi Shrine, there are many red torii gates on the shrine grounds. 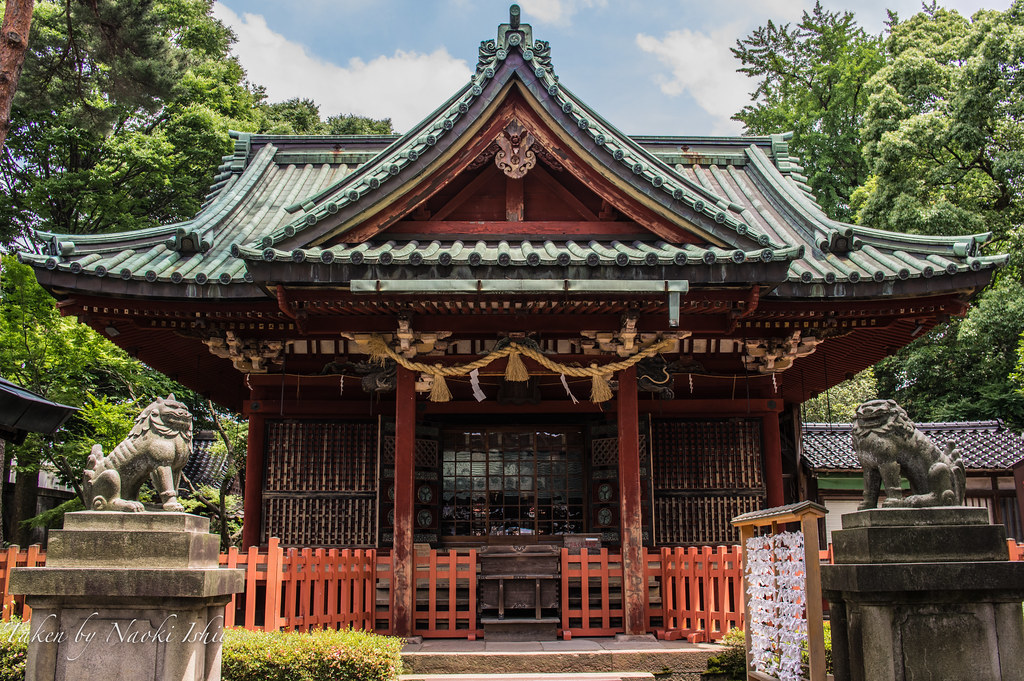 Located nearby Kanazawa’s largest fresh food market since the Edo Period - the Omicho Market, the main building of Ozaki Shrine has been designated as an important cultural property in Japan. Ozaki Shrine was constructed in 1643 for Kaga’s fourth generation lord - Mitsutaka Maeda. As Tokugawa Ieyasu, the founder and first shogun of the Tokugawa shogunate of Japan is enshrined here, you will be able to see many symbols of Tokugawa on the shrine grounds,

Feeling a little tired by going around to visit so many temples and shrines in a day? Check out the unique Tera Cafe in Hoshoji Temple! Hoshoji Temple is located in the largest temple district - “Teramachi Jiingun” on the southern side of the Saigawa river, near the Hamagurizaka intersection. In the cosy cafe that just started operations in April this year, you can enjoy Kaga-bocha tea, matcha green tea, and coffee alongside some delectable Japanese confectioneries. Do take a good look at the cool interiors filled with calligraphy art while you immerse yourself in the serenity of the temple!

Opening Hours: 10am to 6pm daily except Tuesday (Cafe).

Duration: around 2 hours (include visit to temple cafe)

As a branch of the notable Higashi Honganji 東本願寺 in Kyoto, the Higashi Betsuin Temple in Kanazawa is a hidden gem often overlooked by even the locals. The entire temple grounds bring you back in time to the Edo Period of Japan, with a grand main building and beautiful garden. Immerse in the serenity of this less well-known temple that was originally built in the Kanazawa Castle area!

Before you enjoy a unique Japanese traditional teahouse experience at the notable Higashi Chaya District, why not check out the peaceful Enochoji Temple located at the entrance of the district? The old temple houses the memorial tablets of Toshitsune, with complete Buddhist scriptures kept in the building constructed with stones. Seek some quiet “me-time” at this ancient temple before you proceed to watch the entertaining geisha performance!

The Sankō-ji Temple is a beautiful little temple erected in 1635. Because an assassination occurred in the temple, some parts of the temple grounds had to be reconstructed. For example, the temple gate you see now was rebuilt in 1991. Guardians of the temple are engraved on the gate.

Price: Free. Call in advance for an appointment to enter the hall.

A spiritual day-tour in Kanazawa

It doesn’t matter if you aren’t a Buddhist, because you can still seek solace in this spiritual day tour to these 9 best-preserved temples and shrines in Kanazawa. Immerse in the serenity of the charming architecture and forget your troubles for the day. Enjoy!

Explore kanazawa
Good things are meant to be shared!