Best Things To Do In Buriram, Thailand

As an immediate disclaimer, Buriram (which literally means City of Happiness) is both the name of the city and the province that lies in the northern Khmer region or the northeastern part of Thailand. It is near the Cambodian border, especially at its southeastern part, which kisses the border of Oddar Moncheay, Cambodia. To avoid any confusion, this article will feature the province as a whole.

While the town is a friendly place, it does still have a rural, agricultural vibe to it. Its tourist areas have also not been as developed. The province, on the other hand, holds a good number of Thailand’s must-see Khmer relics, such as Phanom Rung.

So, without further ado, here’s a list of the top 7 places to visit in Buriram province: 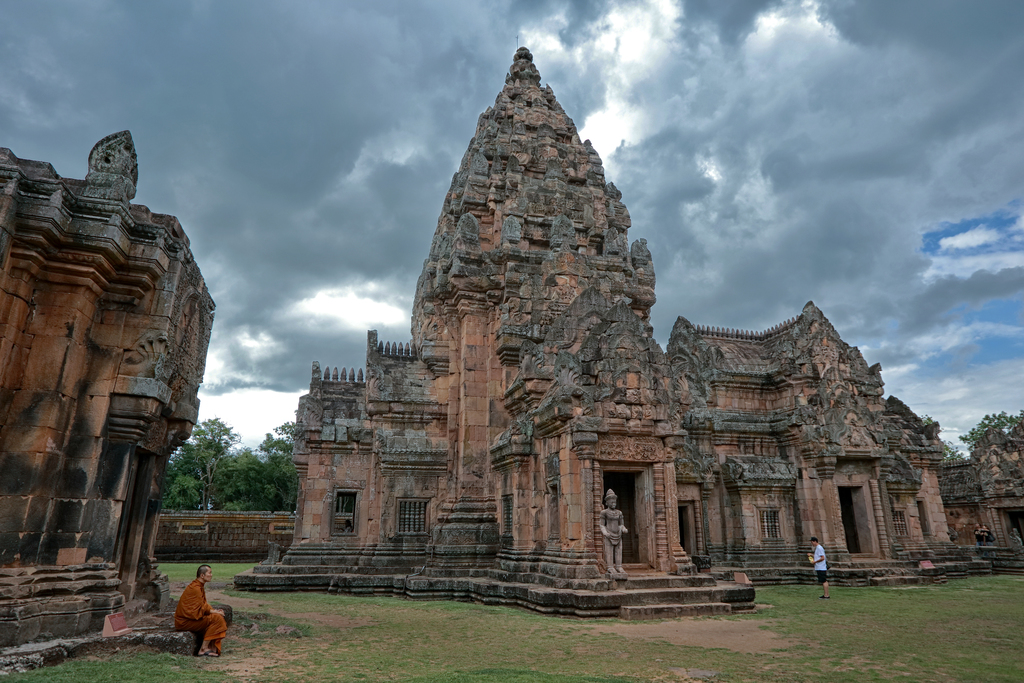 Comparable to the grandeur of Angkor What, Phanom Rung is the largest and best-restored Khmer monument, in Thailand. Even more impressive is that it sits on top of a dormant volcano, about 200 meters (656.2 feet) above some rice paddies. The temples are dedicated to the Hindu god, Shiva and are meant to symbolize his heavenly dwelling, Mount Kailash. It was built from 1113 to 1150 AD, during the reign of King Suriyavarman II. Four times a year, the sun shines on the 115 sanctuary doorways of Phanom Rung. When this happens, the park extends its hours to celebrate the Phanom Rung Festival, and the solar alignment.

The whole complex is built from sandstone and laterite. Apart from the Phanom Rung Festival, the Royal family of Thailand also use this building for ceremonies. There is a processional walkway, which is actually one of the most picturesque parts of the park. Every part of the park was actually built to symbolize certain connections, such as the connection between heaven and earth, through the stairways. Phanom Rung is now one of the places being considered as a UNESCO World Heritage Site.

2. Get that Instagram-worthy shot at Prasat Muang Tam (from USD 1.0) 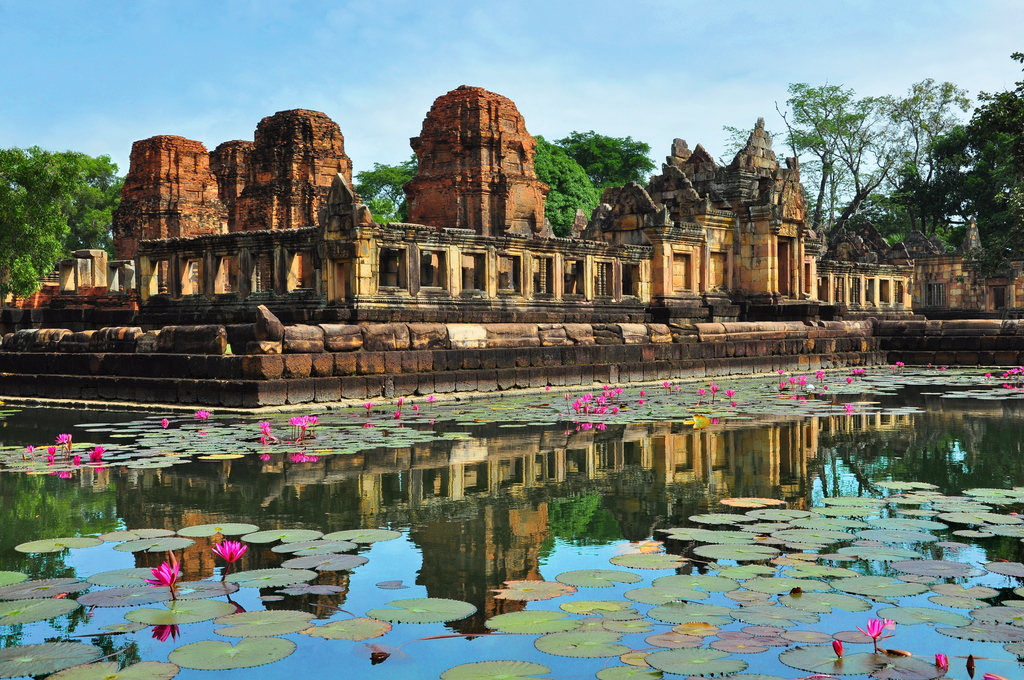 Located near Phanom Rung, Muang Tum Temple or Prasat Hin Muang Tum is another Khmer temple complex that is worth a visit, when in Thailand. Muang Tum is around 1,000 years old and is found at the base of the same dormant volcano that Phanom Rung is in. The temple was built during the 10th and 11th century, around the same time as Phanom Rung, and like its bigger neighbor, it is also dedicated to the Hindu god, Shiva. Inside the temple complex, you’ll find several Instagrammable small ponds, filled with water lilies. Naga snake statues are found at the corner of each pond. Near the temple is a lake called Baray, which is about 1,000 meters (3280.8 feet) long and 500 meters (1640.4 feet) wide. The location of the temple was chosen because it is close to the lake, which symbolizes the ocean that surrounds Mount Meru, representing the center of the universe in Hindu cosmology.

3. Commune with nature at Khao Kradong Forest Park (from USD 1.0) 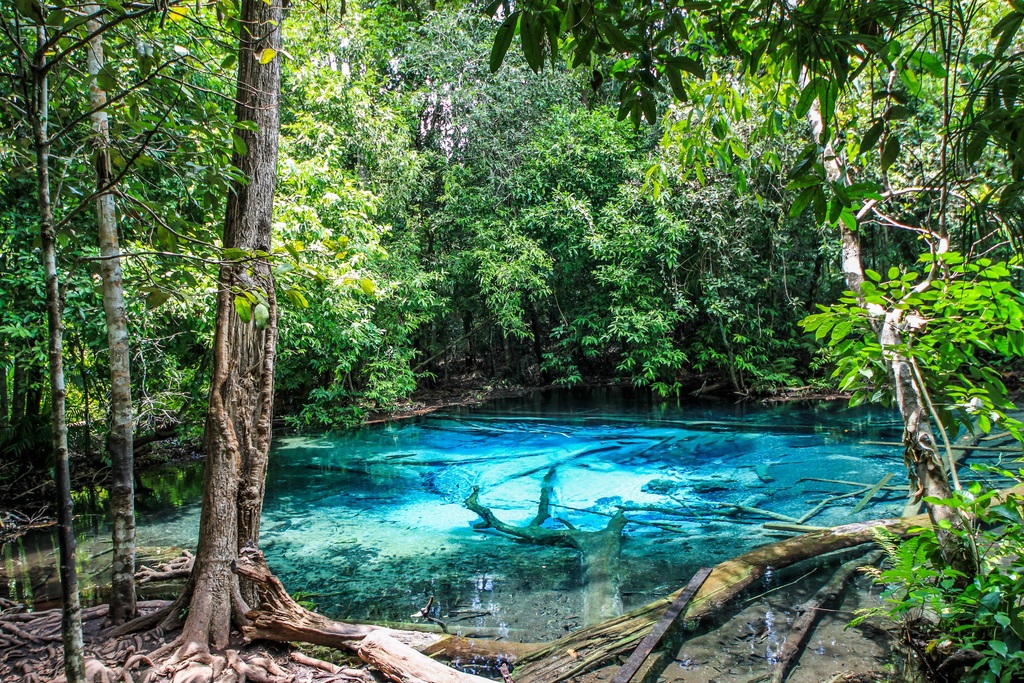 If you’d like to enter the extinct volcano near the Khmer historical complexes, Phanom Rung and Muang Tam, you can enter through Khao Kradong Forest Park, formerly known as Khmer Phanom Kradong, which literally means “turtle shell”. You can explore the crater, which has a deep pool of water, almost all year round. Here, you’ll find interesting flora and fauna, such as the Devil Yoni Tree, which can only be found near volcanic areas.

If you climb to the top, you’ll be met with a large Buddha image called the Phra Suphattharabophit, the symbol of the whole of Buriram. You’ll also find a stupa here, that has a replica of the Buddha’s footprint. 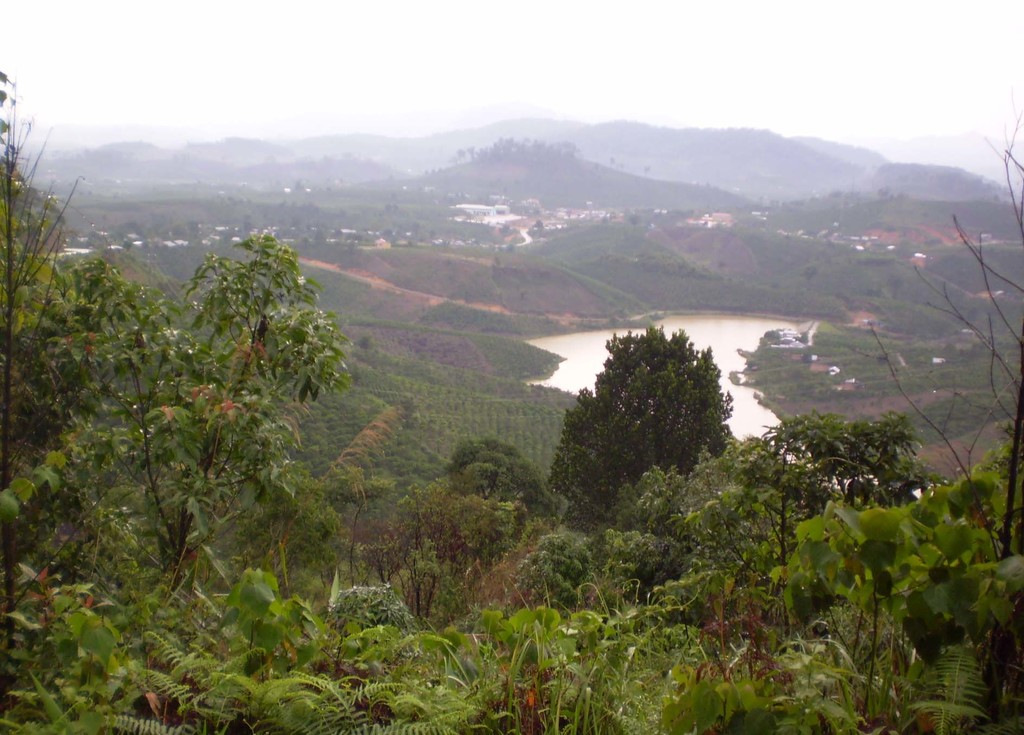 If you haven’t yet had your fill of Khmer ruins, then head on to Nong Hung Sanctuary, which has three brick pagodas built on a laterite base. It has a laterite wall and moat, as well. The sanctuary is near Laem Nang Rong Dam and is about 100 kilometers (62.1 miles) south of Buriram town.

5. Have a fun day out at Wat Khao Angkhan This wat is a combination of old and new. There are Dvaravati sandstone boundary markers that date back to the 8th or 9th century. However, the government has built modern additions that harken back to Khmer architecture. The new buildings were built in 1982 and contain murals by Burmese artists. The wat also has a Chinese-style pagoda, a 29 meter (95.1 foot) reclining Buddha, and a view of the mountains. You’ll have to be adventurous to reach this, though, as this is about 20 kilometers (12.4 feet) from Phanom Rung, and no public transport travels to this area. You’ll have to rely on local directions and a few strategic signposts.

6. Get great bargains at the two Buriram night bazaars While Buriram isn’t particularly famous for its nightlife in the same way as Phuket and Pattaya, you’ll find that you can still make it a fun night at the province’s two night markets. The main night market is on Romburi Road, south of Jira, near the moat and consists of several restaurants, with vendors selling pre-made meals on the streets. The other night market is called Klong Thom and can be found west of Tanee Road. Here, you’ll see interesting things, such as dogs and cats sold as domestic pets.

How to get to Buriram

Flying is the easiest way to reach Buriram. Buriram has a regional airport and is serviced by two airlines, Nok Air and Thai AirAsia coming from Don Mueang International Airport (DMK). You can also use the State Railway of Thailand, the national passenger rail system which goes to the Buriram Railway Station. There are express trains from Bangkok to Buriram. When you’re already in the province, you can use the Buriram Bus system to reach the other provinces. Don’t be surprised also if not everyone in the region doesn’t speak Thai though. Because it’s so near the Cambodian border, some of its citizens speak Lao and Khmer. That said, Buriram is a beautiful multicultural experience. It’s great to see how these three cultures interact with each other and find that, in the end, a subculture comes out that is completely Buriram’s own.