Just an hour away from Bangkok, Suphan Buri or Suphanburi is one of the towns from the province of the same name. The province played an important role during the Ayutthaya period wars. Wander through its streets and it feels like you’re wandering through a historical novel, dating to as far back as 3,800 years ago. There are settlements here that have been dated to belong to the New Stone Age, Bronze Age, and Iron Age.

That said, Suphan Buri is not really quite as developed as bigger cities in Thailand, opting instead to focus on agriculture with its close proximity to the Suphan River and its low-lying and flat lands. It still has that charming rural feel with lots of cottage industries and natural waterfalls, lakes, forests and indigenous tribes. Lately, it has also been building a lot of tourist spots such as parks and shrines to draw in more tourists to Central Thailand.

If you happen to venture out of Bangkok, here are a couple of things to see in Suphan Buri:

Because it bares the royal insignia of King Rama V, Wat Pe Lelai Worawiharn is officially considered a royal temple. It was founded by the same king at the time when he was still a monk and was responsible for the founding of many temples including Wat Pa Lela Worawiharn. The temple is found on the banks of the Tha Chi River. And even if you’re not religious, the majestic image of Luang Pho To, reaching a height of 23.46 meters (76.7 feet), is enough to draw you in. You will also see him in a European posture, receiving offerings from an elephant and monkey. Apart from this sculpture, you’ll also see 36 other Buddha relics in the temple. At the back of the wihan, you can also find a traditional Thai House on stilts and teak wood, complete with traditional Thai ceramic and furniture. If you’re finding it difficult to locate this temple, just ask directions and refer to it as “Wat Pa,” which translates to Temple of Forest on Melai Maen Road.

2. See the whole of Suphan Buri at Banharn Jamsai Tower

This tower is considered to be the highest viewpoint tower in Thailand. It overlooks Chaloem Phatthara Rachini Park which is usually crowded with tourists. So, if you’re looking to escape the crowd, then head on to the tower. It gives you an excellent view of Suphan Buri at 123.25 meters (404.3 feet). Apart from the obvious drawer, the view, you can also check out the souvenir shop on the first floor, a food center on the second floor with a view deck, another souvenir shop on the third and a historical exhibition with a binocular viewpoint on the fourth and last floor. It’s open up to 7:00 in the evening from Tuesdays through Fridays.

Dragon Descendants is one of the newer attractions in Suphan Buri. It’s an intimidating structure that houses different artifacts and heirlooms. The exterior looks like a giant dragon made out of fiberglass, looming 135 meters long (442.9 feet) and 35 meters high (114.8 ft.). It is also 18 meters wide (59 ft). The whole structure took two years to build. Inside, visitors go on a journey through 20 rooms, from dynasty to dynasty that spans about 5,000 years, encompassing the whole history of Thailand, up until the time the Thai-Chinese merged and later transitioned to become the people of Thailand. The free guided tour is in Thai though, although they’ll have audio guides in other languages. Apart from the dragon itself, they also have the Celestial Dragon Village just beside the museum which holds several souvenir shops and restaurants.

This temple holds one of the most revered and copied Buddha images in Thailand, the Phra Phuttha Chinnarat. So much history and mystery have shrouded this temple including talk of a white-robed sage who appeared from nowhere to finally complete the final casting of the third sculpture, and then disappeared right after. There were three commissioned pieces overall from sculptures from Si Satchanalai, and two of them were eventually moved to Bangkok. The third and last image eventually became the centerpiece of the sanctuary and was named Chinnarat or Victorious King. The third is also the most striking because of its flame-like halo around the head and the dragon-serpent heads. Wat Phra Si Rattana Mathathat also has a free museum. Be mindful about your things when you go around though. You’ll find that the atmosphere can be quite hectic especially during the afternoons. As it is a temple, be sure you are wearing the appropriate attire.

This has been one of the most worshiped areas in the whole of Suphanburi. The shrine is found in the old city area of Suphanbari along Malai Man Road. This Chinese-looking edifice was originally a Thai pavilion that housed Shiva and Narayana but was renovated during the time of King Rama V. He personally visited Suphanburi and held a sacrificial ceremony in the shrine. After which, he also donated funds to renovate and construct the dam around the shrine. It now also includes a Mahayana Buddhist bas-relief called Bodhisattva Avalokitesvara or the four-armed Narayana with an origin that dates back to 1,500 years. You can also catch the Mahayana festival called Ting Kra Jad every full moon day in the 7th lunar month here. The festival is celebrated by people who want additional merit for the relatives who passed away.

This national park includes Ong Phra Forest, Khao Phu Rakam and Khao Huai Phlu. It is about 80,000 acres (32374.8 hectare) of lush forest with a large variety of flora and fauna, covering the mountain range of Phu Toei with 300-year old giant cycad trees. The park also has a reservoir, campgrounds and a minority village inside it.

Source: Photo by user Heiko S used under CC BY 2.0

This buffalo preservation, as named, holds a water buffalo ranch in its 27-acre (10.9 hectare) property where you can watch half-hour buffalo shows throughout the day. But apart from interacting with them, you can also immerse yourself in farming life. You can help with rice threshing, learn how to heal using traditional Thai medicine from indigenous herbs and even try out Thai massage and Thai astrology.

How to get to Suphan Buri

Suphan Buri has also been known to be the Nashville of Taiwan because it’s an important part of the Thai music industry. It is just 107 kilometers (66.4 miles) from Bangkok. You can drive, take a motorcycle, or commute via Amphoe Bang Bua Thong, the shortest route. There’s a train that leaves Bangkok Station daily at 4:40 p.m. It goes back to Bangkok at 5.00 a.m. 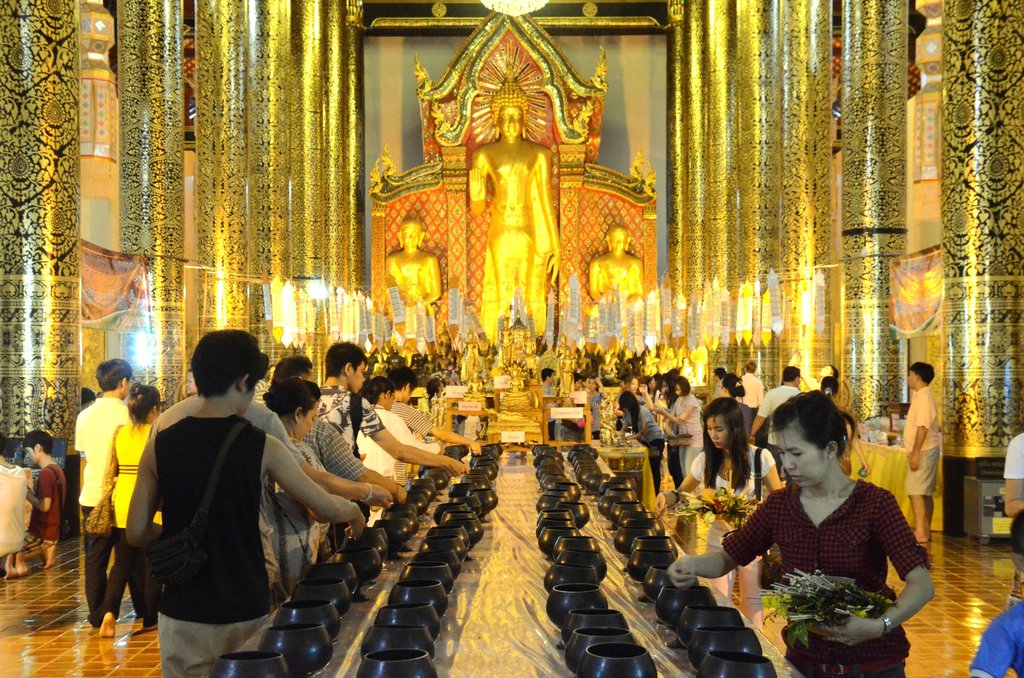