Wynwood - A Crossroad of Culture, Music, & Technology in Miami

Wynwood, a neighborhood in Miami, is located in the Art District. Since 2013, Wynwood has been a growing home for music, arts, and technology. An important characteristic about Wynwood is the importance it gives to local and global artists. This is done by providing a number of galleries and, venues, as well as showcasing weekly, monthly, and annual events to give the artists a chance to display their work. Over the past three years, Wynwood has made a name for itself by drawing in major names in the music and the art world. The III Points festival takes place annually from the 9th - 11th of October. Starting out in 2013, III Points has offered its visitors a variety of artists and genres ranging from indie, experimental, techno, house, and reggae. This year, the festival has brought some major names including: Nicolas Jaar, Bonobo, Totally Enormous Extinct Dinosaurs, Panda Bear, and Martinez Brothers to name a few. The festival and the crowd is definitely nonjudgmental and welcoming; showing the real face of Miami. Besides the big name artists that headline the festival, participation from many local artists is also an important part of the festival as well. Also, during the festival, guests gain access to numerous after parties, including one at Club Basement, which is on Collins Avenue (minutes away from South Beach), inside the Edition Hotel. The hotel has an indoor bowling alley and a skating rink, which will add to your experience.

The combination of art and technology also plays an important role during the course of the festival. Local and international artists are able to set up shop and display their talents. One that drew my attention during the 2015 event was a cage featuring two artists dressed as scientists. The inside of the cage was equipped with laptops running software, midi machines, and speakers. Each year III Points has expanded its vision and have welcomed an increasing number of fans to Miami. Every year, the festival continues to grow and expand its reach. Upon strolling around the Wynwood neighborhood, you’ll see many local eatries including delicious food trucks, breweries, and restaurants. Some of my favorites are Coyo Taco and Phuc Yeah; who have also participated as vendors at the III Points festival. Coyo Taco offers mouth watering Hispanic cuisine including, tacos, burritos, and salads. A really filling meal is the burrito bowl, which has rice, beans, pico de gallo, cheese, and sour cream. For a lighter, quick bite, try the Pollo al Carbon taco, which consists of two tacos with grilled chicken, pico de gallo, and queso. The best thing about Coyo Taco is the low price (6 USD for the tacos and 11 USD for the burrito bowl) for the high quality. Wynwood is also a great destination to visit during the afternoon, during Happy Hour. Restaurants, such as the Butcher Shop, Wynwood Brewing Co., and Wood Tavern, all offer half price drinks and a very chill atmosphere to spend an afternoon, before heading out to nightclubs or returning to your hotel. There are numerous venues to visit around Wynwood as well, such as Bardot, Electric Pickle, and Sidebar, which are known to value local artists, DJs, and producers. Most nights, the venues are free with RSVP prior to midnight; however, during III Points, visitors are able to get tickets that grant them free entry during the weekend of the festival. These three venues play techno, house, deep house, lounge, and experimental music from a variety of artists.

The Wynwood neighborhood has been bringing people of all backgrounds together to emphasize the importance of culture and art. The development of the neighborhood has given it an upscale, yet a warm environment. Upon visiting, I would highly recommend visiting the famous Miami beaches as well, in order to get the full experience of Miam (many beaches are about a 15-20 drive from Wynwood). Miami is a melting pot that opens its arms to people of all sorts, which adds to what makes Miami an ideal destination to visit. 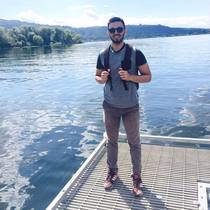 Efe Ulucay - 21 year old Philosophy student, currently living in Seattle, WA. Originally from Istanbul, Turkey. With a passion for not only writing, but also the idea of traveling and discovering...Read more
Want to contribute as a Local Expert?
Register Here
Hotels
Lowest Price Guarantee

Explore Miami
Good things are meant to be shared!