A Guide To Badami Cave Temples

People visit Badami Cave Temples to not only see the temples and their murals, but also the historical architecture and beautiful sandstone structures. It is situated in north Karnataka and does not get enough promotion like other tourist destinations in the country, yet it is swarmed by tourists and locals regularly The cave complex is a UNESCO Heritage Site that was created in the early 6th century and features temples carved out of hill cliffs near the Malaprabha river valley and is regarded as a cradle of temple architecture. The Badami Cave Temples are divided into four, each located on top of another and include a variety of murals and sculptures that depict history, religion, and culture. The four caves are made of soft, red sandstone and are draped in Dravidian and Hindu architecture and styles. For your future visit, here is our guide to Badami Cave Temples. Once you’ve arrived in the city famous for their rock temples, you should definitely check out these things to do. Prepare your strength, energy, and fully charged cameras for a long day of exploring the beautiful UNESCO Heritage Site.

The Badami Cave Temples are famous for their four gorgeous temples that are sculpted on a hill cliff with amazing carved murals, entrances that lead to the main hall, and pillared hallways that connect to a small room with sculptures. Each temple is dedicated to a Hindu god and its appearance is made to represent the god’s characteristics.

The first cave is dedicated to Lord Shiva, and was built in 578 A.D., the earliest among the caves. It was created from red sandstone and contains 40 steps that lead to the entrance and the carving of Lord Shiva’s servants that appear to be holding up the floor. The cave also depicts the god with a carving of dancing Shiva with 18 arms or commonly known as Nataraja.

The second temple is 60 steps above the first and is dedicated to Lord Vishnu. Known to be created between the 6th- and 7th-century, its veranda entrance is pillared along with guardians holding flowers. The cave depicts Vishnu’s Trivikrama form, where the god is known to be measuring the earth with one foot, the sky with another foot, and a third foot resting on Mahabali’s head.

The third cave is regarded by visitors as the best one and the largest in the complex. The 100-feet (30.5 meters) deep temple is dedicated to both Lord Shiva and Vishnu and highlights ceiling paintings and huge columns that provide historical background on the culture of the 6th century. There are murals of the depiction of Shiva and Parvati’s marriage, as well as the four-armed Brahma.

The fourth temple is the only Jain temple in the area, and the latest among the caves having been created between the 7th- and 8th-century, while other features might have been added between the 11th and 12th century. It features the image of Saint Mahavira sitting and a couple more diverse murals that adorn the sanctum.

A 2 km (1.2 mi) travel from the caves is the lovely Badami Fort that gives its visitors a magnificent view of the city and showcases a Chalukyan architecture. The fort houses large granaries, an underground chamber, accessible watchtowers where you can take photos with the view, and other majestic sculptures and carvings. It can be reached by foot from the Badami Cave Temples and can be toured for an hour. 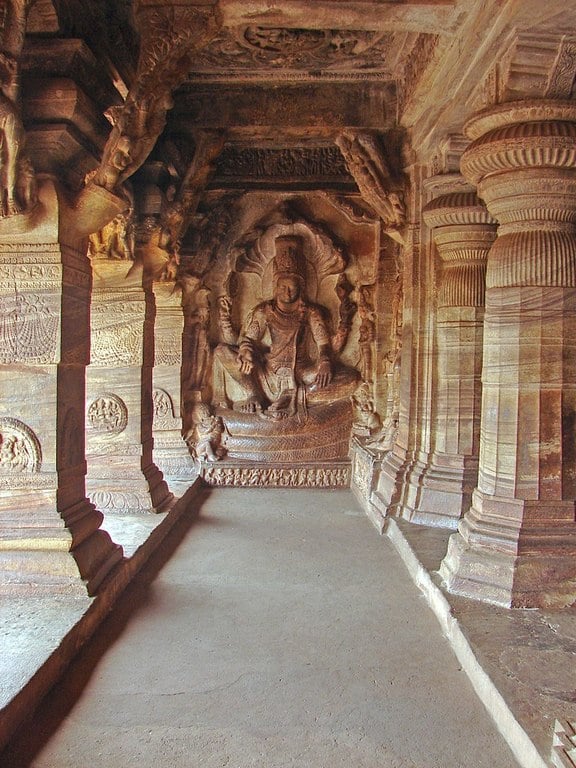 When to visit (by the seasons)

You can visit the caves during summer, winter, and in the monsoon. These three matter when you plan to visit the cave temple as the weather keeps changing.

Summer: The season stretches from April to July, and you’ll be able to witness the blooming of sunflowers near the attraction. The temperature may also rise from 25°C (77°F) to 35°C (95 °F), and its best to go there in the morning to avoid the scorching heat.

Winter: Often regarded by locals and tourists as the best time to visit, the winter season stretches from October to March. The temperatures can drop down to 15°C (59°F). It is the right time to hike up the temples and not worry about the sweat and the heat.

Monsoon: Although there are some rain showers here and there, it is still a good time to visit the attraction in the months of July to September. There is occasional sunshine and the temperature ranges from 21°C (70°F) to 31°C (88°F).

Rules of the temple

Attractions often come with house rules that all visitors must follow, and the Badami Cave Temples are the same. Always keep your voice down whether you’re outside or inside of the temples to avoid echoes and uncomfortable circumstances for other visitors. Some come here to pray, while others come for the scenery. Women are expected to wear clothing that covers their shoulders, while men should wear clothes that cover their knees as a sign of respect for the heritage site. Make sure to walk clockwise along with the crowd to avoid going to further ends of the attraction that will make you lose direction. Take note also that some areas of the attraction are prohibited from photography. You can take a train to Hubli Jn from Chennai Central, which is a 15-hour ride. From there, transfer to trains going to Badami and the ride can take approximately over 2 hours. When you arrive at the station, take a taxi to Badami Cave Temples as it is only 5 km (3 mi) from the station.

From Chennai Bus Station, take a bus to Bangalore which will take around 7 hours. When you arrive in Bangalore, ride another bus going to Badami, which is a 9-hour ride. From the station, you can walk approximately 12 minutes to the attraction.

If you wish to go on a private drive and explore the area as you go, you can rent a car at Chennai International Airport and drive for over 9 hours to get to the Badami Cave Temples. You can get your tickets at the attraction itself. The ticket booth is located near the entrance, by the parking lot. Tickets cost 30 INR (1 USD) for Indians and 500 INR (7 USD) for foreigners. Children below the age of 15 can enter for free with a paying adult. Make sure to plan ahead if you wish to be first in line and see more of the attraction’s area so you can snap some pictures. Expect long queues during the peak hour of 1 pm, so its best to come early.

You can also book tickets from third-party websites that come in packages with optional inclusions. The prices are not far from the ticket costs and may let you save more time and money. Alecs is a coffee-driven, matcha-loving writer and journalist from the Philippines, whose experience roots from business writing to music and pop culture articles. She dreams to be busy travelling...Read more
Want to contribute as a Local Expert?
Register Here
Hotels
Lowest Price Guarantee