Bask in the spirit of Kanazawa’s old town! A walk around Kazuemachi and Higashi Chaya districts

Founded as a castle town by Kaga Domain’s Maeda clan, Kanazawa city possesses a unique culture in arts, craft and food. The city did not suffer damage during the war, therefore many historical buildings and old streets have been preserved. I will not introduce a walking tour around the Kazuemachi and Higashi Chaya districts where you can best feel the typical atmosphere of Kanazawa’s old town! Kazuemachi is located along the banks of Asanogawa, about 10 minutes by car from JR Kanazawa station. When you enter the small streets you will first see Kuboichi Ototsurugigu shrine.

This shrine has a history dating back to Heian period when it was called Ototsurugi Daimyojin. It was built as a guardian shrine of the city. The central market of Kita-Kaga area was located nearby and the actual city developed from that market, therefore the shrine is also known as “the market’s birthplace” or “the city’s birthplace”. It is said to protect the city’s prosperity and development. After you see the shrine, continue further and to the right. The stone steps on the slope behind the shrine lead to Kazuemachi district. This slope is called “Kuragari-zaka” (the dark slope), because in the old times the rich gentlemen from the merchant families used to take the stairs secretly in the dark to go to Kazuemachi teahouse district. At the bottom end you will see a very small street and a district reminiscing of another era. The Kuragari slope not only leads to Kazuemachi geographically, but it also links the present Heisei era with the teahouse district which flourished in the beginning of the Meiji era, thus serving as a time tunnel.

First restoration of a district’s old name in Japan! The origin of Kazuemachi’s name Kazuemachi’s district name comes from Kazue Toda, a prominent historical figure from the Kaga Domain. In 1970 however, the addressing system was changed and the district became part of “Owaricho nichome” neighbourhood. The old name disappeared.

But in 1979 when the city celebrated 90 years since its municipal organization, signs mentioning the old name and its origin started appearing and a local movement to restore the name emerged.

As a result of that initiative, Kazuemachi’s old name was restored in 1999. That was the first such case in the country. Using this precedent, many local towns and districts began their own movements for restoration of their old names. The story presented here tells a lot about Kanazawa people’s appreciation of good old things. When you cross the big bridge over Asanogawa next to Kazuemachi, you will reach Higashi Chaya district known for its Edo period atmosphere.

It is the biggest among Kanazawa’s three teahouse districts (Higashi Chaya, Nishi Chaya and Kazuemachi), and also one of the most popular touristic spots. Many old teahouses with latticed windows called “kimusuko” are lined up from both sides of the stone paved street. Several teahouses built during the Edo period, such as Shima, Kaikaro and Ochaya-bunkakan, are open to the public for a small fee. Shops selling sweets, souvenirs, local gold leaf products, as well as cafés are also popular attractions for domestic and foreign visitors.

The surroundings are nice to see too! Another charm of Higashi Chaya district After exploring the main stone paved street, you can walk around the neighbourhood. The back alleys preserve the old spirit and still accommodate many teahouses and shops for rice, soy sauce or miso.

There are also shops and facilities where you can try gold leaf pasting, as Kanazawa produces over 90% of the gold leaf in Japan. Gold leaf is one of the local traditional crafts there.

The two teahouse districts that I introduced – Kazuemachi and Higashi Chaya – are designated as important traditional architecture preservation areas. Therefore the little streets are not suitable for cars, but are perfect for walking tourists. The streets are flat and easy to walk. Be sure to visit those districts and get a taste of Kanazawa’s old city. 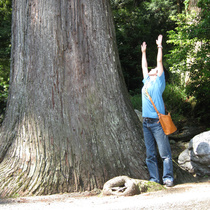