Best Things To Do In Lop Buri, Thailand: A Wonder Of Ruins

Nowhere is history more charming or breathtaking than in Lop Buri. The capital of Lopburi Province is just 150 kilometers (93 miles) north-east of Bangkok and hosts some of the country’s finest ruins, temples, and festivals. Take the time to explore the city, being mindful of the monkeys and traffic, of course, and check off this 10 things to do in Lop Buri checklist!

1. Get lost in Phra Narai Ratchaniwet Also known as the King’s Palace, this beautiful palace complex houses the home of King Narai the Great. It is a ruin that is known as the second capital of the Ayutthaya Kingdom and has a unique mix of Khmer and French influences, making this one of the best sites in Lop Buri for history fans. It’s also easy to find; it’s located in the position of respect, the town centre. The ruins aren’t the only thing to see though; the complex also houses the King Narai National Museum, which hosts personal belongings of past monarchs as well as well-kept grounds, that show how life was like back in the 17th-century.

2. Take time to yourself at Phra Prang Sam Yot Phra Prang Sam Yot is Lop Buri’s oldest and most well-known landmark. Translated from Thai, the name means “three holy prangs” and is a temple with a set of towers located in the middle of the town. It was built by the Khmer King Jayavarman VII and is a historical ruin that absolutely must not be missed if you are in Lop Buri. This 12th-century temple is currently home to thousands of macaque monkeys, so be careful when visiting this site. The monkeys can be aggressive when trying to snatch personal belongings! Keep your items close to you and the town asks that you not feed the monkeys yourself — they have designated officers who do that at certain times of the day. 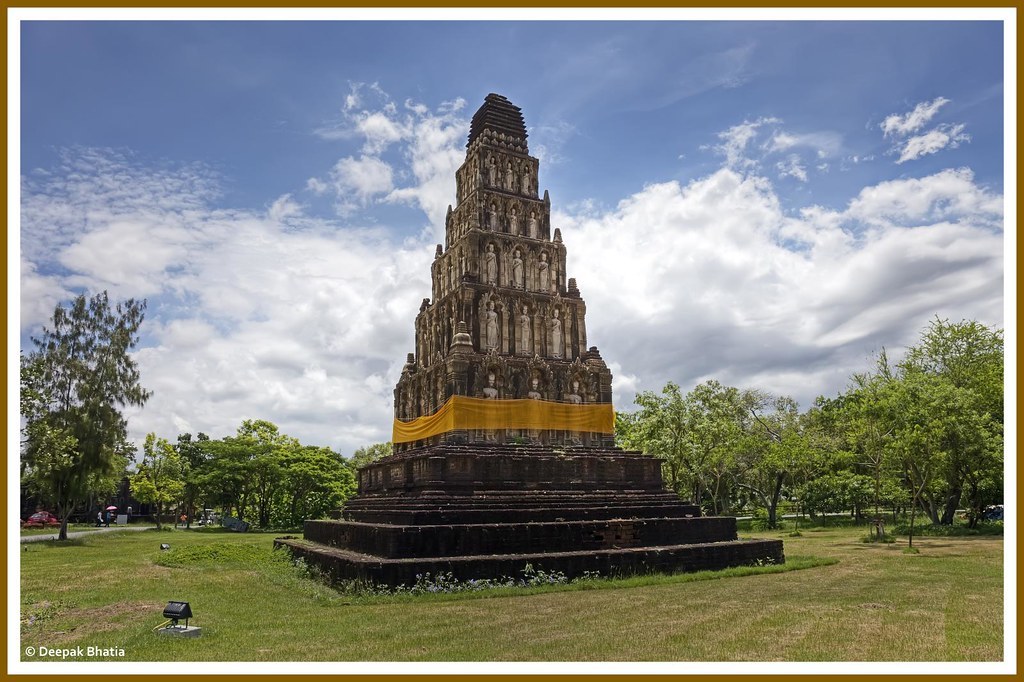 If you’re short on time and want to see as much of the ruins in Lop Buri as possible, try the Lop Buri Heritage Walk. Starting at Phra Narai Rachaniwet in the town centre, make your way through half a dozen sites, most of which are on this list. The whole trip can be done in one day and also features stops for snacks and meals. If you do decide to embark on this walk, remember to bring a hat, your camera, and your wits! Monkeys roam free in Lop Buri and are known for being mischievous, so make sure to keep your belongings close to you. Also, since this is a walking tour, watch out for traffic along the roads! 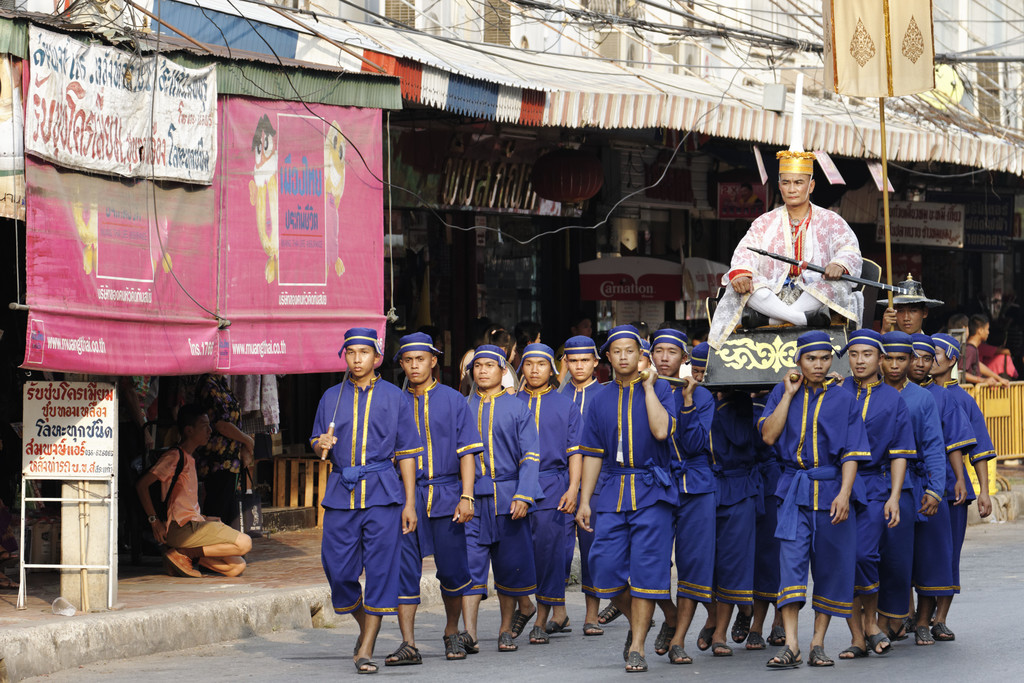 King Narai Fair is held annually in February at the Phra Narai Rachaniwet and is held in honor of the 17th-century monarch, King Narai the Great. It is a festival that is filled with music, period-accurate ceremonies, a market, and an after-dark sound-and-light show. If you’re in Lop Buri during the festival, make sure to drop by and see this Thai event in person!

5. Pay your respects at Ban Wichayen Source: Photo by Wikimedia Commons user used under CC BY 4.0

Ban Wichayen, also known as Wichayen House, served King Narai the Great as housing for envoys and ambassadors in the 17th-century. It gets its name from the Greek official that served the Thai government as a royal minister, who was named Chaophraya Wichayen and given a house on the same estate. These ruins have several buildings, including a two story brick building, a narrow one story building, and a Christian church with both Eastern and Western styles. Come early for a leisurely walk around the site and to capture the best photos of the church and grounds.

6. Play with monkeys at the Monkey Festival 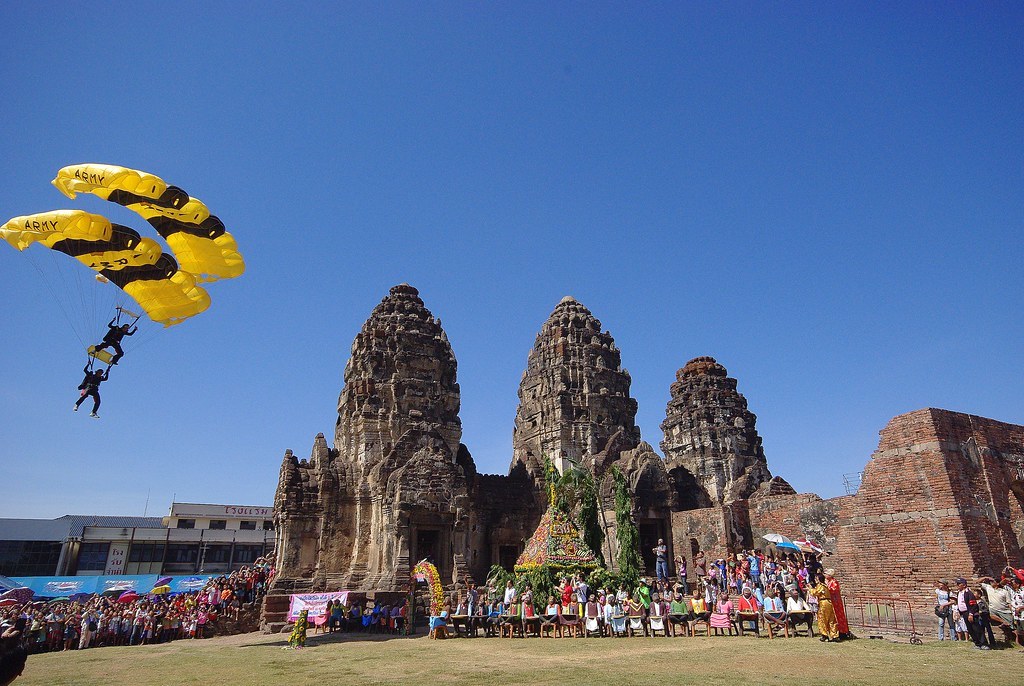 Source: Photo by user Adam Baker used under CC BY 2.0

The Monkey Buffet Festival, held annually in Lop Buri, is one of the city’s most famous events. It is a four-day event in which the city’s 3,000 monkeys are given a bouquet in front of the Phra Prang Sam Yod and San Phra Kan temples four times a day, filled with fruits, vegetables, candies, and cakes. Aside from this customary offering to the monkeys, the festival also offers live music and dancing, as well as vendors that are great for souvenirs. You might want to plan for at least an afternoon here, because this is an annual festival you won’t want to miss if you’re in Lop Buri.

7. Be in awe at Wat Nakhon Kosa Deeper into history is where you will find Wat Nakhon Kosa, a large ruin that is thought to be the base of a 12th-century chedi that was built in the Dvaravati period. These ruins show trace amounts of buildings built during the Khmer and Ayuthaya eras and even has a collection of Buddha images. Come early for spectacular views and a quiet tour around the site.

8. Learn about history at Wat Phra Si Ratana Maha That For a slice of religious history, be sure to take the time to visit Wat Phra Si Ratana Maha That. This temple, known colloquially as Wat Yai, is over 650 years old and holds the second-most famous Buddha in all of Thailand, the Phra Buddha Chinnarat statue; it is also considered the most beautiful statue in the country. There is a lot to see here, with the temple, the ruins, and vendors all over the place, so if you want a calm trip, visit this site before 9 am and make sure to be dressed appropriately. You’ll have fantastic pictures and a head full of wonder after visiting this temple, so make sure it’s on your bucket list!

If you’re interested in traditional Thai architecture from the 17th-century, then a trip to Kraison Siharat Hall is necessary. This was once one of King Narai the Great’s residences and is located on an island that used to be surrounded by a large reservoir. The hall is also important to astronomers; the king utilized the hall and its facilities to observe both a lunar and solar eclipse while in the company of Jesuit priests and French diplomats. The ruins are a little outside of town, meaning that it’s not always packed with tourists, so do yourself a favor and get there early so you have plenty of time to take pictures and enjoy the scenery.

10. Watch the East meets the West at Wat San Paolo Another 17th-century ruin that can be found in Lop Buri is Wat San Paolo, a Jesuit church that was founded by the Portuguese. The ruins include the remains of one brick wall, a tower, and an octagonal, three story observatory. For those who are interested in the trail of foreigners within Thailand, it is a great stop that is a little outside of town, ensuring that this is an attraction that few people visit, making for a calm afternoon in the shade of history.

Opening Hours: daily from 8am - 5pm

History is waiting for you at Lop Buri Regardless of what century or time period you’re interested in — whether it’s Ayutthaya, Khmer, or European — Lop Buri has something of interest for you. If you’re spending time in Bangkok, take a few days to travel to this city and surround yourself in true Thai culture. After all, why else would you go to Thailand if not to immerse yourself in its long trail of history?