The light Mediterranean breeze drifting from the sea, scrubby, dark green coastlines, yachts, and cobblestone streets in Medieval towns capture the beauty and the idiosyncrasies of the French Riviera. The Riviera known in French as the Côte d'Azur, the literal translation being the Coast of Azure, is the Mediterranean coastline of southeastern France. It is a holiday destination and is dotted with towns of immense wealth and elegance. They are some of the most famous in the world such as Monte Carlo (think James Bond), Nice, Cannes, Saint-Raphael, and Saint-Tropez.

If you are planning on traveling to any of these coastal French jewels, you’ll want to know where to eat. The French take much pride in their famed cuisine and below I offer expensive and affordable restaurant recommendations for each of the above mentioned towns. Starting at the most eastern end of the coast, Monte Carlo, and working through to the most western town, Saint-Tropez, let’s go on a food journey through the French Riviera! Source: Photo by user Herry Lawford used under CC BY 2.0

Believe it or not, Monte Carlo is not actually in France. It’s part of the micro-nation, Monaco, on the French Mediterranean coast. Monaco is one of the wealthiest nations in the world per-capita and Monte Carlo shows it. Its luxurious, state of the art buildings and Porsches, Ferraris, Maseratis, and Jaguars line the streets. After all, this is the gambling capital of Europe.

Huit et Demi (pronounced wheat eh de-mi), meaning Eight and a Half, is truly a Mediterranean restaurant. If the fine French delicacies have begun to cloy; and the snails and tongs have become a grisly sight, then head to Huit et Demi where you can enjoy not just French cuisine but Italian as well and dishes from other Mediterranean cultures. The restaurant is also vegetarian friendly for animal lovers.

Ah, there is nothing like eating mussels and watching yachts drift by. That is a typical afternoon at seaside Blue Bay. But Blue Bay is not just any mussel-eating, yacht watching French Riviera restaurant. Run by chef Marcel Ravin, this restaurant has a Michelin star. Chef Ravin serves classic French cuisine from foie gras to whatever your Francophile heart desires! The long pebble beaches of Nice have long attracted European elite and for a reason. With less than half a million people, Nice has beautiful pastel colored buildings and alluring restaurants around every corner.

Right on Rue Bonaparte of Nice itself, you’ll find this dimly lit rustic abode ready for you to get settled in one of their old wooden chairs. Typical French cuisine is served and the restaurant is quite popular among couples. The tagliata de boeuf and the truffle risotto are strongly recommended!

If you are looking for a warm, cosy place to snuggle up in and be served delicious food, look no further. Le Sejour has the ambiance of a corner café shop, yet delivers on the fine cuisine the French are famous for. The molten chocolate cake is recommended, yum! As a lover of film, Cannes always meant one thing for me; the Cannes Film Festival. But after visiting it, I find that the festival is just one of the many things that make Cannes a special place. This resort town has a beautiful boardwalk and a walking path above the beach that runs parallel to the sea. And this is one of the more rich Riviera towns, so don’t be surprised by celebrities or an idling yacht outside your hotel window.

If you are looking for a place to sit down and eat in the sun after a walk around town all morning, look no further. La Meissouniere has outdoor seating and serves traditional French food at an affordable price. You will find great food and great service here. And they are even have many vegetarian options on the menu.

La Mirabelle is quite the opposite of the LA Meissouniere in that instead of eating outside, you feel like you are eating in a cosy cave manned just for your every desire. But be warned, this restaurant costs a pretty penny, but it’s for a reason. A fantastic selection of beautifully arranged food is offered. The steak and truffles are particularly favored among customers. Saint-Raphael may just be the town that provides the greatest contrast between worn cobblestones and old pastel buildings, and the luxury and decadence of the super-wealthy. Here you can wander around centuries old alleyways and come around a corner to find a group of loitering European aristocratic youth, sons of CEOs of multinational corporations. It is a sight to see. Beyond the exotic locale, Saint-Raphael is a lovely place to visit that you would be remiss to skip on your French Riviera sojourn.

If you were guessing that La Marine serves seafood, then your deductive reasoning skills did not fail you. This small, seaside restaurant offers outdoor seating and the chef is known to come out and inquire about everyone’s meals. If you were looking for superb service and seafood, look no further.

Even before you walk through the doors of this delightful Italian restaurant, you know the owners have good taste. After all they named their restaurant after Fellini’s classic, La Dolce Vita. If you are in Saint-Raphael, then this Italian restaurant is a must if you’d like to eat something else rather than French food. Saint-Tropez boasts a thriving artist community and is known for its beaches and nightlife. If you are looking to party, you have arrived! But if you don’t particularly care that yachts outnumber fishing boats in the Vieux Port (Old Port), the old La Ponche quarter offers a view to an older world.

Do you want a good view of Saint Tropez’s crowded port while you eat? Do you want to sit under a canopy and watch the eclectic mix of Tropez residents, European aristocrats, and tourists of all hairstyles, shoe sizes, and skin tones walk by as you eat? And at an affordable price? Then while in Saint Tropez, give your feet a rest and eat at the delicious L'Olive.

Flat, shimmering water, sleek wine glasses, a centerpiece of white flowers, exquisite seafood, and drifting boats. If you decide to treat yourself to the best that Saint-Tropez has to offer, then La Girelier is your restaurant. Class, great service, and an intoxicating atmosphere is what awaits you.

Hidden gems at every stop

No matter your budget, you can indulge at every turn along your journey through the French Riviera, with an array of luxurious, fine dining options all the way too more rustic, local favorites. 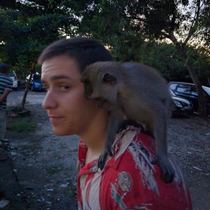 Keyboard Jocking, Globe Trotting, Dostoevsky reading, and Budapest Lovin' writer set out to earn a buck and experience the world while I'm at it too.
Want to contribute as a Local Expert?
Register Here
Hotels
Lowest Price Guarantee

Explore French Riviera
Good things are meant to be shared!