Five Things To Do In The Laidback Seaside Town Of Byron Bay, Australia Tucked away in the northeastern corner of New South Wales, Australia, is this little gem of a seaside town. Named after naval officer John Byron, grandfather of the poet Lord Byron, this town has established itself as an alternative destination to the busier cities of New South Wales and became known for its natural breaks, perfect for longboard surfing. If you’ve been similarly lured by the chill, hippy atmosphere of this town, here are some things to do to make the most of your experience in Byron Bay, Australia.

1. Catch amazing waves at the Wreck and Main Beach

You can’t visit this town and leave without catching some of its world-famous waves! Here, the swells are created by the presence of sandbars, which were in turn created by the shipwreck of the SS Wollongbar, in 1921. If you look closely, you can even see the top of the shipwreck protruding from the water. This area of the beach is more suitable for experienced surfers, as the waves can be significantly rougher and change with little warning.

Novice surfers can check out Main Beach instead – curiously, it has its own shipwreck as well, the Tassie II, believed to have been sunk at the end of World War Two. Main Beach is home to the Byron Bay Surf Club, and enjoys popularity thanks to its decent waves all year round, even when the strong northerly winds are blowing through all the other surf spots. During the summer months, Surf Lifesavers patrol this area as well, so it’s a safe place to learn how to get on the board.

2. Watch one of the world's most beautiful sunrises at Cape Byron Lighthouse

Not a cloud in the sky or a puff of wind this morning. Have a great day everyone.

Being situated on the most easterly point of Australia has one distinct advantage: the town of Byron boasts one of the most beautiful sunrises in the world. Take a slow stroll to Cape Byron Lighthouse with a picnic breakfast (you have the option of driving there as well, if a walk in the early morning darkness isn’t your thing) and watch as the sun rises over the horizon. The panoramic views from that vantage point are spectacular, offering you an unencumbered view of the sunrise, in all its glory. With luck, you might even spot dolphins swimming near Tallows Beach!

3. Immerse yourself in the beauty of marine wildlife

Should have been here yesterday...dolphins having fun in Cape Byron Marine Park, photo taken from the lighthouse.

If you’d like to see marine animals in their natural habitat, don’t miss the opportunity to visit the Cape Byron Marine Park. Spanning approximately 220 square kilometres (85 square miles), the Cape Byron Marine Park is home to several threatened and/or protected species and offers visitors a rare glimpse of sharks, rays, and turtles in their natural habitat.

One way to experience this is, of course, scuba diving or snorkelling. Because the sea here is a unique mix of cooler temperate waters and the warm East Australian Current, you’ll be able to see not only the tropical wildlife found on the Great Barrier Reef, but also other marine animals from Australia’s deep Southern Ocean! We recommend Julian Rocks, which features 19 dive/snorkel sites, the most popular of which are Northern Nursery and the Hugos Trench.

The Marine Park is also an excellent place for dolphin or whale-watching. You can join a boat tour, or even view from land – one of the best spots is the viewing platform at Cape Byron, where you can see the annual humpback whale migration. Wategos and Little Wategos Beaches also have regular dolphin visitors.

4. Paddle in the translucent rock pools of Wategos Beach

One of the most picturesque, family-friendly places in Byron Bay, Wategos Beach is a peaceful stretch of flat golden sand on the northern side of Cape Byron – even the local bottlenose dolphins love this place, and can often be found frolicking in the nearby waters. With its park benches and large BBQ areas, it’s the perfect location for a picnic lunch while the kids paddle in the translucent rock pools.

If you live here, this is also a great place to watch the sunrise without having to climb all the way up to Cape Byron Lighthouse.

5. Take a scenic hike through the Minyon Falls

Minyon Falls in the Nightcap National Park, Northern NSW. Located about half hour from Byron Bay, the falls are surrounded by walking tracks and offer great views of the hinterland.

If you’re ready for some adventure, how about a hike through the rainforest?

The Minyon Falls walking track is a good activity if you have about three or four hours to spare in the afternoon. Nestled in Nightcap National Park, it leads you through about 6 km (3.7 miles) of rainforest, to the majestic waterfall. The rainforest you’ll be passing through is part of the Gondwana Rainforests of Australia, which is a World Heritage Area, and the world’s largest area of subtropical rainforest. Home to a number of threatened species such as the red goshawk, regent bowerbirds and the barred frog, the walk makes for a great educational experience for children, too.

All you’ll need are some sturdy walking shoes, sunscreen, and a bottle of water. The weather is mild in winter months and hotter in summer, but don’t forget to check the forecast before setting off.

A great destination for natural beauty

If you’re looking to escape the bustle of the busier cities, Byron Bay is a haven that’ll give you the refuge you need. The majesty of the natural biodiversity here is something that very few other parts of the world can offer, and it’s a beautiful place to reconnect with nature. Stop over for two or three days if you’re visiting New South Wales – we promise you’ll leave feeling spiritually rejuvenated. 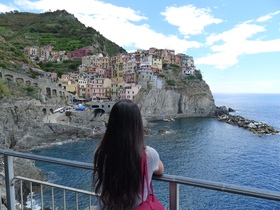 Come along with me as I jump out of a helicopter over the Alps, dive into the sparkling Mediterranean sea, and fight seagulls for my food in Sydney. Of course, I do the more sedate things as well,...Read more
Have a question? Ask fellow travellers and travel experts here.
Want to contribute as a Local Expert?
Register Here
Hotels
Lowest Price Guarantee

Explore Byron Bay
Good things are meant to be shared!