There are many sights to see in Delhi, and it can take up every minute of your stay in the city to try and see them all, even if you didn’t eat or sleep. The city is layered with history, dating back over 5,000 years. Delhi is said to be one of the oldest cities in the world, alongside Varanasi and Jerusalem. Over its history, the city has been destroyed, built up and destroyed again several times, making its landmarks some of the most unique sights in the world.

A smorgasbord of cultures, history and stories converging into one place should make Delhi one of your favourite cities to see in the world. Just ensure that you don’t go there during summertime. The best time to visit is from February to April, and from October to December, when the temperatures dip below 30C (86F) and is bearable. From April to June, the temperatures soar to above 40C (104F), making it scorchingly hot and even with air conditioners running at full-blast, it’s unbearable. Here are five sights in Delhi that you should not miss. One of several UNESCO World Heritage Sites in Delhi, Qutab Minar’s history dates back to the Slave Dynasty which spanned 1206-1290. The gardens that surround the buildings are immaculately manicured which entice locals and foreigners alike to bask in the sunshine for a picnic.

The building itself is open daily from sunrise to sunset and costs 250 INR (approximately 3.50 USD) for foreigners to enter. At one point, this was the tallest skyscraper in the world, but at a mere 72.5m high, it is puny compared to modern-day feats. With intricate carvings detailed into it, it has been well-preserved over the centuries with minimal damage to the exterior or interior. It’s an awe-inspiring sight, making most gasp at its commanding beauty. Source: Photo by user Christopher John ... used under CC BY 2.0

Easily one of Delhi’s top tourist sights, Red Fort tends to get extremely crowded in the evenings, so make sure you go before 12.00pm. Built by the Mughal Emperor Shah Jahan, who also built the world-famous Taj Mahal, Red Fort is a brilliant red sandstone fortress which he occupied as his ruling palace.

It was completed in 1648 but unlike Qutab Minar, the fortress is crumbling as it has not aged well. Thieves have stripped the rooms of all objects, the marble floors have disappeared and most rooms are now off-limits to tourists. The fortress still remains intact though, allowing one the opportunity to walk around it and be in awe of the history behind it.

Tickets are again 250 INR (approximately 3.50 USD) per person for foreigners and is open from sunrise to sunset everyday except public holidays. 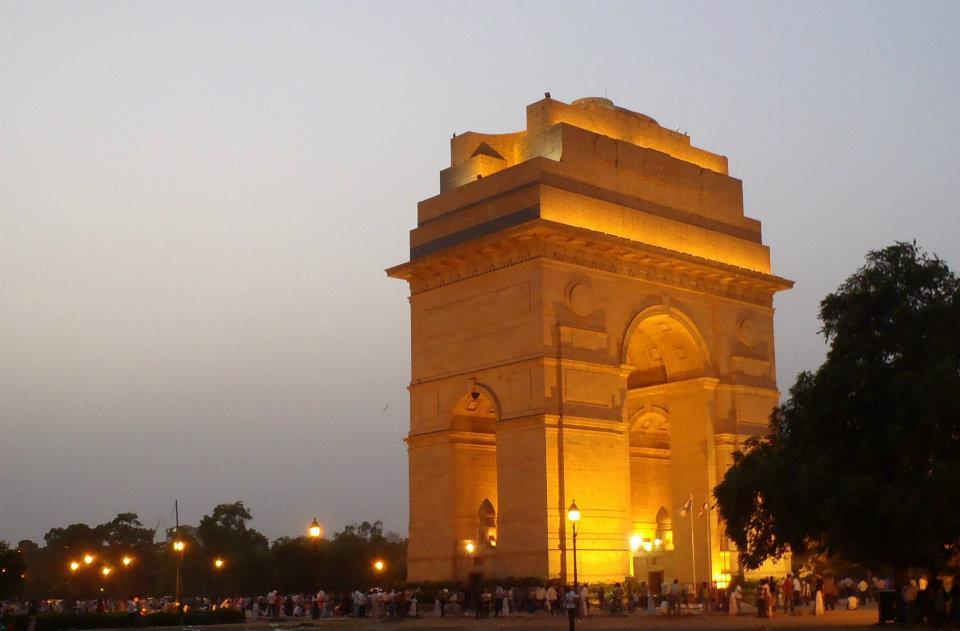 To understand the community in India, one must stroll the gardens of Rajpath outside India Gate in the evenings to fully grasp it. The main route that starts from Rashtrapati Bhavan (the President’s residence), Rajpath leads to India Gate with grassy lawns dotting the pathway on either side. India Gate was built as a monument for the Indian soldiers who died in World War I.

It is also the place where all the locals congregate to celebrate special occasions, such as victory in the Cricket World Cup. One of, if not the, most important landmark in Delhi, India Gate is at once beautiful and inspiring. In the evenings, the buildings and parks are lit, vendors come out to sell their goods and supply picnickers with food, ice-cream and other goods. One can also see the fire, the eternal flame, that burns for all fallen Indian soldiers. Source: Photo by user Arian Zwegers used under CC BY 2.0

Located in South Delhi, this landmark is another UNESCO World Heritage Site. Admission costs the same as entry to Red Fort and Qutab Minar (250 INR or approximately 3.50 USD for foreigners), and it is also open from sunrise to sunset. The gardens are again immaculately maintained and are considered the best in Delhi, surpassing both Qutab Minar and India Gate. The centrepiece of this heritage site is the tomb of Humayun, the second Mughal emperor (1530-1556). Made out of red sandstone, and built by Humayun’s wife, it was the first Mughal structure in the city. One of the largest mosques in India and the world, Jama Masjid was built by Mughal Emperor Shah Jahan - of Red Fort and Taj Mahal fame. The courtyard can accommodate more than 25,000 people with three massive gates filtering the crowd in and out. Four towers constructed from red sandstone and white marble surround you as three domes sit high atop the terrace overlooking everything and everyone. To be awestruck by the experience and the majestic sight, go during evening prayer time while the sun sets. Note: foreigners are not allowed inside the mosque during prayer time.

Immerse yourself in Delhi’s rich history

Delhi is a lot of things, from raging, chaotic metropolis to a food lover’s delight, but its historical significance is world renowned. Each landmark tells its own story and one can weave Delhi’s historical tale through these landmarks themselves. There may be more landmarks than the ones mentioned above, but these are the ones so famous that even locals who are Delhi born and bred flock to them in their free time. These sights are much more than just historical and cultural landmarks; they’re the representation of Delhi itself.