Television provides a window to the world, allowing us a glimpse of wonderful destinations we might never have known about otherwise. This is especially true for popular Korean dramas, which have given a huge tourism boost to many places previously relatively under the radar. Even if you are not a fan of Korean dramas, some of the filming locations are so stunning, they just beg to be visited. We really have the power of television to thank for unearthing such gems and bringing them to the attention of the world. 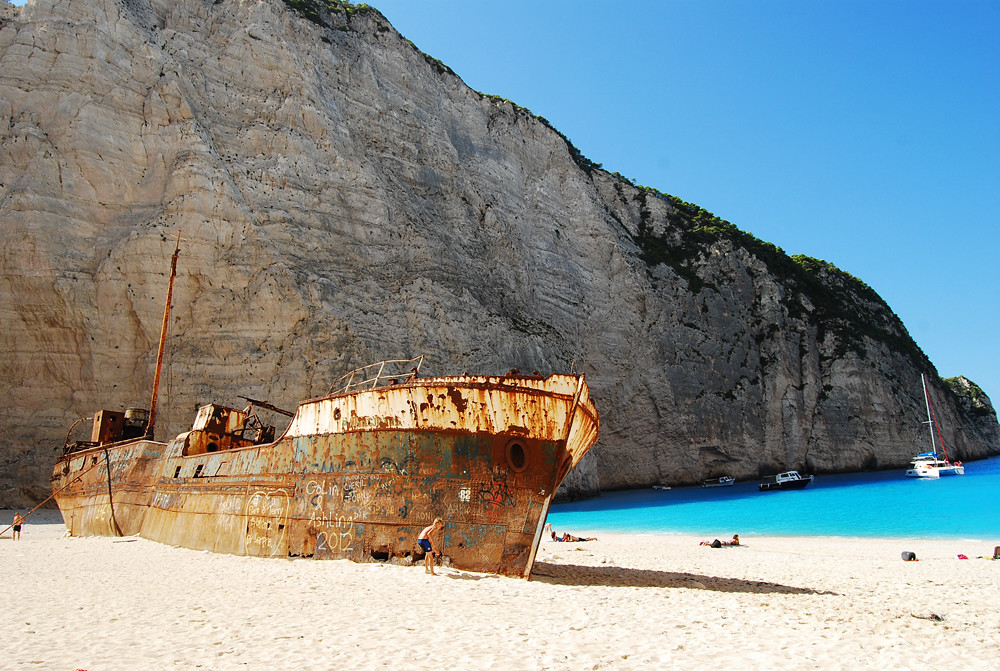 Source: Photo by user monica renata used under CC BY 2.0

The latest Korean drama that has swept across the world in a streak of blazing popularity is none other than Descendants of the Sun. Besides the shining good looks of the lead actors and actresses, the places in which some of the drama’s most beautiful moments were filmed at glittering jewels in their own right. This secluded cove can only be accessed by sea or by base-jumping from the cliffs surrounding it. Surrounded by crystal clear waters in shimmering shades of blues and turquoise, towering cliffs, brilliant white sand, and a shipwreck in the background, this certainly is the perfect setting to be romanced.

The story behind the shipwreck isn’t so romantic, however. Suspected of carrying contraband cigarettes, it hit some rocks while being chased by the Greek Navy and sank. It was then washed up eventually on the shores of Navagio Beach.

Porto Vromi is the nearest departure point to catch a boat to the cove, which is about a 20-minute ride.

94 reviews
Oops, this activity is currently unavailable. Check out these alternative activities in the same location.

The mountain resort town of Arachova is a popular winter destination among Athenians as it is located close to Athens. The town provided the urban setting for Descendants of the Sun in the fictional country of Uruk, and fans will recognise certain places that appeared in the drama. Arachova is also one of the nearest towns to Parnassos Ski Resort, the biggest downhill ski resort in Greece, which will be sure to thrill and delight all ski-lovers. Besides winter activities, spare some time to explore the picturesque village with its red roofs, and you might come away with some surprising finds, such as a bottle of the local wine, Mavroudi, or some colourful woven rugs. 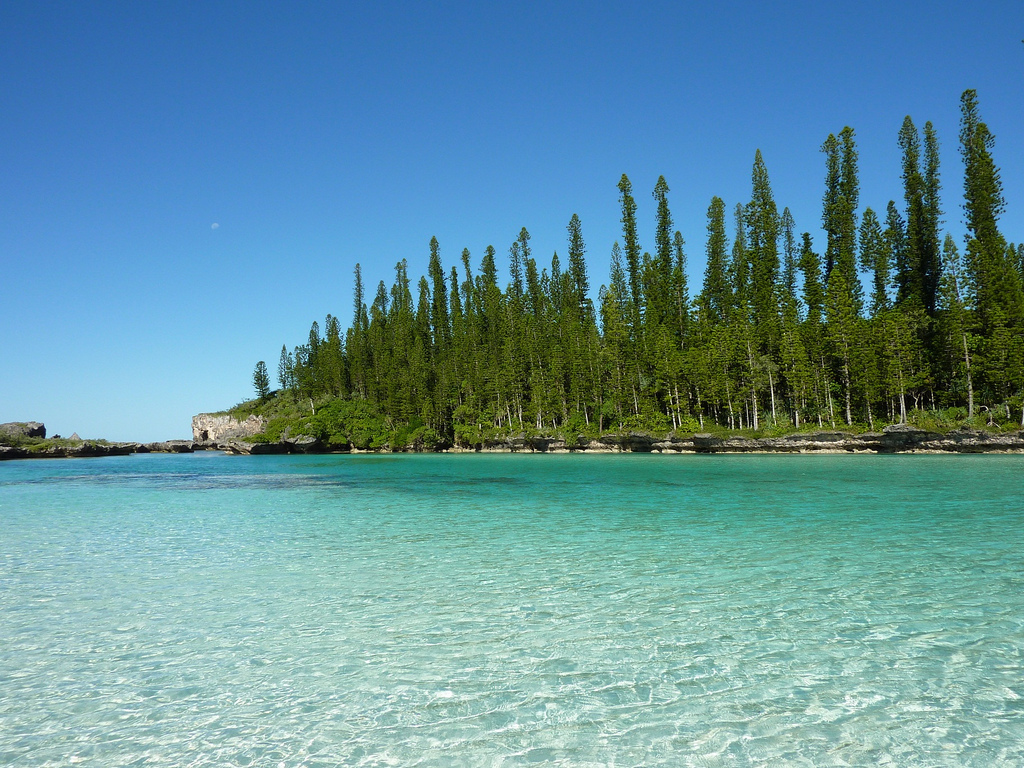 Source: Photo by Wikimedia Commons user my LifeShow used under CC BY 2.0

Who can’t stop humming Almost Paradise? Back in 2009, the hit drama of the year was Boys Over Flowers, starring Lee Min Ho and Goo Hye-Sun. The drama sparked a wave of frenzy over everything and anything related to it. The idyllic vacation island that the cast travelled to was none other than New Caledonia! Just a 3-hour flight from Australia, New Caledonia is a lovely island getaway that has a decidedly European atmosphere. This isn’t really too surprising though as it is a French territory. Lounge in the cafes lining the pavements in its capital of Noumea, bask in the warm sunshine on one of its many pristine beaches, or go swimming in the lovely blue waters of the Pacific. There are plenty of sightseeing opportunities and water activities to keep you occupied and delighted during your stay. You don’t need the company of 4 handsome guys to enjoy your time in this little slice of paradise, though it might certainly be welcome!. The whimsical French cultural village of Petite France in South Korea is a theme park dedicated to the Little Prince. It contains a memorial hall dedicated to Antoine de Saint-Exupery, the author of the celebrated French novel, Le Petit Prince. It also houses a youth training facility. This picturesque site has been the setting for quite a few Korean dramas, such as Beethoven Virus and Secret Garden, but perhaps the most famous one recently is You Who Came From The Stars. The charming Petite France, where Do Min Joon kissed Cheon Song Yi, exudes a romantic French charm and is a great place to take photos against the colourful background of houses. The village consists of 16 French-style buildings where visitors can stay, dine on French food, go shopping, and experience French household culture. It offers a nice relaxing change of scenery from the bustle of Seoul, and the chance to relive some of your favourite moments from the drama. Cheong San Do is a scenic island, covered in green barley fields with traditional stone walls surrounding the fields. It was used as the fictional hometown (Hyangri-do) of the main leads in the drama Pinocchio. Cheong San Do benefits from a seaside location, and harvests a variety of fresh seafood from its surrounding waters. Here, visitors get a glimpse of traditional Korean countryside life, where many things are still done the way they were decades ago. This under-the-radar island is perfect for those looking for a peaceful getaway from modern Korean life.

Visitors can take a ferry from Wando Island to get to Cheong San Do Island. 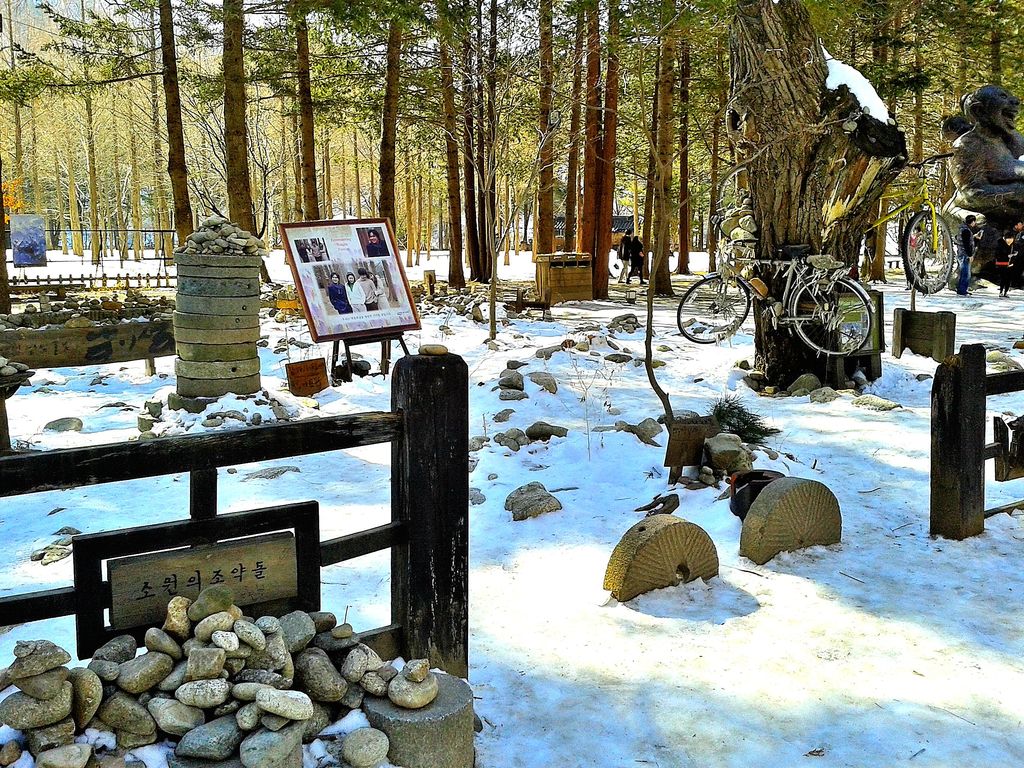 How could we possibly leave out this classic destination: the famed filming location for Winter Sonata, arguably one of the pioneer dramas that started the Korean wave of popularity due to its explosive appeal overseas. The half-moon-shaped isle is lovely through the seasons. It is lush during the summer, an explosion of golds and reds in autumn, vibrant in spring, and dazzlingly white in winter. It is no wonder that so many people were drawn to its beauty after seeing it in the drama. The serene redwood tree-lined road is one of the iconic places on the isle and makes for a superb photo. For fans of the Korean dramas, visiting these places will allow you to relive your favourite moments from the shows and walk in the footsteps of the actors and actresses. Even if you have never watched a single Korean drama in your life, these are still splendid places to explore and create wonderful memories. 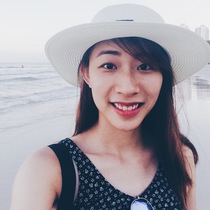 Eunice became hooked on travelling 2 years ago when she embarked on a student exchange programme in Stuttgart, Germany. Among the many places she’s visited, Europe has captured (most of) her heart...Read more
Want to contribute as a Local Expert?
Register Here
Hotels
Lowest Price Guarantee