The City of Bristol is a bustling metropolis home to some of England’s best independent bars and restaurants. The thriving arts and music scene makes it hard to pull yourself away. Should you want to explore a little further a field the South West of England has plenty to offer. There are a number of impressive historical and geographical landmarks that fall within an hour’s drive of the city center, perfect for a day trip away from the city. 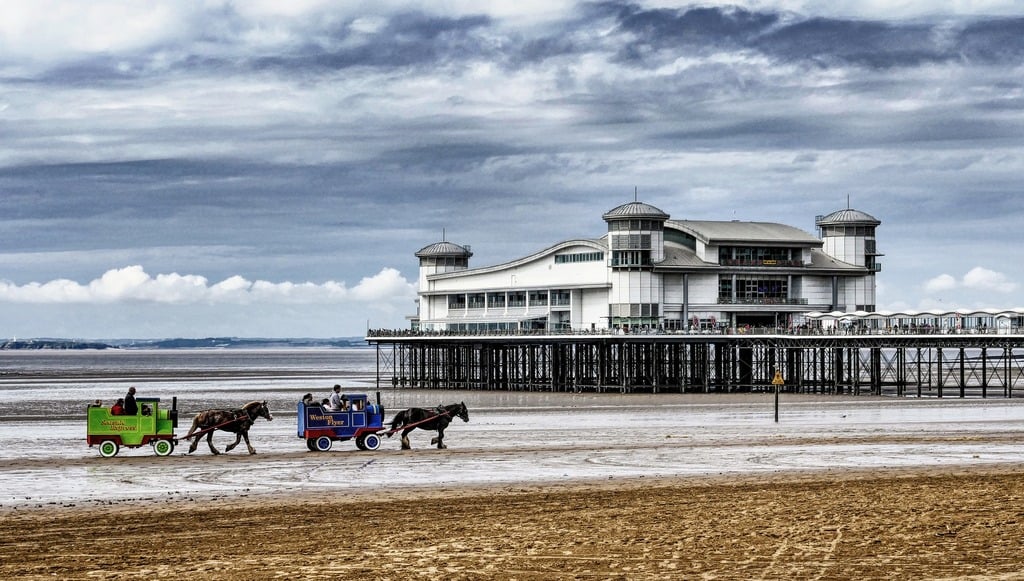 A 28 kilometer drive away from cosmopolitan Bristol lies the sea side town of Weston-Super-Mare.

As the River Severn reaches the sea Weston-Super-Mare lies in wait. A year round treat for all the family Weston-Super-Mare boasts a traditional amusement pier and fair ground. Get your two pence pieces at the ready, it’s very easy to lose an afternoon playing on the slot machines!

The sandy beach welcomes visitors from all over the world and is perfect for creating sand castles! In fact, every year Weston-Super-Mare welcomes world-class sand sculptures to create masterpieces on the beach-front for all to marvel at. The exhibition runs from April to September every year.

Pony trekking from Weston-Super-Mare is a popular choice for many visitors too. Check out the day tour below; Stonehenge is one of the United Kingdom’s most iconic landmarks, it has been attracting visitors from the four corners of the globe for decades; Stonehenge is an integral part of English heritage that is not to be missed.

Now recognized as a World Heritage Site, the first monuments of Stonehenge are said to have been constructed 5,000 years ago. The site is much bigger than many initially imagine, spanning across multiple Bronze Age burial sites.

Pagans and Druids partake in an annual pilgrimage to Stonehenge for the Summer and Winter Solstices. The site has great significance to those who are of the Pagan faith and many join in circle as the sun rises on the solstice day. The stones are believed to have been an astronomical calculator and on Summer Solstice the Altar Stone, the Heel Stone and the rising sun all align.

Revelers join together to celebrate and worship the rising sun.

The Roman Spas of Bath are the city’s most iconic and historic landmarks.

The complex is segregated into four main areas; Roman Bath House and Museum, the Roman Temple and the Sacred Spring. Along with the Grand Bath House, the complex sees over one million people visit each year.

Although visitors are not permitted to bath in the spa pools they are given the opportunity to taste the mineral rich water. Research shows that there are a staggering 43 different minerals and elements found in the water! Certainly worth a try! Away from the hustle and bustle of busy Bristol is the relative sanctuary of Westonbirt Arboretum. Whatever the season and whatever the weather, Westonbirt’s tree lined avenues and gardens blooming with wildflowers provide an opportunity to embrace nature and be at one with the world once more.

The Treetop Walkway is an adventure in itself. Scale to the tree canopy, walk among the leaves and take in the glorious bird-eye view of the Arboretum. Expand your knowledge of nature at one of the seven interactive zones, home 15,000 plant species the walkway is the perfect place to learn and explore.

Without a doubt one of the South West’s most iconic geographical landmarks, Cheddar Gorge provides a breathtaking vista that is certainly worth a visit while in the Bristol area.

Delve beneath the surface of Cheddar Gorge to explore Gough’s Cave. The 500,000 year old cavern is still used to mature Cheddar cheese! This truly authentic Cheddar cheese simply must be sampled to be believed!

As an Area of Outstanding Natural Beauty the gorge and caves are now protected heritage sites, left untouched except for the tasteful lighting that illuminates the stalactites and stalagmites bringing the caves to life before you very eyes. Opt for a guided audio tour and learn about how the cave was used during the Stone Age and into the Victorian Era in this engaging and interactive experience. Want to walk beside paths where dinosaurs once roamed? Visit the Jurassic Coast in the Isle of Purbeck. The Isle of Purbeck is a sixty square mile chunk of land bordered by water on three sides. It’s over 2.5 hours away from Bristol. Jurassic Coast is England’s first and only natural UNESCO World Heritage site. It gives a unique glimpse into 185 million years of the Earth’s history, with fossils of more than 100 different species. There are dinosaur tracks in the Purbeck limestones, with the most notable ones located in Keat’s Quarry. The footprints there are more than a metre in diameter.

Just 37 kilometers east of Bristol lies the infamous town of Glastonbury. The small town made it’s international name in 1970 when local farmer Micheal Eavis hosted Glastonbury Festival of Performing Arts on Worthy Farm, which now attracts over 170,000 attendees each year.

The striking Glastonbury Tor stands tall and proud over the relative flat lands of the Somerset Levels. The turret rises 158 meters into the skies above and reveals outstanding views of Wells, to the east, Mendip and the Bristol Channel below.

The town itself features a multitude of independent food, beverage and handmade crafts shops for you to explore. The South-West of England is home to some of the most innovative homemade, organic and ethically sourced products in the country; from cider to lavender, from cheese to willow crafts you won’t go home empty handed! Bristol is conveniently close to the Welsh boarder and in turn the Cistercian abbey of Tintern. Less than an hours drive, over the Old Severn Bridge, sees you arrive at the dramatic monastic ruins. Dating back to 1131, Tintern Abbey was created by Walter de Clare, Lord of Chepstow.

Between 1536 and 1541 King Henry VIII closed all down monasteries and other religious sanctuaries causing Tintern Abbey to fall into ruin.

Tintern Abbey has been the subject of poetry and paintings for hundreds of years, most notably in the work of William Wordsworth and Jane Austen.

In the county of Wiltshire, about 3 miles south of the town of Chippenham is a beautiful village known as Lacock. This southern English village attracts many visitors because the charming structures and roads, which make tourists feel like they traveled back in time to the 14th century. Furthermore, it is a popular filming location for numerous movies and television series. The historic Lacock Abbey, around which the village was built, is worth a visit as well. The mysterious stone circle of Avebury, also the largest man-made stone circle in Europe, is also situated nearby. Lacock is just over 40 minutes away from Bristol, which makes it perfect for a day tour.

Time to escape the city...

Whether you’re looking for tranquil sanctuary surrounded by nature or to delve into the realms of yester year these day trips from Bristol certainly offer the best of the west!