Top 10 Things To Do In & Around Faro, Portugal

Despite being the capital of southern Portugal’s Algarve region, Faro is an underrated resort city that most visitors to the country miss. As a matter of fact, the city has more than it takes to make it enjoyable for a fun holiday: an attractive marina, well-maintained parks and plazas, a historic old town full of pedestrian lanes and outdoor cafes, a buzzing nightlife, and a strong theater scene. Visitors can enjoy sightseeing from the city’s neoclassical Arco da Vila, the Faro Cathedral, and the Municipal Museum around the marvellously preserved medieval town’s quarters or experiencing the lagoons of the Parque Natural da Ria Formosa and nearby beaches and islands. Tourists will be drawn to the city’s eclectic variety of attractions. All that and it’s easily accessible by a variety of transport. After this article describes the top 10 things to do in Faro, you’ll have no excuse to miss this surprising town during your next trip to Portugal. If you’re looking for a walk back in time in an authentic area, Cidade Velha (the Old City), a well-preserved section of Faro near the harbor with beautiful 18th century Portuguese and Moorish-influenced architecture, is definitely the place you need to go. Walking through the long and colorful past of the city, you’ll enjoy discovering the settlement of the prehistoric old city of Faro and the remains of its Roman and Moorish occupation. Divided into two main areas, the Vila-Adentro, the oldest part; and the Mouraria, the Moorish area, the Cidade Velha is a delightful mixture of Moorish remains and eighteenth-century Portuguese Baroque, Gothic, and other architectural styles and you’ll gaze at the Arco da Vila, Arco do Repouso, Arco da Porta Nova, and many other sites of great interest. Damaged and reconstructed several times during its history due to a combination of natural disasters and planned strategic attacks, walking through these streets is a walk through the rich past of the city and its country. The Cidade Velha of Faro is one of the most historically rich places of the whole region; it is an unmissable! Consecrated in the late 13th century, the Sé Cathedral of Faro is a Roman Catholic cathedral and one of the greatest historic sites of the city. It features statues and carvings illustrating 17th and 18th-century art collections making it one of the biggest found in the Algarve. It is possible for visitors to ascend the cathedral tower, a climb well worth doing as the summit offers breathtaking views over Portugal’s “southern capital”. This is a great walk to discover the richness of the mixed art and religious history of the country.

Vassilya Room! Sand is 2 Steps away Faro Archaeological Museum, also known as the Municipal Museum or Museu Municipal de Faro, was the second museum to be created in the Algarve around 1890. Consequently, The museum’s five long-standing archaeological exhibitions are some of the most significant in the region, with artefacts from pre-historic, Roman, and medieval periods including tombstones, mosaics, and other pieces found in the region, a collection of epigraphs from Ossonoba, high quality paintings from the 16th to 19th century mostly from Italy, and also 20th century paintings. This vast, rich museum reflects the origins and history of Faro, from the prehistoric to the medieval, including Moorish, until nowadays. Known for its small chapel built out of the skulls and bones of monks, the Igreja do Carmo is an 18th-century Catholic church featuring a Baroque façade and twin bell towers. Although the place has much more to offer, one of the biggest draws for visitors is the rather macabre Capela dos Ossos (Chapel of Bones) covered with skulls and bones of over 1,000 Carmelite monks. Inaugurated in the 60’s, the Regional Ethnographic Museum of Faro features paintings, artefacts, crafts, and furniture coming from all over the region. This museum is a great testimony and archive of the area’s rich history that you’ll discover through interesting representations (paintings and photographs), a vast collection of around 700 typical objects (fishing, agricultural, craft work, and domestic industries), and information about the region across the ages. Located on the western border of the Ria Formosa, stretching from Ancão Beach near the world famous Quinta do Lago golf resort, the Ilha de Faro (or Península do Ancão) protects the lagoon system of this unique natural and cultural landscape against the rough Atlantic Ocean. Known as Faro Island, the unique landscape with its dunes, lagoons, and salt marshes is reachable by a wooden pedestrian bridge leading to the beach of Quinta do Lago. While the western part is mostly inhabited by fishermen, the eastern side features an extensive and very popular beach (Praia da Ilha de Faro) with several restaurants, sports, and leisure facilities. If you’re looking for water sports and leisure activities in a mesmerizing area just a few steps away from the ocean, this is the place you have to go. Source: Photo by Flickr user Natalia used under CC BY 2.0

The Ria Formosa Natural Park, with its turquoise lagoon, golden sandbanks, and varied bird and animal life, is a diverse area of Faro. This is a place of great interest for visitors and travelers looking for a leisurely walk in a natural area at the edge of the mighty Pacific Ocean and Europe. Borrow a pair of binoculars and set off along the Algarve coast, for a dolphin watching boat ride. During this three-hour journey, your skipper will navigate through a maze of canals, marshes and barrier-islands of Ria Formosa and Santa Maria Cape. Spot their black fins circling around the boat and watch them leap out of the flat sea, dipping and diving between the waves. Up close, it is the lightest shade of blue with a darker patch of colour on its belly. Nonetheless, do not be too disappointed if there were no dolphin sightings as it may require a tad bit of good luck.

Dolphin watching on the Algarve Coast

9. Tandem paramotor flight in the Algarve, near Loulé Kick on the motors and soon you will be gliding over the southern coast of Algarve. Stretching out before you, as the paraglider skims along the bay, is the view of the jagged coastline and sunshine sparkling on the Atlantic Ocean. Catch the wind currents and head inland towards Loulé, which offers a 360-degree panorama of a quaint, bustling Moorish market and the remnants of Fora’s medieval castles; best appreciated from above.

Tandem paramotor flight in the Algarve, near Loulé

Starting time: Get in touch with the instructor to arrange the specific meeting point and time. 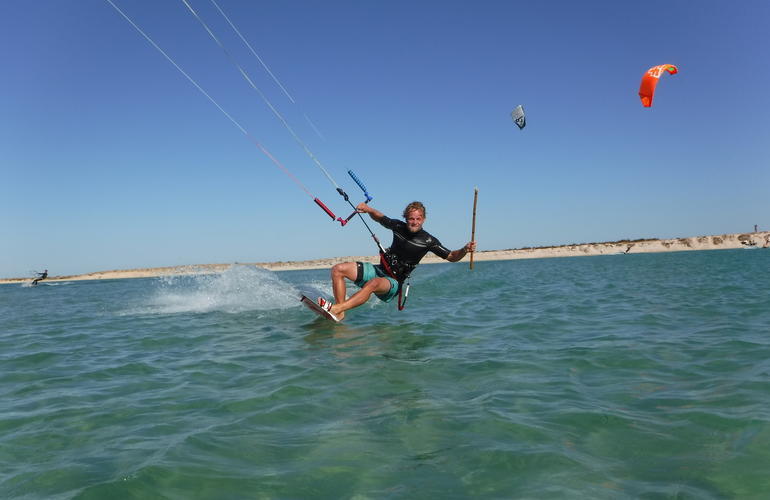 Head out from Fuseta to Ria Formosa and spot the red, blue, green – striped kites soaring over the shallow lagoon; each measuring approximately thirty-feet wide (9 metres). Tied to the flying kites are four wires; clipped onto a harness around the surfers’ waist and surfboard with four fins and twin tips secured at their feet. As the kites catch the wind currents and propel the boards forward, the surfers would skid across the dancing waves, occasionally jumping up to make a wide loop in the air. The strong winds at Ria Formosa, blowing at different intensities, makes the lagoon an ideal place for kitesurfing. So do not hesitate in signing up for kitesurfing lessons and begin your speedy ride along the picturesque coast.

The underrated city of Faro is unfairly overlooked by visitors even though it has a lot of great things to offer. With these 10 top things to do in the area surrounding Algarve’s capital, you won’t have any excuse to miss it! 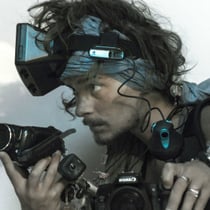 Explore Faro
Good things are meant to be shared!