Chengdu is one of the largest cities in China and is the capital of the popular Sichuan province. Within the city itself, there is much to see and do. It is home to China’s panda breeding research base and in 2011, it was recognised by UNESCO as a city of gastronomy. However, for travellers who shun big cities or have comprehensively explored it, Chengdu also serves as a good base to explore its neighbouring regions within the province. Some areas in Sichuan are picturesque and look like something right out of a fantasy novel. If you can, why limit yourself to Chengdu’s beauty when you can also take in Sichuan’s wonder? If you are up to go beyond borders, then read on to find the top 10 day trips you can take from Chengdu, China.

Mianyang is the second-largest city in Sichuan province. Despite being not too well-known, is actually an important technology centre in the country. It sits in the Chengdu-Chongqing economic zone and is a prosperous city that is still growing. Though it is a bustling city, Mianyang has retained much of the ancient architecture and buildings, such as in Fu Le Shan park, where much of the characteristic Chinese pagodas reside. Mianyang thus possesses a unique identity which blends modernity and antiquity.

Situated on the banks of a river confluence is the world’s largest statue of Buddha. Carved from red bed sandstones during the Tang Dynasty, the statue was listed as a UNESCO world heritage site in 1996. It sits across facing Mt. Emei, one of the four sacred Buddhist mountains in China. Visitors get a sense of China’s religiosity in certain regions of the country, and at the same time, are imbued with a sense of peace and serenity. A tour will take you on an exploratory journey with the history of the statue explained. It will also end off with an indulgence in local cuisine.

Ya'an is Sichuan’s border city with Tibet. As a smaller city away from metropolitan activity, much of the natural and human heritage is preserved in Ya'an. As such, the city possesses a different landscape. The Ya Zhou gallery bridge running across Qingyi river in the town centre retains its historical architecture. What makes Ya'an more interesting is that it is associated with the first discovery of the giant panda, and that the city continues to house more of the pandas in its reserves. Away from the town centre, the Bifeng Canyon offers visitors a peaceful retreat to the lush forests.


Mt Mengding is one of the three famous mountains in Sichuan. Mt Mengding actually consists of five peaks that are alike to a lotus flower, of which the highest peak stands at 1435 metres (4708 feet). Apart from the vista point that grants visitors a beautiful view on a clear day, Mt Mengding also provides fertile soil that is suitable for tea plantations. In fact, Mt Mengdinng is the site where tea was first domesticated, farmed, and harvested by humans. Visitors can drop by these plantations to gain an insight into one of China’s most popular exports that has played a key role in much of global human history.

The Chinese are known for numerous inventions that have changed the course of human history. So, their innovative spirit in history is unsurprising. Get to witness one such ingenuity at Dujiang Yan where the oldest no-dam irrigation system has survived the tide of time. This irrigation system had prevented the Chengdu Plain from flooding when it was conceived over 2000 years ago, and it continues to serve its purpose today. The scenic area is set against the backdrop of Mt. Qingcheng, allowing visitors to marvel at both human ingenuity and the beauty of nature.

One of Sichuan’s most spoken of mountains is Mount Emei, a UNESCO-listed world heritage site. Regarded as one of the four sacred Buddhist mountains in Sichuan, Mount Emei is the highest of all. It takes visitors on a journey through China’s religiosity. At the mountain, you will also get to visit Wannian Temple where religious practices are still observed today. Apart from soaking in the views and tranquillity, Mount Emei is the perfect place to learn about and reflect on the spirituality of nature.

Deyang is the industrial powerhouse of Sichuan, and because of that, it is actually one of the wealthiest. It is unsurprising that the city is where large collections of bronze age artefacts from the Shu dynasty were discovered and are now housed. The Sanxingdui Museum exhibits and records an extensive collection of Shu artefacts. Deyang’s association with China’s history does not end there. It is also where the tomb of Pang Tong, an adviser to Liu Bei, resides. Deyang is the place to go to in Sichuan to gain insight into China’s long history.

Ziyang is a small city, relative to Sichuan’s standards, but it bears an important archaeological significance to the province. The Anyue grotto located near Ziyang is home to an extensive collection of Buddhist and Taoist hand-carvings. These carvings are relics of the Song and Tang Dynasty. While not as popular, the Anyue grotto is linked to the many grottos that reveal the region’s history. Ziyang is also the site where the Ziyang man fossil was unearthed, providing evidence of human presence in the region more than 35,000 years ago.


Chongzhou City offers a vastly different landscape from most of the other major cities in Sichuan. The city is popular for its picturesque scenery, where ancient architecture is nestled amidst luscious greenery. Most importantly, Chonzhou is known as the birthplace of Taoism. Its role in history does not end there. Chongzhou also houses the ancient town of Jiezi, the most well-preserved Chinese towns form the Qing Dynasty. It is also where the Yanhua Reservoir, a geographical relic from the Song and Tang Dynasty, is located. A visit to Chongzhou inevitably becomes a visit to key time periods of history.

Located in the foothill of the Qionglai Mountains, Qionglai is a quaint city neighbouring Ya'an. Founded near the river and surrounded by lakes and mountains, it is no wonder Qionglai City exudes a different ambience. If being around nature is your thing, then Qionglai is the best place to visit. Take a walk through the streets, and you will inevitably end up on a trek through the rolling hills of Jinji valley. Also, visit Mt. Tiantai Scenic Resort to enjoy the refreshing mist cast by the gushing waterfalls. A visit to Qionglai City definitely helps leave the baggage of urban life behind. Visitors are sure to leave feeling rejuvenated.

From Chengdu, through time

Chengdu is Sichuan’s largest city, and it is also the best place to begin your exploration of Sichuan. Much of China’s natural heritage and human history is concentrated in Sichuan. Take a day trip out of Chengdu to the neighbouring cities and explore China’s history, landscape, and culture. 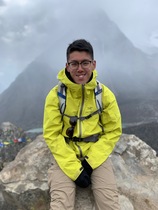 Gawain is intrigued by the outdoors and mountains, and he aspires to be able to climb them confidently one day. As a current student residing in tropical and mostly-flat Singapore but dreaming...Read more
Have a question? Ask fellow travellers and travel experts here.
Want to contribute as a Local Expert?
Register Here
Hotels
Lowest Price Guarantee

Explore Chengdu (prefecture)
Good things are meant to be shared!