If you happen to make your way outside these days here in the Lone Star State, you’ll notice that air is cooler and crisp. ‘Tis the season fellow adventurers and travelers, and not for snow and Old Saint Nick, but rather for all things that go bump in the night.

With Halloween on the horizon, what better way to celebrate the season of scares by exploring local legend and lore. Below are four sites near the Dallas-Ft. Worth region where one could get personal with the paranormal. While there are many tales of spirits, I am not interested in simple hotels and restaurants that see consumers on a daily basis, but instead the dark and twisted history that these places are trying to forget. Proceed with caution. Constructed in 1884, Old Alton Bridge as it’s formally known, is a historic bridge that once united smaller suburbs of Denton and Copper Canyon in North Texas. Now, among the National Register of Historic Places, word is that the structure is said to be the sighting of the infamous Goatman, a mysterious figure with the body of a grown man with the head of goat. What makes this legend specifically haunting is that it is born of hate and murder.

When Oscar Washburn, a respectable honest businessman whom the locals nicknamed the Goatman, moved his family and goat farm north of the bridge, he was met with discontent and jealousy from hate groups within the government. On August 1938, he was taken and hung over the bridge, but when his adversaries found an empty noose soon after they threw him over, they resorted to murdering the rest of his family. Today, aside from mysterious lights, rock throwing, and grabbing, locals warn that if you cross the bridge at night, you’ll be met by the Goatman.

While I did not feel any ghost tugging at my shirt, there was an apparent creepy vibe; most of which is due to the abundance of large spiders hanging overhead, missing floor boards in the actual bridge, and a mysterious mannequin head that was sitting on the ledge. Somewhere deep in the vast park that is River Legacy in Arlington, Texas, home of the Dallas Cowboys and Texas Rangers, there are two metal posts known infamously as Hell’s Gate. While River Legacy Park is home to many ghostly sightings, there is but one that stands as it holds certain historic significance.

The story goes that as Union spies made their way through this murky marshland, they were captured by Confederate soldiers and later taken to hang. Among the last thing they saw before their scheduled death was a gate at the end of a trail, which is said to still stand. Reports of whispers, sobs, and prayers are heard walking these very trails. The picture above is, sadly, not the entrance to Hell’s Gate but rather an opening to the to the curvy path.

When I went to track down the whereabouts of Hell’s Gate, I found nothing but lovely trails during the day, but with many twists and turns this enchanted park can become somewhat of a eerie labyrinth as the sun descends and leaves the mind subject to the many natural sounds of wildlife and rushing river water. In a quiet and quaint suburb north of Dallas, there’s an old cemetery that’s been enduring since 1853 and has since 1988 been established as a registered historical marker. While all seems eventless and still on the face, there’s a spiritual presence on a gravestone belonging to Oda Kirby. This specific gravesite, which reads “Lived and Died September 17, 1909,” is marked with strange symbols. It’s said that the infant’s tombstone on film comes out overexposed but I was able to take a clear picture. The site itself does bode a strange presence of someone watching, but the cemetery is right in the middle of surrounding houses.

Infinity Ocean View from the 9th floor with patio. The Belaire Theatre, now known widely as the Artisan Center Theatre, is home to a few spirits. Rumor has it that a projectionist died during work and is spotted from time to time still on the clock. With current issues like lights and water turning on, some would speculate that the building is just old or rather a playground for a deceased girl that many have interacted with. There is said that another roams the halls by the name of Neil, an elder who is far from welcoming.

Any city with a rich past like Dallas and Ft. Worth is bound to have a few legends and lore. What I found in my travels investigating each myth and ghost story is that every corner, street, bridge,and/or building has a special place in a city’s history. That urban legend then becomes apart of their identity and soon becomes important for one personal reason: what we are now becomes the spirit of what we’ll be later. Go forth and find your past. 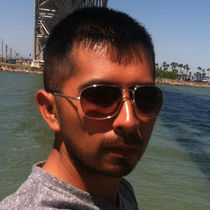 Martin is a writer that hails from the Lone Star state and is usually involved in anything food, film, or fitness. His inability to sit still has taken him from road trips across the American...Read more
Want to contribute as a Local Expert?
Register Here
Hotels
Lowest Price Guarantee

Explore Texas City
Good things are meant to be shared!