The first phrase that comes into my mind when thinking of a way to describe Tanzania is “wide country with many popular sights”, yet you can travel for days with local public transportation without seeing any tourists. Why is that? It’s certainly not because of a lack of tourists in Tanzania! Once you get into Serengeti, you’ll see loads of tourists. It’s rather because, although it’s much more expensive, most tourists choose to drive around with rented vehicles or organized tours. Is it the fear of mixing up with locals? Is it the impression that there’re no buses available? Is it a lack of information? True, the roads are not always the best and it can sometimes take a long time to get from one destination to another, but in most cases you can find relatively easy public transportation no matter where you want to get and it’s definitely a better way to get to know the local culture, not to mention much cheaper. Here is some practical advice on how to use public transportation in Tanzania and things to be aware of. Like everywhere in the world, one important thing to be aware of is price. Especially if you’re travelling for longer distances, you should know beforehand how much the bus fare costs, otherwise you might be ripped off. In small places where there are usually not so many tourists this doesn’t seem to be the case, but in towns like Arusha or Moshi or cities like Dar es Salaam, sales people from all the bus companies will jump on you, trying to convince you to get into their bus, shouting different prices and different facilities. The price is not written anywhere, so how do you know if they’re charging you correctly?

What I did a few times was to ask locals how much a bus ride to an area or place costs before getting to the bus stop. They usually know the prices well and have no incentive to lie to you if you address them in a friendly way. If you get to the bus stop and still have no idea about the prices, another way is to start negotiating with all the sales representatives from different bus companies. They will most probably end up lowering the price until it closer to its real value. But be aware that this can be a messy process, with many people talking loudly, maybe some even trying to convince you by pulling you closer to their bus. The other option is to just sit back for a while and observe how much the locals pay. This way you will at least have a rough idea of what you’re supposed to pay. Some will require the payment to be made on the bus, others before boarding. But don’t worry, there’s usually no reason to rush: the buses might take a while before they start leaving and even if they do, there are usually many buses going in the same direction.

2. Bus prices for the most important routes Source: Photo by user Jonathan Stonehouse used under CC BY 2.0

The main routes that can be reached by bus are Dar es Salaam to Arusha or Moshi, Arusha to Mwanza, Mwanza to Kigoma and Arusha to Dodoma (passing Babati). To give you a rough idea of the general prices, I’ve listed how much all these routes cost as of November 2016. Since you will be paying in Tanzanian shilling and not USD, keep in mind that at that time the exchange rate was roughly 2,000 TZS for 1 USD.

To get from Dar es Salaam to Arusha or Moshi you need 30,000 to 35,000 TZS (around 15/17 USD). It’s a long journey, taking about 10 to 12 hours, so be prepared to be on the bus for a while. There’s usually a lunch break close to a restaurant and many options to buy snacks at the bus stations you’ll pass.

3. Train system - what are the destinations that you can reach by train? Source: Photo by user Richard Stupart used under CC BY 2.0

Traveling by train is much more comfortable than by bus and there are a few destinations reachable by train in Tanzania. Unfortunately though, most of the time trains only leave a certain destination twice a week, so you’d have to plan around their timetable. There are two main railway lines in Tanzania – the famous TAZARA that goes all the way to Zambia (Kapiri Mposhi) from Dar es Salaam and the Central line that crosses Tanzania from east to west, from Dar es Salaam in the East all the way to Kigoma in the West. Both take between 48 to 56 hours for the entire route, they have sleeping cars (1st and 2nd class). The route takes officially only 36 hours, but there are huge delays. Of course the final price depends on the type of ticket that you choose. For you to get an idea, a second class sleeper will be around 70,600 TZS (35 USD) for TAZARA and a bit cheaper for the Central Line.

4. Staying safe while traveling by public transport - things to keep in mind Locals are generally friendly and curious to speak with travelers, especially if you’re by yourself. They will offer to help if you have questions, ask your opinion about Tanzania, tell you that they’d also love to travel to your country, sometimes even take some time to explain to you certain things about their culture. Of course, like everywhere in the world, there are a few things that you should pay attention to in order to stay safe.

First and foremost, avoid walking by yourself when it’s dark – find a trustworthy friend or take a cab. Keep your valuables close to your body – especially if you’re taking a night bus or if you tend to fall asleep while on the bus, you wouldn’t want your bag to disappear, especially if your passport and money is in there. Figure out how to get to your accommodation before getting on the bus – the bus might break down, you might get there late at night instead of in the afternoon. Be friendly and always smile to the locals, greet back when they greet you, don’t get annoyed if you’re being stared at – remember that tourists don’t show their faces too often on local buses.

Traveling always comes with learning – learning about a new culture, learning some words in a new language, learning how to read the map, learning how not to get lost in a new place. Using public transportation in a new country is also a great learning opportunity and gives you many opportunities to interact with the locals. Even if you’re only spending a short time with the locals, during that time you end up being a simple passer-by, interested only to take many pictures and see the new sights. On top of all that, it’s also much cheaper, allowing you to start planning another trip. So, if in doubt, opt for public transportation! 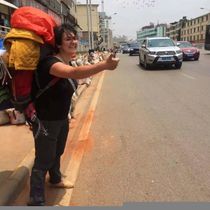