Stopover In Guayaquil: Things To Do In Ecuador's Port City In 48 Hours

A stopover less than 48 hours may not do justice to any destination, much less the largest and most populous city in Ecuador. Located on the banks of the Guayas River, Guayaquil is known as the Pearl of the Pacific and the commercial heart of Ecuador. Dating back to the 16th century, this port city portrays a baffling contrast of old and new architecture, danger and compassion, and pure love for iguanas in public spaces that impels one to rethink the idea of reptiles as pets!

If you are doing the mandatory stopover for your onwards journey to the Galapagos Islands or Pacific Coast, explore these things to do in Guayaquil and perhaps consider a longer stopover on your next visit! The main tourist belt in Guayaquil lies along a 2.5km boardwalk overlooking the Guayas River. Well-paved path and shiny buildings dotted Malecón 2000, which boasts historical monuments, museums, malls, gardens, restaurants and the first IMAX theatre in South America! At this riverfront promenade that is best explored at late evening, one can hop on a ferris wheel for a bird’s eye view of the city.

The modern Malecón 2000 stands in sharp contrast to its surroundings, especially Las Penas, the first neighbourhood of Guayaquil. Recognised as ‘Cultural Heritage of Ecuador’, the neighbourhood of Las Peñas was born more than 400 years ago! These colourful colonial-style houses sit at the foot of Santa Ana hill. Once the homes of former presidents, writers and artists, many of these quaint structures have been converted into art galleries and shops, open mostly only during the tourist’s peak season. Still, if you are a fan of American writer Ernest Hemingway or Chilean poet Pablo Neruda, visit Las Peñas and trace the footsteps of these literary legends. To escape the heat, hop in one of the gallery cafes and enjoy a cup of coffee or the famed Ecuadorian chocolate.

Enjoy the breeze at Guayaquil Lighthouse Located atop Santa Ana Hill, the 18-meter Guayaquil Lighthouse (El Faro de Guayaquil) is easily accessible via 444 steps with restaurants, cafes, galleries, shops and lookout points along the way. Keep a count as you head north; I imagine kids would love climbing these well-marked steps. A Naval Museum and chapel accompany the lighthouse at the peak, where you can get a complete view of the city. The quaint and pretty environment is well-guarded and will set one at ease, even after hearing all the dangers of the city.

"SANITIZADO" ROOM IN FRONT OF THE AIRPORT Also known as Bolivar Square named after the military and political leader who was instrumental in helping Latin American countries achieve independence, the Seminario Park (Iguana Park) is a public urban park that sits at the front of the Cathedral of Guayaquil. However, locals and visitors are most likely to overlook religion (the cathedral) and history (statue of Simon Bolivar) as iguanas of all shapes and sizes lounge around the park and charm people to feed them.

Under the glaring sun of Guayaquil and the love of park visitors, these cold-blooded reptiles thrive alongside rock pigeons in the Seminario Park. Some iguanas are longer than one meter! A lady held a piece of lettuce to one of the iguanas with a loving gaze, reminding me of a mother holding a bottle of milk to her baby. Maybe iguanas make good pets too… …

In case you are wondering, the iguanas belong to a classic species from Guayaquil and can be found in different areas of the city, usually close to rivers. Foodies will love Ecuador for its rich, flavourful dishes and one of the highlights when traveling in this country is dining! In Guayaquil, you can expect high-quality food accompanied with impeccable service. If you wish to join the quest for the best crabs in Guayaquil, do consider visiting Red Crab in Urdesa (an affluent suburb) and don’t miss their desserts. For the undecided, an all-inclusive buffet at La Papa de Oro of Gran Hotel serves a delectable spread with possibly the best hot chocolate in town! Hot and humid, Guayaquil’s proximity to the equator and Pacific Coast bring forth a climate similar to islands in Southeast Asia. Beads of perspiration trickled down my temple as I explored the city; a familiar sensation that reminded me of home in Singapore. Similar to my country, Guayaquil’s main attractions can be explored on foot if you are staying in the downtown area.

Other modes of transport include local buses and taxis (most do not turn on the meter). Should you be taking a taxi, it is best to get your accommodation provider to help you to call for one, or if you are on the street, check the prices with the driver before hopping on. Happy travels! 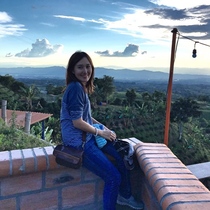 Explore Guayaquil
Good things are meant to be shared!