You do not need a hundred reasons to travel to Ukraine, an incredibly large country that lies East of Russia. It is one of the biggest European nations. It has quite a handful of interesting sites, including the world’s first power plant in Chernobyl, the world’s deepest station, Arsenalna, and even the world’s heaviest plane, Antonov An-225 (nicknamed Mriya, which means ‘dream’). Kiev, the country’s capital, offers intriguingly beautiful architecture and arts that embody the rich Ukrainian history and culture. Since Ukraine is bordered by the Black Sea in the south, you also get the rare chance of vacationing in the tumultuous waters of the Black Sea in the background. Before you go to this interesting country, check out the top ski resorts and other places to stay. To be convinced further, browse through the list and discover more things Ukraine is famous for.

Because of the tragedy of the Chernobyl explosion, Pripyat in Ukraine eventually became a ghost town. For those unfamiliar, ghost towns are abandoned towns or villages caused by disasters. This Ukraine ghost town had a recorded population of 49,360 before it was evacuated after the Chernobyl disaster. Chernobyl in itself is another ghost town in Ukraine, but it is only partially abandoned since it is still occupied by around a thousand people to this day. Employees and other personnel of the Chernobyl Exclusion Zone also reside in the city.

In Kiev, Ukraine is where you’ll find this mesmerizing architectural monument. Saint Sophia’s Cathedral is the first heritage site in the country to join the World Heritage List. This landmark is named after Hagia Sophia, the 6th-century cathedral in Istanbul. The cathedral was designed after a Ukrainian Baroque and a Byzantine architecture style and belongs to the Seven Wonders of Ukraine. The cathedral complex includes the following structures: Sophia Cathedral, a bell tower, the House of the Metropolitan, the Refectory Church, and many more.

If you don’t know that this is what is Ukraine known for, here it goes! Wearing the wedding ring on the right hand is one of the many fascinating things Ukraine is famous for, culture-wise. The ring finger, fourth from the thumb, is believed to be connected to the heart. Symbolically, the ring finger stands for love and loyalty. Ukrainians, however, prefer to wear the wedding ring on the right hand as the left is associated with untrustworthiness and menace.

Ukrainians can’t seem to get enough of dolls. Motanky dolls, sometimes called knot dolls, are one of the many creative things Ukraine is famous for. Yet these beautiful dolls are more than just cuddle and play buddies. They are believed to be guardians of the family, representing a woman’s wisdom and strength. They often have bare faces. Some, however, have a solar sign, which represents welfare and balance. The great thing about Motanky dolls is that they’re very much doable on your own.

No one leaves Lviv without sipping on their delicious coffee or snacking on chocolates - two of the hundred more things Ukraine is famous for. In the late 18th century, Lviv even became a haven for anyone seeking tasty, handcrafted chocolates. Ukraine already has a strong coffee culture, to begin with. Pair that with world-class chocolates, then you get throngs of rustic cafes that are now part of the country’s main attractions, especially in Lviv. You can join coffee and chocolate tours in Lviv, too. Sip, bite, and learn history altogether!

Its outlandish size is definitely part of the list of fascinating things Ukraine is famous for. Specifically, Ukraine covers 603,628 km2 (233,062 sq mi) of ground. People regard Russia with 17,098,242 km2 (6,601,668 sq mi) as the largest European country. However, not many know that 70% of the Russian territory lies in the Asian border such that it is arguably part of Euroasia. Thus, strictly European territory speaking, Ukraine is the biggest.

Things Ukraine is famous for include the local vodka called horilka, which means ‘burning’. The term is practically used to refer to not just vodka, but to any other strong spirits. This strong alcoholic drink is considered one of the world’s purest. Fun fact - horilka is meant to be savored languidly, not rushed, and is best served at 8°C to 10°C (46°F to 50°F). Anything cooler than that results in a diluted version, and you don’t want that.

The world believes that gas lamps are of Viennese origins. Well, this is not entirely true since the first-ever gas lamp was invented by two local pharmacists in Lviv, a city in Western Ukraine. The then 1853 store was located in a building that now houses Gasova Lampa cafe, a pub museum that is a tourist favorite. Gasova Lampa is a cool place to appreciate art and history, at the same time fill your bellies with sumptuous Ukrainian dishes.

9. The Tunnel of Love

Railways have never looked this captivating and refreshing. The Tunnel of Love is a railway surrounded by green arches, running three to five kilometers (1.9 to 3.1 miles) in length. It’s part of a longer industrial railway, linking Klevan to Orzhiv. Couples love strolling through this charming stretch of passage under a forest. This Ukraine attraction is equally beautiful even when the leaves burst into fiery autumnal shades. It certainly makes to the list things Ukraine is iconic for.

Paska, popular among Eastern Orthodox cultures, is a traditional bread consumed during Easter. One of the many traditional food in Ukraine, paska in the Ukrainian language literally means ‘passover’. A typical Ukrainian Easter basket is filled with not just colorful eggs, but also with well-made paska and cold cuts.

After performing ceremonial rites, a family member, often the eldest, slices the bread into pieces and distributes them to everyone. This is how Ukrainians break their fast, and the delicious paska is officially included as one of the interesting dishes Ukraine is famous for.

11. Maker of the Largest Airplane

Antonov An-225 is the largest airplane in terms of wingspan and length. It weighs 272,155 kilograms (600,000 pounds), too, making it the world’s heaviest aircraft. It is legendary, so much that it wowed the world. Mriya, its nickname, is proudly one of the many things Ukraine is famous for. This aircraft has six engines with a wingspan measuring 290 feet (88 meters). It is primarily used as a cargo plane since the late 1980s and continues to operate up to the present. Apart from its notable dimensions, it is also capable of running long miles and carrying enormous loads.

Discover the hidden wonders of Ukraine

There’s still a whole lot of fascinating things Ukraine is famous for besides the top ones here. All are meant to be experienced, not just Googled. On top of places to visit, you will appreciate the colorful and spiritually rich Ukrainian culture. Customs and traditions remain largely intact, owing to the people’s commitment to cultural preservation. So you’ll more likely taste dishes in their original recipes and see structures in their vernacular forms. 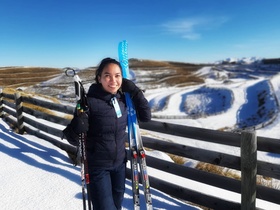 Jahz is a Philippine-based writer who enjoys solo travels as much as group adventures. She believes that life is too short to be spent living in one place, so she makes it a point to experience a...Read more
Want to contribute as a Local Expert?
Register Here
Hotels
Lowest Price Guarantee

Explore Ukraine
Good things are meant to be shared!