Visible from Inside a Starbucks, Visit the “Belly-Button” of Kyoto at Chohoji Temple!

Karasuma-dori, often regarded as the Kyoto’s main street, is home to a bit of a strange sight. At first glance, it looks like your run of the mill Starbucks, replete with a tall glass exterior. However, if you look a little closer, you’ll notice Chohoji temple visible in the background. If you’re in Kyoto and fancy a cup of coffee in an environment where you can enjoy the history and splendor of a place like Chohoji Temple, this is the spot!

See Right Through the Whole Store This Starbucks and Chohoji temple can be found on Karasuma-dori, which runs north to south through Kyoto.

If you go north along this road, you’ll arrive at Kyoto Gosho, where Japan’s emperors lived long ago. When present-day emperors visit this site, they travel on Karasuma-dori from the station. This explains why there are no pedestrian overpasses along this road (no one should be looking down at the emperor, after all!).

The featured Starbucks is a bit to the south of the intersection of Karasuma-dori and Sanjo-dori. The kawara (Japanese style roof tiles) of the temple are visible in the background of the picture above. Even from the street, at first glance it may appear as if the temple is just being reflected in the glass, but it’s actually behind the Starbucks. It might just make you dizzy.

Bus tour guides actually have a hard time explaining that the temple is located behind the Starbucks rather being reflected from across the street. From a bus, you only see it for a second, and most riders are prone to think that the temple is a reflection.

Best just to go there and have a coffee! The reason for the unusual design of this Starbucks has to do with building codes in Kyoto.

Many rules were created in order to preserve the historical look and feel of the city. Ensuring that the view of Chohoji temple remains unobstructed is actually a law! That’s why this Starbucks has so much glass on the used in its construction. The law was also taken into consideration when designing the interior, and the order counter is properly placed to avoid blocking the view of Chohoji. It also has a Japanese motif.

Because this Starbucks is a bit different, it’s designated as a “concept store”. While there are many locations all over Japan, this one might be worthy of a place on your Kyoto to-do list, especially if you’re a Starbucks enthusiast.

If you can manage to get a chair directly in front of the glass facing the temple, the view is really stunning. Given that the temple’s “casual” name is Rokkakudo, the Starbucks location is actually called Rokkakudo Starbucks. True Kyoto-ites might actually raise a fuss if you call the temple by its proper name, Chohoji. Rokkakudo (meaning six-sided temple) is a popular name arising from the hexagonal shape of the temple when viewed from above. People from the area also affectionately use the word Rokkaku-san, feeling a sense of local pride.

It’s said that the temple was built by Prince Shotoku before the 794AD relocation of Japan’s capital. Over the years it has suffered a handful of fires and was rebuilt several times. The current version of the temple was rebuilt in 1877 but remains full of history. It is part of the Saigoku Kannon Pilgrimage route, a visiting course of 33 temples throughout the Kansai region of Japan where guests can collect stamps. Upon entering Rokkakudo from eastern gate, you’ll notice a stone to the right of the main building. This location is known as the belly-button of Kyoto.

The stone with the hole was the cornerstone of the former Rokkakudo building. The building’s present location is a bit to the south of where the old one used to be. However, because the building was formerly the center of Kyoto, the area got the belly-button nickname, while the corner stone came to be known as heso no ishi, or belly-button stone.

Many legends exist regarding Rokkakudo.

One such legend states that the temple once found itself in the way of a planned road, and the emperor dispatched a messenger to tell the temple that it needed to move. The messenger asked the temple to relocate north or south, and the sky let forth a strange wind. The temple picked up and moved itself 15 meters north, leaving behind the belly-button stone.

Of course, that’s probably not really what happened, but it makes for a good story.

It’s also said that there’s a small, cute jizo (Buddhist monk statue) at the temple who will grant requests to those who pray so long as the request is simple.

Places like this where you can enjoy a powerful temple from old Kyoto while relaxing are few and far between, so make sure this finds its way into your Kyoto travel plans. 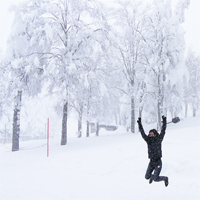