Witness Unimaginable And Marvellous Art Collection Of The Louvre, Paris

The richest and world’s most visited museum can be considered an exhibiting place of the history of humanity. The Louvre’s collection spans period from the 9th century BC up to the present day. The display encompasses works of art and objects created both by the greatest known artists in history and those with matching skills, but unknown names. Besides, the Louvre exudes the grandeur of the former royal palace, with an immeasurable architectural significance. You are going to be enchanted with such a marvelous combination of artistic and architectural craftsmanship. So, whether you are a fan of art or not, it is certain that something awaits you here which you’ll be interested in.

A word or two about the history The Louvre was created as a fortress in the 12th century, which was later demolished. The foundations were used for the creation of the Sully Wing, in the 16th century. The reconstructed remains of the fortification are displayed in the lowest level of the mentioned wing. Construction of the additional wings followed in the next centuries.

In the 16th century, Francis I transferred the royal residence to the Louvre. He purchased the Mona Lisa painting from Leonardo da Vinci, which resulted in amassing the works of art by subsequent rulers, Louis XIII and Louis XIV in first place. Further significant acquisitions followed during the Napoleon’s reign, who donated works of art brought from the conquered lands. French expeditionary forces, colonial authorities and sailors did pretty much the same.

The main royal residence was transferred from the Louvre in 1682 to the Versailles, and the palace was left to decay. In the mid-18th century, it was even considered to be demolished. Napoleon I, however, had it opened to the public in 1793, when the Louvre officially becomes a museum. The Louvre displays a wide diapason of exhibits – jewelry, monumental gates of the former palaces, sculptures, paintings – practically anything that might come to mind. They are exhibited throughout three existing wings – Richelieu, Sully and Denon – and are grouped by the related periods. Those are Antiquity, Middle Ages, Renaissance, etc. A wide range of displayed items relates to history, mythology, various beliefs, worldwide practices, etc. Masterpieces are spread throughout the expansive complex, and you would miss a great part of fun if you aim to locate only those. Take your time and enjoy. 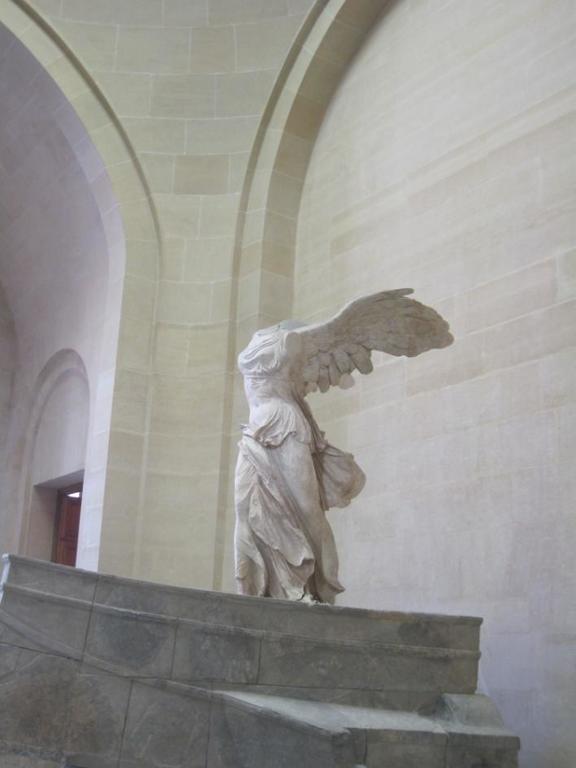 Certain masterpieces oughtn’t to be bypassed, regardless of your interests. One such is the Winged Victory of Samothrace, located in the intersection of the Sully and Denon wings.

The sculpture is believed to have adorned the prow of a Greek battle ship, symbolically leading it into victory. Creases of the robe indicate sailing upwind, which in combination with the wings demonstrates truly a magnificent stance. In my opinion, this is the unbeatable highlight among the sculptures.

Don’t miss “The Intervention of the Sabine Women”! During the emergence of the Roman Republic, the Romans entered the neighbouring Sabine territory and abducted their beautiful women. Enraged, the Sabine men gathered and marched into Rome. However, the bloodshed was prevented by the intervention of the brave women, who considered the abduction lesser evil than fighting against the overwhelming Roman force. The painting is displayed in the Denon Wing.

Catch a glimpse of the Tomb of Philippe Pot The sculpture is a fine example of the Middle Ages funerary art. It represents a recumbent statue of a powerful lord, dressed in his armour. The hooded mourners carrying his body wear the coats of arms of his predecessors. The aim was to underline the beloved lord’s greatness during his life.

Another highlight: The Great Sphinx of Tanis The sphinxes were considered the guardians of the Pharaoh necropolis, and the embodiment of their divine power during the lifetime. The related monument originated around the 27th century BC. Made of granite, it adorned the tomb of unknown Pharaoh. The masterpiece is located in the Sully Wing.

As you advance through the Louvre’s premises, make sure not to leave out the following areas:

The Denon Wing – The Apollo’s Gallery, The Grand Gallery (the largest exhibition room worldwide, abounding with paintings), and The Summer Apartments of Anne of Austria.

The Sully Wing – The Henry II Staircase (the oldest Louvre’s existing staircase), The Salle des Cariatides, and The North Staircase of the Colonnade.

The Richelieu Wing – The Marly Court (abounding with amazing sculptures), and The Napoleon III Apartments (probably most luxurious establishment you have ever seen).

For a quick visit you should allocate at least 5 or 6 hours. Given that you are probably with limited time in Paris, a day would be great. The Louvre opens its doors for free every first Sunday from October to March, but the crowds are immense, and your experience would probably be incomplete. The full daily rate is 15 EUR (17 USD). Holders of the Paris Museum Pass and other similar city cards have free entrance, without queuing.

While you are getting through crowded areas (while you battle your way toward Mona Lisa, for example) or taking a photo, make sure to have your belongings under tight control because of the pickpockets. Best days for a visit are Wednesdays and Fridays, due to extended working hours (21:45). Ordinary hours are from 09:00 to 18:00.

Finally, you should rent the audio guide if your French isn’t good. Descriptions of the showpieces are all in French.