Ah, Paris! One of the most famous and visited cities in the world, Paris goes by many names - the City of Lights, the City of Love, and even (rather obviously) the City of the Eiffel Tower. It’s also home to a host of prominent landmarks, like the Arc de Triomphe, Pantheon and Louvre Museum; even its acclaimed catacombs have had a movie inspired by it. Adding to the romance and allure of the city are its plethora of fountains; each with a long and varied history of its own. You could even have your own walking history tour of the city through its various fountains. Here are 10 of the best fountains in Paris, France.

The Medici Fountain has had an extensive history. Built in 1630, the fountain was moved to its present location and rebuilt in the 1860s. It is beautifully adorned with Romanic sculptures, which is a throwback to its Italian roots. There are actually two fountains in one; behind the Medici Fountain is the Fountain de Leda, a well fountain which was constructed in 1809 by none other than Napoleon Bonaparte himself. It’s situated within the grounds of the Jardin du Luxembourg, in a dreamy grotto.

Fontaine du Palmier is an impressive monumental fountain. At 18 m (59.1 ft) tall, the fountain sticks out like a sore thumb from a distance, although it is anything but. Commissioned by Napoleon in the 1800s to provide fresh drinking water for locals, it is adorned with several statues, notably the Statue of Victory, in commemoration of his various victories. It’s located on the Place du Châtelet, a small square that’s within walking distance to many other attractions and landmarks. Stop by the fountain for a quick rest and some pictures, although maybe it’s best that you don’t drink the water.

Source: Photo by user DDupard used under CC BY 3.0

The Béla-Bartók Fountain, also called the Crystal Fountain, was sculpted by Jean Yves Lechevallier in 1981. Its sharp, clean lines are a visual embodiment of Hungarian composer Béla Bartók’s work in tonal harmony. Surrounded by modern, high-rise buildings in the Béla Bartók Square, its sharp, cutting edges fit the background perfectly.

Fontaine des Quatre-Saisons (Fountain of the Four Seasons) is a curiosity. In any other location, it would’ve made for a much more impressive monument. Those who were confounded by its inaccessible location include Voltaire, who was famously irked by it. It’s large, beautifully decorated with several figurines, and has two water spouts that were once used to provide the residents on the streets with water. However, it’s interestingly located along a narrow residential area - a long street that connects Rue de Bac to the Boulevard Raspail - that has significantly diminished its grandeur.

A post shared by Catarina Rydbeck Hansson (@catarinarydbeckhansson) on May 4, 2019 at 4:45am PDT

A beautiful fountain in Place Saint-Michel, the Fontaine Saint-Michel was erected in the late 19th century and has been listed as a French historical landmark since 1926. Facing the main road in the middle of the plaza, the fountain is a majestic sight to behold. Various sculptures, including two winged dragons, adorn the fountain. Its centerpiece is a sculpture of Saint Michael himself, victorious in a duel with the devil. If you’re not a fan of majestic fountains, the square is also a nice place to people watch, and many street performances are also often held in front of the fountain.

Located in the similarly named Place Saint-Sulpice, Fontaine Saint-Sulpice was established in front of a church, in celebration of four famously eloquent French religious figures. Each of these statues represent one of these figures. Although initial reaction to the fountain was less than satisfactory, it has since gained prominence and is now renowned as one of the city’s historical fountains.

The Stravinsky Fountain is a quirky public fountain that was inspired by the works of its namesake, the famous composer Igor Stravinsky. The figures include a treble clef, a pair of full red lips, and a mermaid with water spouting from her breasts, among others. The vibrant colors of the fountain present a stark but appealing contrast against its decidedly more European background. Its sculptors have asked for the fountain to remain untouched and allow moss to grow, as a symbolism of how nature has taken over. This is definitely one very deep fountain.

L'embâcle Fountain was a fountain gifted to Paris by the city of Quebec in 1984. Unlike the other intricately adorned, modern sculptures on the list, the L'embâcle Fountain looks like a work in progress. However, upon closer inspection, you’ll notice the water spurting through the raised cracks in the pavement - this is reminiscent of the water in the frozen Saint Laurence river breaking up during spring. In addition to its artistic value, it’s also well-liked by children for its ability to double up as a convenient water slide.

Fontaine des Mers (Fountain of Seas) and Fontaine des Fleuves (Fountain of Rivers) are collectively known as Fontaines de la Concorde and are located at (you guessed it) Plaza de la Concorde, in the center of the city. The Fontaine des Mers was built to commemorate France’s maritime industry, while the Fontaine des Fleuves celebrates the river commerce and navigation industry. Both fountains are intricately adorned with allegorical figures, and add on to the mystique of the structure. Similarly located in the plaza is the Luxor Obelisk, a 75 ft (23 m) tall Ancient Egyptian structure that was given to France by the ruler of Ottoman Egypt. These three monuments definitely make for an impressive sight and an even more colorful history for history buffs.

Built in the mid-1500s, Fontaine des Innocents has the distinction of being the oldest fountain in Paris. It’s had a long history; originally christened as the Fountain of the Nymphs, it’s carved with ornate decoration of nymphs and various sea creatures, which adds to the mystique of the fountain. It then served as a viewing platform for nobles, which explains its house-like structure on the top. Finally, it became a water fountain for the neighborhood and relocated to its present location in 1858. Similar to other squares, it’s a good place to rest your tired legs, with a nice view and various street performers to admire at the square.

Paris: the city of treasures

Paris is one of the renowned cities in the world for good reason. It is a bustling cultural hub, with a different historical and cultural landmark on every turn. Its fountains are no different, with a multitude of fountains sprinkled throughout the city, each with its own unique history - perhaps it can add another title - the City of Fountains - to its arsenal of nicknames. 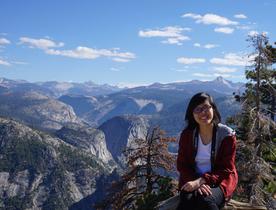 As a student, Gillian's wanderlust is limited by her meagre bank account. In her spare time, she likes looking at AirBnBs she cannot afford, playing with her pets (2 budgies and a dog!) and...Read more
Have a question? Ask fellow travellers and travel experts here.
Want to contribute as a Local Expert?
Register Here
Hotels
Lowest Price Guarantee