You’ve probably heard that New York City is magical during Christmas or New Year’s. Despite the fact that the 4th of July is possibly as important as those two holidays, celebrating this day in the city is much more underrated. Why? Frankly, there’s no valid explanation. With the annual Macy’s 4th of July fireworks, New York is just as enchanting on Independence Day as it could ever be.

Beginning at 9:20 pm and lasting for approximately 30 minutes, the Macy’s fireworks are set off from around Pier 17 near Brooklyn Bridge, and several other locations along the East River between 23rd and 37th Street. Given that this is the most well-known Independence Day firework demonstration in New York, chances are you will be fighting with others to get a view of the animated display. And, with this year being the 40th anniversary of this Macy’s celebration, expect it to be even bigger, better, and brighter than previous years.

There is no doubt that you will have to deal with crowds of people here on the 4th of July. I mean, this IS New York City that we’re talking about. But if you’re stuck on where to watch the fireworks, here are some suggestions for the best views:

1. Along FDR Drive by the East River Source: Photo by user David Spinks used under CC BY 2.0

There will be blocked-off sections along FDR Drive in both midtown and downtown. The midtown section runs between Houston Street and Midtown East, with entry points at 23rd, 34th, and 42nd Streets. Meanwhile, the downtown section lies on the elevated portion of the parkway, with entrances at Broad Street, Old Slip, Pearl Street, and Frankfort Street. Do note that you will not get a great view from anywhere further uptown since the fireworks are only set until 37th Street.

Tip: given that this is an official viewing spot, expect it to be very crowded. Even though you are guaranteed magnificent sights, you will have to get there early to secure a spot right by the riverside. It is best to be already waiting by 7 pm once the entry points open. Apart from FDR Drive, the other official Macy’s viewing site is at South Street Seaport. Dover Street, Fulton Street, and Peck Slip serve as the main access points to the viewing platform here. Located right around the corner from Brooklyn Bridge, you will undoubtedly get a great view of the fireworks.

What makes South Street Seaport different is that it isn’t just a spot for watching the fireworks. Featuring a 2-day celebration that begins on July 3rd, it will have lots of entertainment from 1 pm to 9 pm on both days. Jam out to DJs with live music performances. Taste the mouthwatering dishes at Smorgasburg, a renowned food and flea market. And appreciate art and fashion at the The Parsons School of Design exhibition.

The fireworks will only be displayed on 4th of July, but feel free to start celebrating in advance if you desire. Be sure to get there early to enjoy all the fun entertainment and embrace the vibrant atmosphere before proceeding to watch the fireworks. Source: Photo by user Raj Kondeti used under CC BY 2.0

Even though it is not listed by Macy’s as an official viewing spot, Brooklyn Bridge Park is a crowd-favorite for watching fireworks. Well-known by local New Yorkers, it is located right under Brooklyn Bridge by the East River, promising an outstanding view of the 4th of July fireworks.

If you plan to spend the afternoon at Brooklyn Bridge Park, do note that most attractions (e.g. Jane’s Carousel, roller skating) close at 4 pm. So bring a picnic to create your own little celebration with your friends and family. Not only is this a great way to commemorate this special day, it can also help you kill time before the fireworks go off at 9:20 pm.

Do not try to enter through the Atlantic Avenue or Pier 6 entrance if you are arriving later in the evening just for the fireworks. Apart from those two entrances, which close at 4 pm, all other entrances will remain open throughout the night. But get there as early as you can! As with the previous two spots, it will likely get very crowded from the late afternoon onwards.

Access: All entrances (except Atlantic Avenue and Pier 6, which close at 4 pm) Source: Photo by user Douglas Palmer used under CC BY 2.0

Right next to Brooklyn Bridge Park is Brooklyn Heights Promenade, another good spot to view fireworks from. Because of its location close to Brooklyn Bridge, the fireworks will happen right above your head. So you don’t have to worry about getting there early to secure a spot by the river. You will be able to see them even if you’re right in the midst of the crowd!

Lying right along the river, this 1,826-foot-long (557-meter-long) platform is a popular lookout with views from the Statue of Liberty to Brooklyn Bridge. This means that you will not only be able to see the renowned Macy’s display, but you may also catch views of the Jersey City and Statue of Liberty fireworks too.

Starting at 9:30 pm, these fireworks go off on the other side of Manhattan over the Hudson River, and there is no better spot to see both than from Brooklyn Heights Promenade. Who doesn’t like fireworks? The only thing better than watching one firework display is to simultaneously see two! Every firework show is different, each with its own array of colors and unique patterns. So head out to to the promenade for a firework experience like no other. Source: Photo by user Raj Kondeti used under CC BY 2.0

Located in Williamsburg, Brooklyn, East River State Park is a prime destination for firework viewing. Even though it may seem more rundown compared to other parks in Brooklyn, this modest park still has an amazing view of the Manhattan skyline. If anything, you are there for the fireworks and not for the park’s atmosphere, so don’t let it bother you too much.

Go all out with your Independence Day festivities, and grab a drink at one of the countless trendy rooftop bars and parties in the neighborhood. You can also bring your own lawn chairs or picnic blanket to sit on at East River State Park for a more peaceful celebration.

Most likely the least crowded spot on this list, East River State Park is perfect if you don’t like to be surrounded by mobs of people. Here, you can sit back, relax, and enjoy the imaginative firework display illuminate the sky before your eyes.

A New York sky like you've never seen before

If you happen to be in New York City on Independence Day this year, don’t miss out on the 4th of July festivities. Be sure to relax and have fun with your loved ones. Eat delicious American food, be it burgers or sandwiches. Sip on local beers and cocktails all day long. Dance to music by American singers. If you’re American, this is your time to flash your patriotism to the world. And even if you’re not, now is the best time to gain a true American experience firsthand, that is, to celebrate Independence Day. But most importantly, watching the famous Macy’s 4th of July fireworks is the biggest feature of the night, and you definitely won’t want to skip it. Even though there is only one big display of fireworks, there are many great spots for you to watch it from, all of which will make your jaw drop in awe. 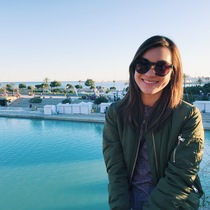 Verena is currently a journalism student in New York City. Having to move around a lot throughout her childhood triggered her passion for traveling at a young age. She believes that exploring new...Read more
Want to contribute as a Local Expert?
Register Here
Hotels
Lowest Price Guarantee