An Emotive Tour Of Eagle’s Nest In Berchtesgaden, Germany It is not often that you can find a tour that is both beautiful and haunting at the same time. Only such a tour could be offered in a location that has the most splendid views in the world and yet a tragic story as to what occurred there. I invite you to take a trip with Salzburg Panorama Tours, where you can travel from Austria into Germany to a historical location with the most beautiful scenery. The historical location is that of Eagle’s Nest, a gift that was once given to Hitler by his fellow Nazi Party member.

Due to the recent increase in the number of confirmed cases and death toll in Germany, travellers are advised to postpone all non-essential travel to Germany until further notice. Travellers who have recently returned from Germany should monitor their health for two weeks and minimise contact with other people. Travellers who develop symptoms of a cough, fever, or shortness of breath should seek medical attention immediately.

Check out the list of European attractions that are still open or temporarily closed due to COVID-19. You will board a coach from Mirabell Gardens in Salzburg and travel past some beautiful scenery into Bavaria. Whilst you may be enchanted by the beauty on your route, you haven’t really seen anything yet until you reach Obersalzberg.

Obersalzberg was once a base of the Third Reich and was the location in which Hitler, Goering and Bormann once held properties and made decisions that affected the fate of millions of people. Goering and Bormann were both senior Nazi officials. Goering was once referred to as Hitler’s, “minister without a portfolio”,* *whilst Bormann was Hitler’s private secretary that controlled the flow of information and access to Hitler. Bormann desired to give Hitler a special birthday present for his 50th birthday and so decided to design and ensure the build of a conference centre that is now known as Eagle’s Nest.

In order to reach Eagle’s Nest, you will need to hop onto a shuttle bus from Obersalzberg that will take you through a one-of-a-kind and an unusually winding road through the Kehlstein mountain. The reason that you have to hop onto a shuttle bus is because since 1952, the route from Obersalzberg to Eagle’s Nest has been closed to normal traffic and only special vehicles with a certain type of engine are allowed to be used for this route.

The road that you will be travelling on was made in 1937 in around 13 months by 3,000 individuals instructed by Bormann. The road is made through a mountainside and your shuttle bus will pass through five tunnels and will take you on the most phenomenal 6.5 km/4 miles with a 27% gradient uphill to reach Eagle’s Nest. The journey will last approximately 20 minutes one-way. The creation of the road itself was extremely dangerous and 12 individuals died in the process of it being made.

You will experience a very crazy, curvy ride with views that are simply out of this world.

Travelling by foot through the 1938 tunnel After the ride in the shuttle bus, you will reach the entrance to Eagle’s Nest, which includes a stone lined tunnel that will lead you 124 meters/79 feet horizontally into the mountain. The front of the tunnel includes a 3-ton marble slab above the door that states, “Erbaut 1938” and translates into “Built in 1938”. As you will note whilst walking through the tunnel, it is quite dark and is lined with rough marble. During Hitler’s time, when he wanted to visit his conference centre, he was driven through this tunnel and dropped off at the elevator and when it came to him leaving, his car would have to reverse all the way out of the tunnel (in order to prevent him having to walk). You will have to walk for about 5 – 7 minutes from the entrance of the tunnel. Once you reach the end of the tunnel, you will find the entrance to Hitler’s elevator, which you will be transported in so that you reach the conference centre. The interior of the elevator includes well preserved polished solid brass and some Venetian mirrors. During Hitler’s time, it also included leather benches for him and his guests to sit on during their rather short journey in the lift. The total time for the ride is 41 seconds and you will be transported 124 metres/407 feet vertically through the mountain to its peak. The elevator can carry 53 passengers at any one time and has never failed since it was built. However, in the instance that there is an issue with the elevator, there is a rescue elevator, with a separate engine, which can carry 3 passengers at a time.

It was rumored that as Hitler suffered from vertigo and claustrophobia, he rarely actually enjoyed the conference centre and it was more his wife, Eva Braun who spent time entertaining her family and friends in the location. Nevertheless, you will still find that it is a rather surreal and even unsettling experience, taking the exact footsteps and standing in the place of a man who planned and ensured the execution and murder of over 6 million people.

A decision centre for the Nazi Party 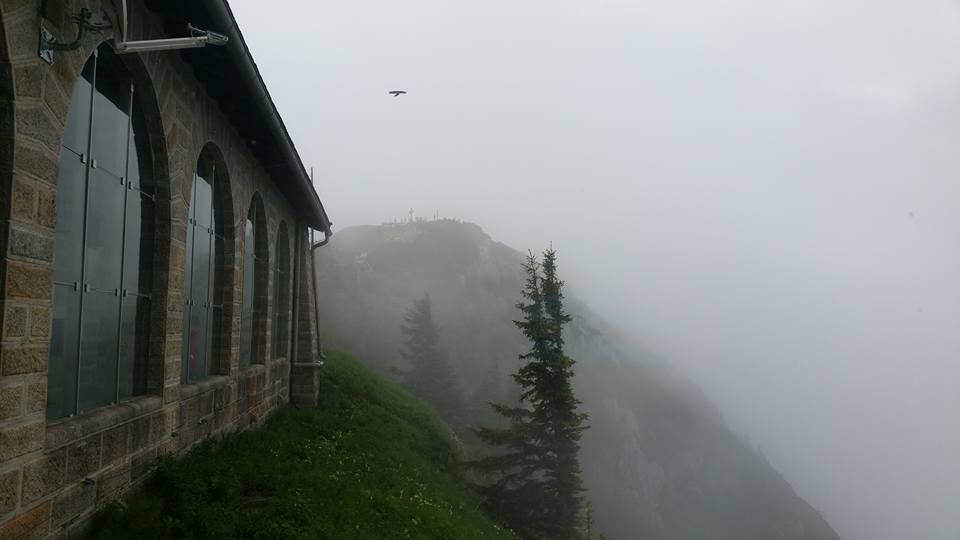 When you exit the elevator, you will find yourself within a little building, which itself is a masterpiece, perched 1,834 metres/2,736 feet on the top of the Kehlstein mountain. This little building is the gift that Hitler received. It was initially a conference centre that then became used for dinners and tea parties by and for Hitler, his family and his fellow Nazi Party members. You will have free time to explore this little building. It can feel quite overpowering to be in the exact conference room where Hitler planned and changed the face of Europe. Walking through the little building will be a thought-provoking experience as it is a place where the Nazi Party plotted and planned their moves in World War II. Hitler made approximately 17 trips to this little building.

One of the rooms that was previously held for dinner parties now includes a mountaintop restaurant, with paneled walls and small tables serving a limited selection of food and drinks. There is also a small souvenir shop included.

The most shocking part is when you exit the building and walk around the peak of the mountain; you will see the real beauty that this world has to offer. This is such a contrasting feeling to the sombre and tragic tone of the memories encapsulated within the little building. By standing outside the building and admiring the views, you also have a moment to remember that some of us are fortunate today to have freedom and liberties.

As you walk outside of the little building, you will be spellbound by the views of the Bavarian Alps; you’ll see snow capped mountains and lots of greenery from every angle. The views down to the valleys were so impressive. The scenery is breathtaking and to some extent, indescribable. It is the type of scenery that you need to experience. You will have approximately 1 hour to see the little building and the surrounding scenery.

After World War II, Eagle’s Nest was to be destroyed like many of the other buildings in the area that were associated with the Nazi Party. However, the Bavarian District President decided that the building should be spared from being blown up. It is one of the few buildings from the Nazi period that still remains and can be viewed in nearly its original condition. Today, Eagle’s Nest is under the administration of the Berchtesgaden–Konigssee Tourist Office, which uses all of its profits for charitable purposes.

If you are travelling with Salzburg Panorama Tours, which I thoroughly recommend, you will also have the opportunity to visit Berchtesgaden on your return to Salzburg. Berchtesgaden is a charming little mountain town filled with narrow winding streets, colorful buildings and cute and memorable statues. You will have approximately 1 hour to have lunch and some sweet treats in this gorgeous little heaven. The cost of a tour to Eagle’s Nest, with a stop on the return in Berchtesgaden costs 55 EUR (approximately 61 USD) with Salzburg Panorama Tours. I would do this tour again in a heartbeat.

Puja Modha has trained as a lawyer, worked as a compliance officer and is an experienced travel journalist that enjoys writing about her experiences across the world. She was born in England, her...Read more

Top 3 activities to book in Bavaria

Explore Bavaria
Good things are meant to be shared!