10 Things You Have To See Around Livorno, Italy

Livorno is a charming city located on the Western coast of Tuscany, on the Ligurian Sea and is considered one of the most important ports of Italy. Only 2 hours 15 minutes away from London by plane and 20 kilometers (12 miles) to the south of Pisa, Livorno, also called “Livorno, the Tuscan Venice,” is also one of the most modern cities in Tuscany. Paradoxically, the city has many archaeological remains that fortunately have not been destroyed during World War II. With a lively population of around 156,000 and an extremely favourable position on the Tuscan coast, the city has a vast range of attractions and activities not to miss. This article will showcase the top 10 things you have to see around the city.

1. Discover the wonders of Pisa Pisa is a city near Livorno, best known for its iconic Leaning Tower, the bell tower of the Romanesque, the striped - marble Cathedral and the Baptistery that stand next to it in the Piazza dei Miracoli. In addition to these magnificent sites, the city offers many other interesting things to see worth at least an entire day to visit, such as the beautiful Square of Miracles (Piazza dei Miracoli) or the Cemetery, the Cathedral Museum and the Museum of the Synopses. Visitors can also enjoy while walking along the Arno River, passing by the other historical sites such as the Clock Palace and the Piazza dei Cavalieri.

2. Travel in time around Fortezza Vecchia Close to the Livorno’s waterfront, the Fortezza Vecchia was constructed in the 16th-century on the site of an earlier 11th-century castle and Livorno’s oldest remaining structure from the early Middle Ages. Nowadays, the Medici fort is usually open for tours, and tourist can appreciate its huge vertical cracks and bits crumbling away and also climb to the top of the Mástio di Matilde for stunning views of the port and city. 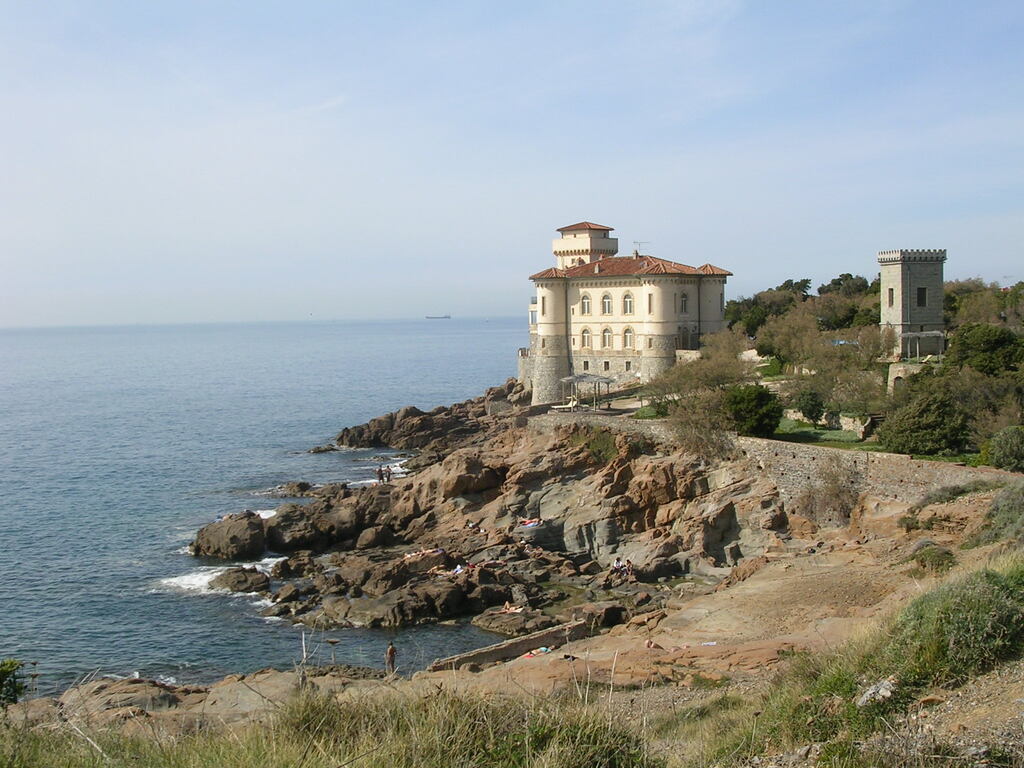 From the end of Livorno’s waterfront, tourists can walk along the beautiful Viale Italia enjoying the scenery, the enchanting nature and the views of the Tyrrhenian Sea. It’s a great area to venture, especially in the summer. As you explore the coast, crossing the parks and beaches, the walking paths lead to secluded coves and scenic headlands such as the Cala del Leone (Cave of the lion), a cove in the seafront, where stands an imposing castle. The Montenero Sanctuary is a religious complex placed on a hill overlooking the sea and the port of Livorno. This famous place of Tuscany was built in 1345 and is worth passing by to hear its history, to gaze at its religious arts and to enjoy the panorama of the area from the hilltop.

Nuova Venezia (New Venice) or Piccola Venezia (Little Venice) is one of the most enchanting parts of Livorno which displays a Venetian style architecture with canals (dating back to the Medici era) crossing the district, small bridges and boats. Tourists will have fun exploring this picturesque neighborhood; either from side footpaths to discover the Church of Santa Caterina or by tour boat circling the Fortezza Nuova (the new fort) and following the canal underneath the Piazza Della Repubblica.

6. Discover the history of the Monumento dei Quattro Mori

The “Monument of the Four Moors” is one of the most famous monuments of the city, “The Mascot of Livorno” and is located in Piazza Micheli. Composed of two very different sections, a marble statue and a bronze base, the monument commemorates the victories of Ferdinand I of Tuscany over the Ottomans. Due to its precarious position close to the port, the monument was dismantled and moved away during the war, to save it from destruction. Through the times, many rumors and beliefs have been surrounding this magnificent sculpture. 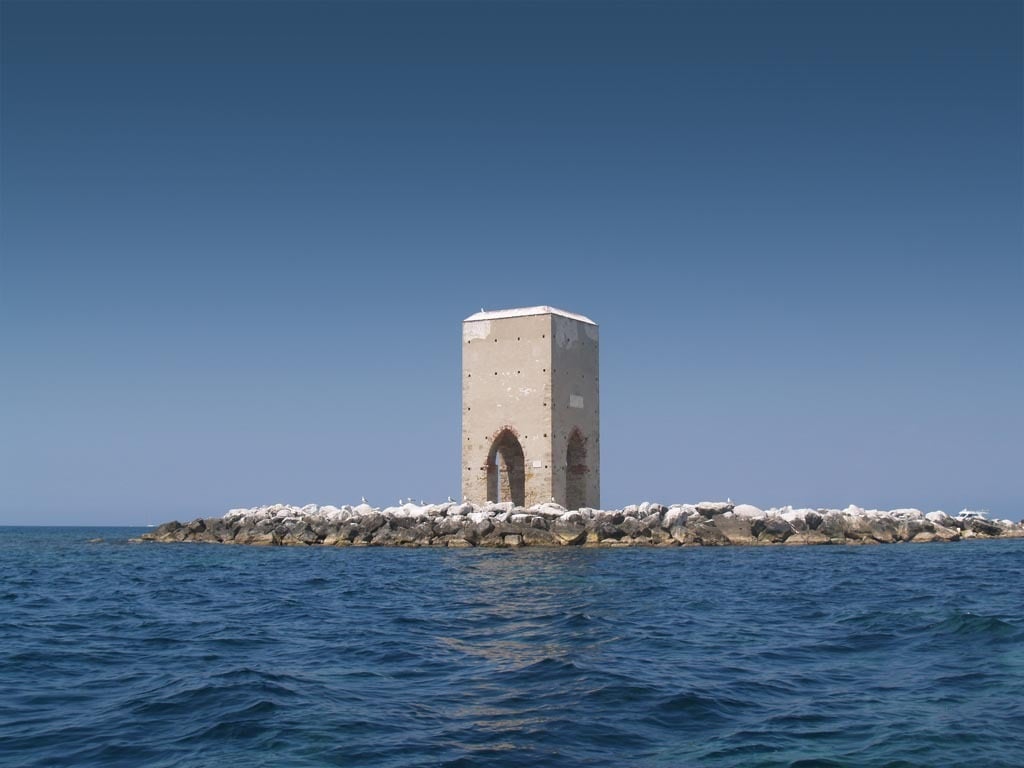 The Meloria Tower is located in an area of lowlands and rocks emerging from the Ligurian Sea in front of the port of Livorno, which is about 7 kilometers (4.3 miles) away. The tower is an 18th-century building that rises, isolated in the sea. The tower was originally devoid of a signaling system for sailors: Meloria’s first lighthouse was erected by the Republic of Pisa around the 12th-century. It is also well known because of the famous battle of Meloria, between Genoa and Pisa, which in 1284 led to the destruction of the original tower. Its actual construction consists of four joint pillars supported by sharp arches that allows free flow of water. Since 1867 a high metal lighthouse was built in front of the tower.

8. Stroll along the Terrazza Mascagni Built upon Livorno’s destruction of WWII, the Terrazza Mascagni is one of the top-ranked places in the city. Located along Viale Italia, this great chessboard-style terrace, made of many white and black tiles is a wide promenade attracting tourists, but also joggers, runners and locals to stroll and meet along the seafront. This architectural reminiscence of the paintings of Salvador Dalì is also the ideal place for a romantic evening! The tower of Calafuria was an integral part of the coastal defensive system that stretched south from Livorno in the past. It rises along Via Aurelia, a short distance from the modern reinforced concrete bridge built in the postwar period. This 20 meter (65 foot) high building has a square plant with a body of almost 8 meters (26 feet) on the side, supported by a large shoe wall. Built in the 19th-century, the Mercato Centrale is a 95 meter (311 foot) long food market that miraculously survived Allied WWII bombing. It is perhaps one of the more interesting architectural structures in Livorno, consisting of a huge structure (almost as big as two football fields!) built with iron and glass. This unique market, hosting 200 stalls for fish, food and more, is the place to get lost for a slice of local life and color, including the most astonishing fish and seafood. From Monday to Saturday mornings, you can sample local cheeses and salamis, fresh-ground coffee and breakfast pastries for a tasteful lunchtime on the beach.

Livorno and its surroundings are a real heaven for all wanderers

Livorno has many activities and the Tuscany region surrounding the city is also full of great things to do. Culture lovers, monument hunters, traditional food and outdoor fans; there’s something for everyone here! Explore Livorno
Good things are meant to be shared!