Hike From Pamplona To Logroño Along A Holy Way

The Camino de Santiago (Saint James Way) is the largest and arguably the best-known Catholic pilgrimage route in the world. Millions of Christians have followed this historic route and thousands of them still do every year, but there’s much more to this holy trail than being redeemed of all your earthly sins once you get to Santiago de Compostela, in the northwest of Spain: it is a superb walk that will make you discover some of Spain’s most picturesque villages, sturdy yet delicately built churches and cathedrals and will allow you to share your life for some days with the most diverse people coming from any imaginable corner of the world. Today I’ll introduce a part of this walk, from Pamplona (Basque Country) to Logroño, that can be accomplished in 5 days on the famous Camino Francés, or “French Way”.

Discover the city of Pamplona, where Hemingway’s The Sun Also Rises is set In Pamplona, the first thing you should do, before succumbing to the smell of the pintxos (the exquisite Basque version of tapas), is to get to the Albergue de Pelegrinos, the Pilgrim’s Hostel, to obtain your Pilgrim Certification. This document is essential if you’re planning to stay in any of the hundreds of hostels along the way or if you plan on getting the compostelana, an official document from the Catholic Church, that will prove you have walked along the Camino and will redeem you of all your earthly sins. Once you’ve gotten the Certification, you’re ready to go and discover everything the Camino has to offer!

Pamplona’s most famous area is located around the magnificent Plaza del Castillo, the Castle Square, which is filled with bars and restaurants. Right next to the square is Calle Estafeta, arguably Pamplona’s most famous street, where tons of people savour some of the world’s best Pintxos during the year and where the crowd gathers during the San Fermín festival, held annually from the 6th until the 14th July, all dressed in white shirts and trousers and a red handkerchief around their neck, to see the encierro, the running of the bulls. The street gets particularly full at night, when the Pamplonicas, Pamplona’s natives, go out, share some pintxos and glasses of local wine and talk all night long. However, if you’re planning on walking the next day a good piece of advice would be to get to the hostel before 10:00 PM, since most of those have a curfew to provide early-morning walkers with a deep sleep. 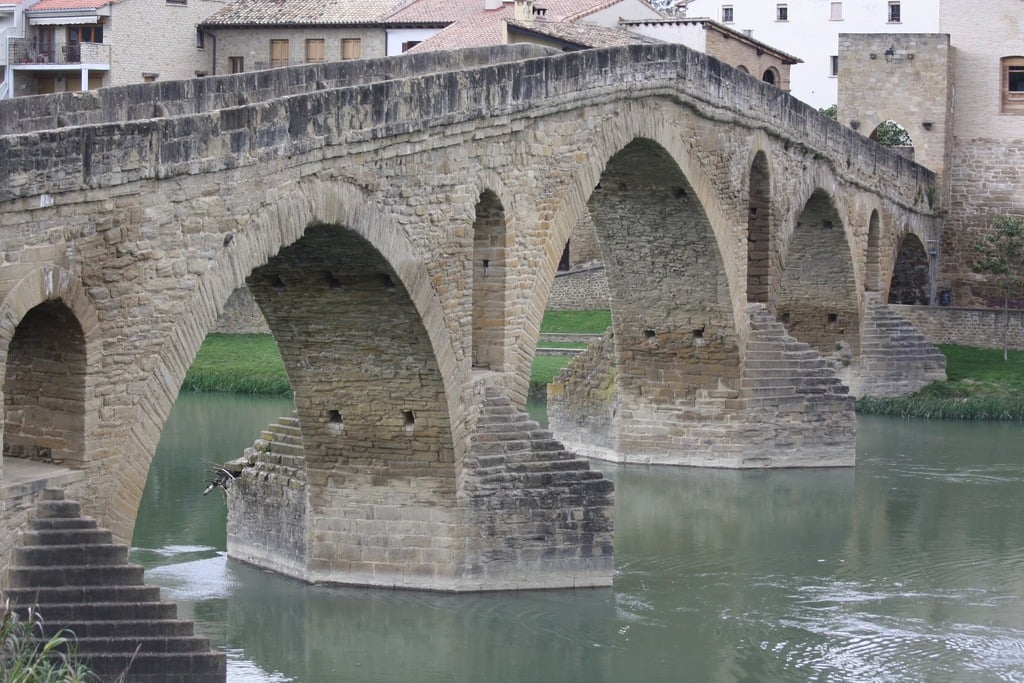 Source: Photo by user Hans-Jakob Weinz used under CC BY 2.0

You should wake up no later than 7 AM in order not to be burned alive by the Spanish sun. A fulfilling breakfast is a must, since you’ll have to walk about 5 or 6 hours. After crossing the city and the river Sadar, you’ll get to Cizur Menor, a small village of 2,000 residents where you can take a break from walking and have a cup of coffee and a sandwich. Your way continues across some cereal fields and culminates in the Alto del Perdón, a peak of 750 m where you’ll enjoy a marvelous panoramic view of the whole Navarra. Once the mandatory pictures are taken, you’ll go downhill and cross the small villages of Uterga, Muruzábal and Obanos, before getting to Puente la Reina, a historic landmark for pilgrims and the end of your first stage.

Puente la Reina, whose name comes from the stunning XIth century stone bridge over the river Arga that you’ll cross, is a village of around 3,000 residents where the “French Way” merges with the “Aragonese Way”. Thanks to this, the village is filled with pilgrims of all ages and nationalities, most of which will be staying at any of the local pilgrim’s hostels.

Most of the hostels of the Camino have kitchen amenities, so you should be able to cook more or less anything you crave; however, my advice would be to keep the cooking simple for two reasons: first, there’s a lot of people in the kitchen at the same time and they’re all as hungry as you are, and second, you’ll be exhausted and probably won’t have the patience to prepare an elaborated dish. After dinner, most of the pilgrims gather in the common areas and discuss various topics around a bottle of red wine: this is one of the key moments of the trip because it is here that you’ll really get to know your traveling buddies, with whom you’ll share many a meal. On your way you’ll go through the villages of Mañeru and Cirauqui before crossing the Río Salado, a salty water river located some hundreds of meters away from Lorca, another picturesque village. An hour of walking away from Lorca sits Villatuerta, the last village before your goal, Estella, which you’ll reach after crossing yet another river. Estella (a.k.a. Lizarra in Basque, which literally means land of ash trees) has a remarkable artistic heritage in the form of churches and palaces, among which the Iglesia de San Pedro de la Rúa, the Palacio de los Reyes de Navarra and the Iglesia de San Miguel, all of which were built in the golden age of Estella, in the XIIth century.

Although there’s a number of churches, palaces and cathedrals from the Romanesque period in Spain, few people know about such hidden gems as those and they’re not as crowded as some of their bigger contemporaries. A walk around the village and a visit to at least one of these sites is the perfect way to relax after the long walk: trust me, your feet will thank you! 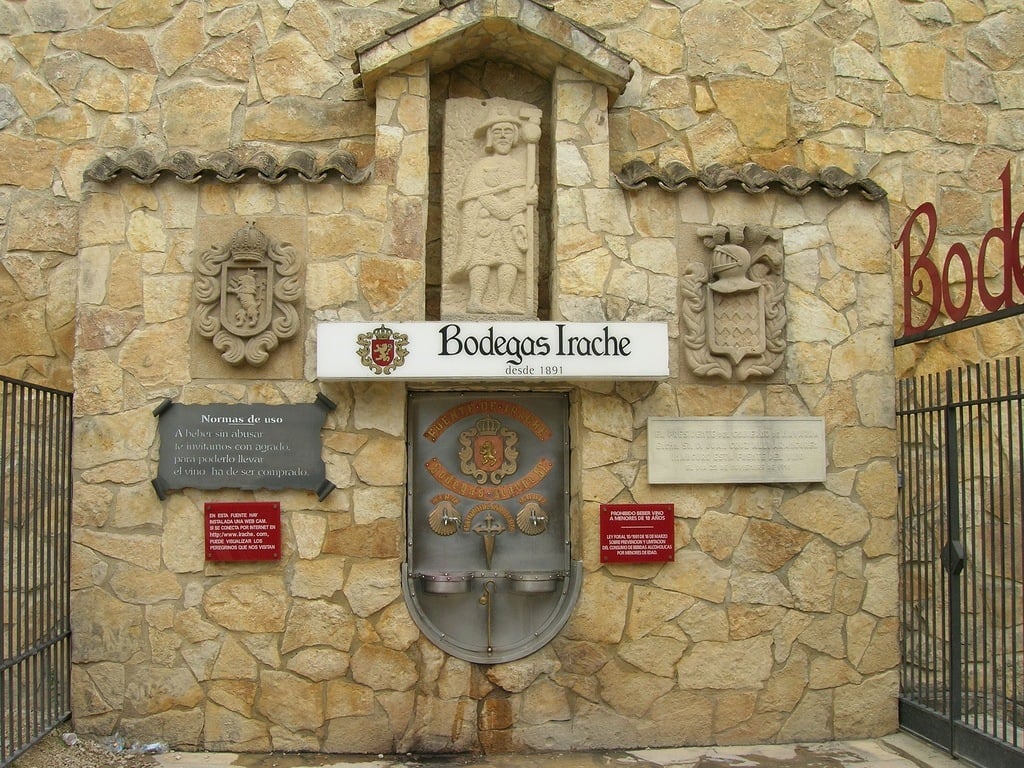 After saying goodbye to the medieval Estella it’s time to get ready to walk again: today your goal is Torres del Río, located 30 km (19 mi) away. This is a quite long stage, but the slope is not very big, so it should be doable, especially now that you already have two days of walking in your boots! And what’s more, you’ll see one of the main attractions of the area: the wine fountain right before the Irache monastery.

This fountain, which pours both water and wine, has been active since 1991 and it’s a solid proof of the wealth derived from the wine making in this area of Spain. After a good sip of red wine and a renewed spirit, you’ll cross the villages of Ázqueta and Villamayor de Monjardín before getting to Los Arcos.

Once there you should consider whether to spend the night in one of the hostels or to keep walking for some kilometers more to get to Torres del Río. Both choices are great, just listen to what your feet tell you and don’t force your body. If you decide to make it to Torres del Río, make sure you visit the church of Santa María de los Arcos, a pre-Romanesque church built in the VIth century. Torres del Río is a small village but it’s the perfect place to rest after such a long walk.

Get to Logroño, the perfect ending for your hiking 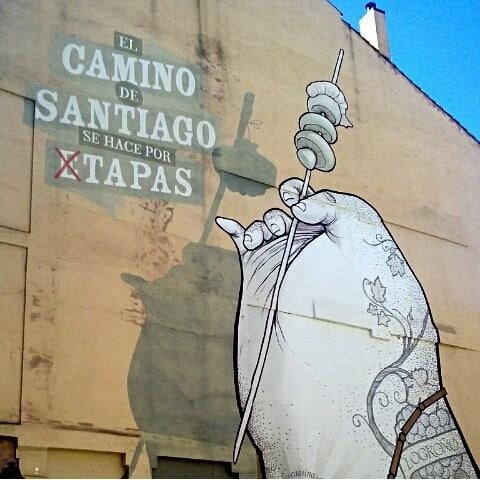 On your last day of walking you’ll encounter some cliffs before getting to Viana, the first village on your way today. Luckily, the trail is very flat and not very demanding. 15 kilometres (9 mi) after Torres del Río, you’ll see the border between the Spanish provinces of Navarra, which you’ll have crossed westwards for over 140 km (87 mi), and La Rioja, known worldwide for its excellent wines.

Logroño, located barely 5 km (3 mi) from the border, is the capital of La Rioja and home to some of the best Spanish food: its most famous street, Calle Laurel, is filled with little bars where you can try the local pintxos, always served with a cup of local red or white wine. If you’re a wine lover, this will be your paradise.

But Logroño is also home to some historic churches, such as the Iglesia de San Bartolomé, the Iglesia de Santa María del Palacio, the Catedral de Santa María de la Redonda and the Iglesia de Santiago el Grande. All of them are great examples of how powerful the Spanish Church was in Medieval times and during the reign of terror of the Spanish Inquisition. Logroño has also a big bus station where you can take buses to virtually any part of Spain: most people take a night bus and make the most out of their last hours in Spain by doing what locals call el otro camino, “the other way”, which is the route from one bar to another, from one pintxo to another, from one glass of wine to another. As the image above says, “El Camino de Santiago se hace por etapas”, what means “the Santiago Way” is done by stages” (and of course, the Way is also done by tapas).

Spain is one of the most visited countries in the world thanks to its metropolis like Barcelona, Madrid, Valencia, Bilbao or Sevilla, but there’s another Spain, one that seems half-asleep at first sight but that conceals some stunning churches and cathedrals, incredibly tasty food and wine, and extremely nice people. If you feel like experiencing this “other Spain”, the Camino de Santiago, especially the walk from Pamplona to Logroño, is what you’re looking for.

Explore Pamplona
Good things are meant to be shared!