Here is probably the most unique café you will ever step foot in, on Manseibashi bridge which runs alongside the Kanda river in Tokyo. With glass walls and trains that pass super close on both sides it is the “café that is closest to trains in the world”. Café “N3331” is built atop the platform of the old Manseibashi station which was closed almost 70 years ago. Definitely worth going for the masterpiece of a view, especially if you are a train lover. This isn’t a café to relax at. You’ll unwittingly gasp at this rare sight. Few are aware that there is a station between Ochanomizu and Kanda stations on the JR Chuo train line. Built in 1921, alongside the Kanda river which has always been a busy area since the Edo period is Manseibashi station. The name is derived from a bridge which spans the Kanda river.

The Hatsudai station barracks were designed by Kingo Tatsuno, in red brick who also designed Tokyo station. After Manseibashi station was open for business, the local trains started running and this area was bustling with people, almost as busy as ginza was at the time.

After Tokyo station was open and the fire damage from the Great Kanto Earthquake, the number of users of the station fell drastically, so about 70 years ago in 1943, the station was decommissioned. Later it became the Museum of Traffic (the predecessor to the Railway Museum in Saitama city), so some readers may remember visiting then.

A place you want to visit on a whim While retaining an elegance to it there are roughly 10 different shops housed in the viaduct interior. There is the wine shop popular locally, the coffee shop which only uses the best beans, or the goods shop that stocks traditional Japanese goods. The shops make up a gallery which just begs for exploration so coming on a whim is definitely fun.

Atop the viaduct is a unique little café that sits on the old platform of the station. N3331 is situated between the two tracks of the Chuo line on the old platform of Manseibashi station. Because of its position trains pass by super close on both sides of the café. Because of its glass walls its bright and feels liberating yet with the multiple trains passing danger close it is definitely the café closest to trains in the world.

Kids who love trains are just awestruck at the approaching cars. On a functions platform they would be in danger of falling into the tracks it’s so close. At this café they can get exhilaratingly close to the passing trains with a pane of glass safely keeping them in.

A must visit even if not a train enthusiast!! It’s likely that most of us have had a train pass very close to us and probably isn’t anything new to most. But because the café is lower than what we would usually be at in height the experience is very different. Even if you aren’t a train fanatic you should definitely check it out.

Every hour there is a time when trains going in opposite directions pass by at the same time, when that happens the whole café erupts in cheers.

In the day time it’s functions as a café but at night it morphs into a bar that stocks sake from all over japan. Having a cup of sake while watching trains go by at night is definitely something new. This shop is occasionally rented out for events so check the event calendar beforehand.

The café closest to trains in the world. The trains pass so close you can almost lock eyes with the passengers. Of course our eyes cant track such fast moving objects so locking eyes is impossible. It’s almost crazy to make a café where you might be uncomfortable if the trains are running slow because of an accident or something.

This is probably the only café in the world where you can feel this kind of excitement from just a passing commuter train. It is definitely worth visiting at least once. 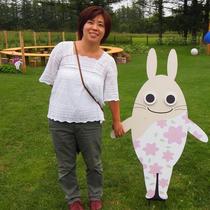