Uruguay is a South American city known for its beautiful beaches and rich history. Visitors in Uruguay can make a trip to the sunny Pocitos Beach for some sea, sun and sand, visit the Casapueblo Museum to appreciate works of contemporary art, or head down to the Solis Theatre for a night of performing arts and music. Uruguay is a culturally diverse and rich country, and is known not just for their wide array of fascinating tourist destinations, but is also known for being a melting pot of different ethnic groups, from 19th-century Spanish immigrants to more recent German immigrants. Its food, consequently, reflects Uruguay’s rich cultural diversity, with many fusion-style dishes that have Spanish, Italian and German influences. Should you visit Uruguay, you will get the chance to taste many local twists on European classics, from Asado, or barbecued meat, to Chivito, which is a loaded beef sandwich. Here are five amazing traditional food in Uruguay that you must try when you visit.

Uruguayans are all about the family, and one of their favourite dishes, the Asado, reflects this community spirit. To the locals, the Asado is not just a meal, but an experience that must be shared out in the backyard with family, friends and some good red wine. The person who prepares the meat is called the asador, and he or she typically begins by seasoning the meats with some salt. Uruguay has a large agricultural sector, allowing many Uruguayans to have access to fresh, home-grown meat. Uruguayans love their meats simple— not too many spices or fancy sauces typically go on their meat. The meat in question can also range from flank steak to pork ribs to mutton. Asado is often served with a side dish of salad topped with chimichurri sauce, a sauce of chopped parsley, dried oregano, garlic, salt, and paprika with olive oil. Chivito is the national dish of Uruguay. The Chivito is, in essence, a loaded beef sandwich, piled high with various vegetables and thin beef slices. The slices of beef in the sandwich are thinner than the average American steak, but not minced like a patty either, which is what makes the Chivito unique and worth a try in Uruguay. The thin slices of tender beef steak, or churrasco, are then piled onto a burger bun with mozzarella, tomatoes, mayonnaise, olives and bacon. It is also served with a large portion of fries at the side. Chivito was apparently invented in Uruguay. It is reported that the Uruguayan chivito was found in Punta Del Este, a small town in Uruguay, at a restaurant called “El Mejillón Bar”. In 1946, a woman from Argentina ordered a sandwich for a hurried meal, as she had to leave for the hospital soon to give birth to a child. The restaurant owner, Antonio Carbonaro, did not have any usual beef patties left and hence used beef fillet steak instead. Revuelto Gramajo is an Uruguayan take on french fries and has been described as one of the countries most quintessential dishes. This dish is typically made with either hash potatoes or french fries and is topped with cheese, eggs and vegetables. Revuelto Gramajo is a dish that is commonly eaten in Argentina and Buenos Aires too and was named after Colonel Artemio Gramajo, a former government administrator of Buenos Aires. Although it was meant as a dish to serve to soldiers on the battlefield, this dish has now become a staple in many Uruguayan households and restaurants, a perfect way to whip up a meal with some simple leftovers. An Alfajore is a traditional confection found in Argentina, Uruguay, Chile, Spain and the Philippines. Alfajores have been popular in Uruguay since the mid 19th century. In Uruguay, they are made with two round cookies with different sweet fillings between them, which is different from the Spanish version of the Alfajore, which is made of a single, thick cylinder of cookie. The filling is usually dulce de leche, although there are a lot of variations such as sweetened cream, strawberry jam or red velvet filling. They can be covered with powder sugar (the traditional ones), glazed sugar, grated coconut or chocolate. Often sold as street food, locals and tourists craving something sweet can simply drop by an Alfajore stall and purchase one as a late night snack or dessert.

In Uruguay, home and family always come first, and many of these dishes are best tasted at family-run restaurants and street trucks. Visitors to Uruguay will be spoilt for choice with the amazing array of traditional food available for them when they make a trip there. From delicious and affordable street food to home-cooked feasts in fine dining restaurants, there will definitely be a delicious food option that fits your budget when you are in Uruguay. 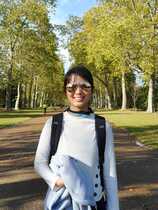 Ruth is a freelance writer and novelist who loves snuggling, skating, and all things matcha.
Want to contribute as a Local Expert?
Register Here
Hotels
Lowest Price Guarantee